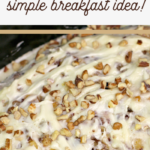 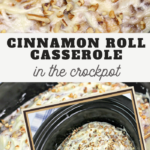 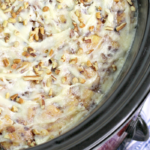 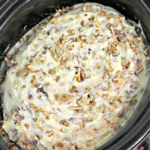 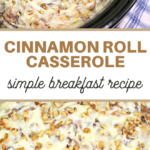 Ideal for breakfast, brunch or even as a dessert, you have all of the flavors of a delicious cinnamon roll with all of the ease of using a crockpot.

When it comes to breakfast or brunch, you can’t beat a cinnamon roll. Especially if you have a sweet tooth. This recipe is simple and easy to recreate, using only a handful of ingredients, and letting the crockpot do all the hard work for you.

When I first made this for my boys, there was sheer silence at the kitchen table. Everyone was just happily munching away and it felt good! We all love a cinnamon roll, but often we can get bogged down with endless ingredients or wait for them to bake to perfection in the oven.

While the crockpot does the work for you, it still only needs 2-3 hours on low. You could prep this the night before and set a timer for your crockpot so they are ready for breakfast. Or put them on first thing and enjoy a lazy brunch.

The icing that you sprinkle over the top just finishes it off. The sweetness with the sharpness of the cinnamon makes for one of the most delicious combinations. This Crockpot Cinnamon Roll Casserole creates soft cinnamon rolls with a golden brown glow over the top and edges. You can eat them as they come, or add delicious toppings to them.

What if my crockpot cinnamon rolls are gooey?

There is no exact science when it comes to using a crockpot and in truth, some will always cook things faster than others, even when in the same setting. The recipe calls for you to put the cinnamon rolls on low for around 2 and a half hours to 3.

If you do notice that the consistency is a bit off, such as gooey/soggy cinnamon rolls it just means they need a bit longer in the crockpot. They should be soft on the inside and golden brown on the outside. Just as you would expect if they were baked in the oven.

Reminder, not all ingredients in the Crockpot Cinnamon Roll Casserole are linked above, just the ones that may be a bit difficult to find or that you might be unsure of what to look for

When making Crockpot Cinnamon Roll Casserole at home, you really need to have the following Amazon affiliate tools on hand.

Thinking that now is the time to start meal planning? It totally is! Meal planning is the perfect way to use up leftovers or things you have in your pantry! Not only that but it saves you so much stress and time, too!

Once you make this Crockpot Cinnamon Rolls Recipe, you are certainly going to fall in love with the idea of using your crockpot more often. It saves time, effort, and also money. So I have picked out some of the best crockpot recipes for you to try.

Why not try this Crockpot Chicken Enchilada Soup? It is super tasty and perfect for a cold winter’s evening.

If you wanted something that you know the kids will love then my Kid-Friendly Crockpot Meatballs recipe is perfect for a mid-week meal.

Sometimes we just want a bit of heat and this Crockpot Cowboy Casserole recipe is certainly going to hit the spot. It certainly packs a punch.

On a cold day, there is nothing more satisfying than a hot chocolate, and this Crockpot Pumpkin Hot Chocolate could be just the ticket.

Sticking with the pumpkin theme you might want to try this Easy Crockpot Pumpkin Butter. It is delicious and can be used in many different ways.

If you like a bit of spice then this Simply Delicious Crockpot Chicken Chili recipe is a perfect dish to try.

Or better still, give my Crockpot White Chicken Chili recipe a try. It has a bold flavor and is a bit of a crowd pleaser.

How should I serve the Crockpot Cinnamon Roll Casserole?

There are plenty of ways you can serve the Crockpot Cinnamon Roll Casserole. I like to drizzle some warm maple syrup over the top but my boys like either a dollop of whipped cream or a scoop of vanilla ice cream.

You could also add some crispy bacon or even some fruit to the casserole before you switch on the crockpot. Apple or berries would work really well.

How do you store leftover breakfast casserole?

Storing leftover breakfast casserole can be a simple task if done properly. It is important to allow the casserole to cool and then immediately store it in an airtight container or wrap it tightly with plastic wrap or aluminum foil.

The container should be placed in the refrigerator as soon as possible, ideally within two hours of cooking. The casserole should then last in the fridge for four days, although any leftovers beyond that length of time should be frozen for safe consumption at a later date.

When freezing, it is advisable to separate the casserole into smaller portions so that you can thaw just enough for individual servings when needed, thereby limiting waste and ensuring a safe meal without compromising food quality.

What other ingredients can be added to cinnamon roll casserole?

The ingredients list for cinnamon roll casserole is by no means prescriptive, and there are plenty of potential additions that can add flavor and depth to the overall dish.

Raisins, diced apples, tart-dried cherries, or chopped dates can all be incorporated to lend sweetness, while pecans, walnuts, and almonds can be added to give a savory crunch.

For additional texture, consider including caramels or even bits of cereal such as Rice Krispies. The possibilities truly are endless – with so many available options at one’s disposal, anyone can craft the ideal version of cinnamon roll casserole to their tastes.

Can I prep cinnamon roll casserole in advance?

Preparing a cinnamon roll casserole in advance can be an attractive choice when time is short. The basic steps of this recipe involve combining rolls, butter, and sugar in a casserole dish before baking the mixture and adding icing afterward.

Depending on the desired results, different variations of the method can be used at any stage, for example, changing from canned rolls to homemade ones or altering which type of icing to use.

Preparing the entire dish in advance not only eliminates the hassle before serving but also allows flavors to meld as they sit before baking.

If prepped ahead of time, be sure to store in a cool area and always check that the ingredients are still fresh before baking.

How do I know if the cinnamon roll casserole needs to bake longer in the oven?

When baking cinnamon roll casserole, it is important to determine whether or not the casserole has been cooked through. You can use a toothpick to insert it in the center. If it comes out clean, the casserole should be done and ready to remove from the oven.

As a general rule of thumb, it is also recommended to keep an eye on the browning of the cinnamon rolls to avoid burning.

The edges and the top will turn golden brown when it’s done baking.

Keeping all this in mind, one can easily determine when their cinnamon roll casserole is done and ready for consumption.

If the cinnamon rolls are looking a little gooey then let them cook for longer.

Would you prefer the Crockpot Cinnamon Roll Casserole for breakfast, brunch, or dessert?

This recipe sounds amazing and of course delicious. Great way to serve comfort food to the family. This post will be a feature this week. #HomeMattersParty

That looks amazing! What a great idea!