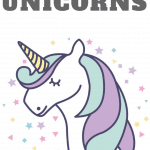 Finding quotes about unicorns doesn’t have to be hard! In fact, there are so many out there that we had trouble narrowing it down to just a few!

Unicorns are mythical creatures that have been at the forefront of children’s minds for years and years. And why not? They’re beautiful, magical, and have wings and horns!

Who wouldn’t want to fall in love with one and have them as a pet? The great part about unicorns is that they can take on different shapes and forms with the imagination of a child. One child may have a white unicorn, while another may decide it’s pink.

And at the end of the day as long as they are using their imagination, who are we to tell them that they have to imagine their unicorn one way or another? As if unicorns weren’t already amazing enough, here are some great quotes about unicorns that are just too good to not share!

Quotes about Unicorns That Will Make You Love Them Even More

“Unicorns are real! They’re just fat and grey and we call them rhinos.”

This unicorn quote is meant to be humorous of course, but perhaps…just maybe, this person is a non-believer!

Isn’t that the truth? We live in a world where unicorns are mythical creatures, but more than likely in their world, we’re mythical to them as well.

“A wise man never plays leapfrog with a unicorn.”

Truer words have never been spoken.

“Today it is said that the unicorn never existed. However, it is marvelously clear that when the unicorn was first described and centuries later when the tapestries were woven, everyone believed in unicorns.”

Even now, kids of all ages still believe in the power and the beauty of unicorns. And why not? Their beauty and enchantment have continued to feed the imaginations of children all over the world.

Yes, just yes. If you can be a unicorn, be one. Fly high above the clouds and rule with the magnificent horn on your head.

“All the beasts obeyed Noah when he admitted them into the ark. All but the Unicorn. Confident of his own abilities, he boasted “I shall swim”.

Could this be the reason for the extinction of the unicorn? One plausible theory I would assume…

“Their bodies are white, their heads dark red, and their eyes dark blue. They have a horn on the forehead which is about a foot and a half in length.”

Maybe this is from one of the first sightings ever of a unicorn…or maybe it’s from the imagination of a child or adult. Regardless, it puts a fun visual on your brain on how unicorns can look!

This is so sweet and pure, and true. As long as there are dreams, there can and will be unicorns. It’s when we start to try to rationalize everything that the magic also begins to disappear.

These unicorn quotes are fun, simple and inspiring. If you love unicorns, keep on loving them!

And if you believe that they are real, keep on believing!

But if you find that you’re skeptical, keep those thoughts and opinions to yourself because there’s nothing like the beauty of believing in pure, innocent and beautiful magic.

As these unicorn quotes will show you, there’s just something amazing about unicorns.&nbsp;