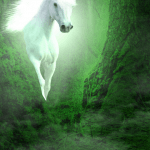 These magical Unicorn quotes are certain to make you love unicorns even more. If you’re constantly amazed by the magic and beauty of unicorns, you won’t want to miss out on these great quotes.

There’s just something magical about unicorns. And that magic and curiosity will never go away.

The good news? It doesn’t have to. There is literally so much fun and joy in believing in magic and unicorns.

Plus, why not? We could all use a little imagination and creativity in our lives to bring us happiness. Luckily, unicorns deliver on that happiness every single time.

If you love unicorns or are just curious about them, these motivation unicorn quotes may be of interest to you! Some are silly, some are serious and some talk about the beauty and magic.

“Be a unicorn in a field full of horses.”

Dare to be different. Dare to be magic. Stand out and be who you want to be.

“If you’re lucky enough to be different, don’t ever change.”

Unicorns embrace their magic, why can’t you? Every single one of us has a bit of magic inside.

“Everything is better with a unicorn.”

This is because unicorns are magic and magic is awesome.

But…unicorns can fly. That’s the thing. Their magical powers lift them high up into the sky to keep watch over all of us below.

“Dreams are the playgrounds of unicorns.”

How beautiful and magical does this sound? Unicorns get to spend their days literally galloping about in our dreams and imagination. If that isn’t magic…I don’t know what is.

“I was bathing in a lake when I saw the unicorn…. It is an injustice to say merely that its coat was white. Oh, it was white, all right, but it was more than that.

It was a white like I remember the best vanilla ice cream, but finer and smoother. Sometimes the sun hit it just right and bright rainbow crescents fanned out like light through a fine spray of water.

The hooves were mirror bright- platinum or silver, I couldn’t tell.

A distant lighthouse beacon on a lonely night, the spiral horn rose from the noble head: milky white, warm and welcoming….

Eyes full of life and intelligence. Eyes I could fall into. Lover’s eyes…. As it moved, the mane shimmered on its muscular neck like a road on a hot day.”

What if you believe in something but others don’t? There’s something amazing and magical about the description of this unicorn….it’s so detailed that you can almost vividly see it standing there in the lake.

“Of all the legendary animals of art, folklore, and literature, the Unicorn is the one with the greatest hold on our imaginations. Other fabulous beasts are clearly inventions, existing only in a mythical landscape of our own collective creation. But the Unicorn strikes us as more than imaginary. It seems possible, even probable – a creature so likely that it ought to exist.”

Do you believe in magic? Because unicorns could be your deciding proof. Those who love unicorns love them so much, that they feel that there is no reason that they shouldn’t exist.

These magical unicorn quotes are one way to keep unicorns playful and on the forefront of your mind. They are magical, they are “real” to some, and they are mythical creatures to others. One thing that everyone can agree on? Believing in unicorns, whether they are real or not, is magical all in it’s itself.

So, what do you say? Do you believe in the magic of unicorns?