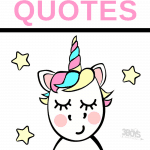 Unicorns always grab our imaginations. There are so many stories about this mythical creature that we can’t help but poke fun at them occasionally.

We have found a few funny unicorn quotes that are perfect for when you need to keep a light mood in a conversation or to send as a joke.  They are so funny that I almost fell off my unicorn when reading them. 😀

Either way, these funny unicorn quotes can help to keep a conversation light.

“I like Unicorns. Unicorns are just weaponized ponies.” – Damon Suede

“I love nonsense; it wakes up the brain cells. Fantasy is a necessary ingredient for living.” – Dr Seuss

“When I look myself in the mirror, I see a unicorn—a bad a$$ unicorn.” – Sebastien Millon

“But it isn’t a rough draft either. The one I turned in several months ago was rough. There were some bad plot holes, some logical inconsistencies, pacing problems, and not nearly enough lesbian Unicorns.” ― Patrick Rothfuss

“You are like a Unicorn that brings ice-cream; you are too good to be true”

“I found the hum of his computer rather soothing, but it was the complete lack of unicorn carcasses that really pulled the room together.”

“No one can vouch for the origins of the medieval proverb, ‘No true virgin plays leapfrog with a unicorn in the forest on a spring night.’” – Muriel Segal

“That is exactly what heroes are for. Wizards make no difference, so they say that nothing does, but heroes are meant to die for Unicorns.” – Peter S. Beagle

“There are Unicorns all over everywhere, even Woodmont. You know that, I know that, maybe nobody else does. You look for them, you listen for the music, and you listen for Shei’rah. It’s somewhere; you’ll find it, if you want to find it enough. You got time.” – Peter S.Beagle

“To this day, it is said, malicious animals poison this water after sundown, so that none can thereupon drink it. But early in the morning, as soon as the sun rises, a Unicorn comes out of the ocean, dips his horn into the water to expel the venom from it so that the other animals may drink thereof during the day. This as I describe it. I saw it with my own eyes.” – Johannes van Hesse of Utrecht; 1389

“You try reading fantasy books all your life – have a Unicorn walk by your bus bench on a hot day, with everything you’ve ever wanted tied up in a neat bundle- and see if you wouldn’t do almost anything to have it.” – Steven R. Boyett

Here is my favorite: Me? Crazy? I should get down off this unicorn and slap you!!