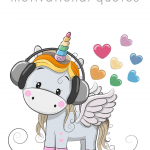 These Unicorn Motivational Quotes are just what you’ll need to put one foot in front of the other and tackle the day. Sometimes, thinking like a unicorn is the best thought process there is.

If you love unicorns, welcome. There are so many people in the world that are interested and in the wonder of the mythical creatures.

People from all over the world imagine them, dream them and want to be like them in so many varying ways. From kids to adults, unicorns are a hit every single year.

And while you may love the beauty of them, did you know that unicorns can also help to motivate? As a matter of fact, these unicorn motivational quotes are ones that you may feel fit you and your current mood and needs perfectly.

“Do you know, I always thought unicorns were fabulous monsters, too? I never saw one alive before!” Well, now that we have seen each other,” said the unicorn, “if you’ll believe in me, I’ll believe in you.” ~ Lewis Carroll

And isn’t that what we all need to feel motivated? To have someone, anyone, take the time to believe in us?

It’s possible for anyone to be a unicorn and have their own point of view, right? All you need is a bit of courage and direction to make it happen.

“There is something about riding a unicorn, for those people who still can, which is unlike any other experience: exhilarating, and intoxicating, and fine.” ~ Neil Gaiman

Never lose that hope and desire to ride a unicorn, ever. Allow yourself to be you and to gulp up life at a ravishing speed.

The unicorns were the most recognizable magic the fairies possessed, and they sent them to those worlds where belief in the magic was in danger of falling altogether. After all there has to be some belief in magic- however small- for any world to survive. ~ Terry Brooks

Yes!  You have to have at least a tiny bit of belief in magic – otherwise, you stop believing that anything can happen and positivity goes out the window!

Another reason to take the time and believe in something and believe in yourself. If you can’t find a way to motivate yourself, you’ll lose that unicorn spirit animal living inside of you.

“Unicorns are immortal. It is their nature to live alone in one place: usually a forest where there is a pool clear enough for them to see themselves-for they are a little vain, knowing themselves to be the most beautiful creatures in all the world, and magic besides. ~ Peter Beagle

Even if you live alone, or like to be alone, you are enough and beautiful to do so. Think like a unicorn, be like a unicorn and motivate yourself to be magical.

“Take criticism, smash it into dust, add color & use it to paint breathtaking images of unicorns frolicking thru endless fields of greatness” ~ Matthew Gray Gubler

Don’t let anyone or anything get you down. Criticism will happen and when it does, turn it into the unicorn dust that you love and adore. Nobody can hold you down when you’re following your dreams!

What makes unicorns so motivational?

What is it about unicorns that people love and adore? In a nutshell, it’s their ability to just “be”. While unicorns are beautiful creatures, they love the fact that they can stand on their own. They don’t need or want anyone or anything to help them and they’ve paved their way to greatness with ease.

“If you can be anything, be a unicorn.”

Motivate yourself to stand out from the rest of the crowd and be proud of it.