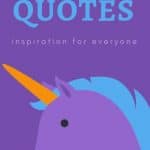 When you think about Unicorns, what comes to mind? Magic, hopefulness, beauty, and enchantment might be a few words that you’re thinking…

From children to adults, no one can deny that unicorns are truly a magical and beautiful fantasy.  No matter who you talk to or ask, everyone has some sort of fond memory about unicorns.

Unicorns are amazing creatures that allow us to believe in things that we can’t see. When it comes to trying to find inspiration in your everyday life, here are some inspiring unicorn quotes to help you along the way.

Inspiring Unicorn Quotes for Everyone:

From dreams to daydreaming, the “realness” of unicorns is always a question or a thought in everyone’s mind at some point in time in their life. With good reason, too!  Below you will find the quote as well my interpreted meaning.

“Be a Unicorn in a Field Full of Horses” – unknown

Be proud to be different! It’s the things that set us apart that propel us forward.

“Now I will believe that there are unicorns” – William Shakespeare

Allow your inner-child to believe in things such as unicorns. It’s simple, if you try.

“Life’s not easy for unicorns, you know. We’re a dying breed.” – Meg Calbot

It takes a strong person to stand tall against the crowd.

“Sleep is like the unicorn – it is rumored to exist, but I doubt I will see any.” – Dr. Seuss

If you believe it, it can happen!

“A friend told me I’m delusional. I almost fell off my unicorn.” – unknown

Not everyone will believe, and that’s okay! It’s not your job to make them.

“Rhinos are just fat unicorns. If we’d give them the time and attention they deserve, as well as a diet: they’d reveal their majestic ways.” – unknown

Keep the faith in what you believe about unicorns. Anything is possible with magic.

“Everything is better with a unicorn.” – unknown

Said every child, every where.

If you believe, they’ll believe.

“Unicorns can’t fly. I can’t fly. Therefore I am a unicorn.” – unknown

You can be anything that you put your mind to.

Be aware of your surroundings in life and you’ll go far.

“The unicorn is not known for its horn, beauty, or purity; But for its strength and courage as one.” – Nicole Beckwith

As long as you let that belief linger, unicorns exist.

“The unicorns were the most recognizable magic the fairies possessed, and they sent them to those worlds where belief in the magic was in danger of falling altogether. After all, there has to be some belief in magic- however small- for any world to survive.”

Never stop believing in the beauty and the power of unicorns.

Whatever you think, feel, or believe about unicorns, it’s simple to see how awe-inspiring they truly are as well.

Unicorns are not only magical, but they allow us to dream and think outside of our selves and our daily lives. When’s the last time that you sat down and thought about something from your childhood memories that truly brought your happiness?

If unicorns are one of those things that you loved growing up, why not keep that love growing by enjoying some of these inspiring unicorn quotes.

As you get older, you may start to believe that unicorns don’t exist, but remember:  just because you can’t see it, doesn’t mean it isn’t real.