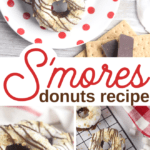 This Smores Donuts Recipe has me drooling, ready to make another batch again–and it’s been less than a day since I made the first. I have to do it again, I have to make smores doughnuts. It’s official. You’re not going to want to miss these awesome smores recipes!

If you’re just jonesing for more s’mores, I have so many that are so crowd-pleasing, they’ll be asking you for more.

Back to these smores doughnuts, though–they’re freaking amazing. Just look at all that fluffy donut, graham cracker and marshmallow glaze. That right there is perfection.

I for real can’t wait to make another batch. Let’s get you baking. Try these Over 30 Sweet Smores Recipes too!

How to Make S’mores Donuts

I like to start making donuts by preheating my oven to 350 degrees, spraying the donut pan with cooking spray. If all you have is a baking sheet, forget about making donuts. Plan on making something else. Because you really have to have a donut pan to do this. Or a mini-donut maker, that would work, too.

Once that’s done, I go ahead and whisk together my sugar, baking soda, flour and salt in a small bowl; and I put the wet ingredients together in a medium bowl.

I combine the dry with the wet ingredients then put it in the pan. Now, I can manage this pretty well with a small spatula, but if you don’t have a small spatula, you can use a piping bag or a ziplock bag with the corner cut off. That way you don’t make a massive mess on the top of your donut pan.

Then it’s time to bake. I always do 8 minutes, then check every minute thereafter. Once a toothpick inserted in the center of the centermost donut comes out clean, you can pull the donuts out of the oven and let them cool on a cooling rack.

While they’re cooling, I make the glaze by combining the marshmallow creme, salt, milk, powdered sugar and butter (not melted butter, just room temperature). Then I dip the tops of the cooled donuts in the glaze, immediately followed by doing a sprinkle with graham cracker crumbs.

Repeat with remaining donuts and you’re all set for breakfast!

A donut is a type of fried doughnut with a hole in the center. It is usually ring-shaped, and there are many variations on the basic recipe.

Most donuts are made from a sweet dough and fried in vegetable oil, but there are also baked versions of donuts that are meant to be fried.

Can you bake donuts that are meant to be fried? The answer is yes, but the results may not be what you expect.

Baked donuts will be denser and cake-like, rather than light and fluffy like their fried counterparts.

Reminder, not all ingredients in the Smores Donuts Recipe are linked above, just the ones that may be a bit difficult to find or that you might be unsure of what to look for

When making Smores Doughnuts Recipe at home, you really need to have the following Amazon affiliate tools on hand.

Once you make this S’mores Donuts Recipe, you’ll see just how fabulous it is to have a s’more that’s totally non-traditional. You get the chocolate and graham cracker goodness with all the toasted marshmallow you can stand–perfection. So, if you’re craving it, here’s the best s’mores recipes around:

Why are they called smores?

The origin of the word “s’more” is unknown, but there are several theories. One popular theory is that it is a contraction of the phrase “some more.”

This makes sense, as the treat is often called out as an after-dinner dessert or a late-night snack. It’s possible that the word was originally used in campfire settings, where marshmallows and graham crackers were plentiful but chocolate was not.

Thus, s’mores would simply be marshmallows and crackers with “some more” chocolate added in.

Another theory posits that the word is derived from the Latin word for Mars, the Roman god of war. This theory arose from the fact that s’mores contain marshmallows, which are often associated with marshes.

However, there is no evidence to support this theory. Ultimately, the true origins of the word “s’more” remain a mystery.

If you’re just here for the donut, I do not blame you. Donut’s are pretty much the only breakfast for me that trumps the awesomeness of coffee cake. So I get it. Here are the best donut recipes EVER:

Why are they called Donuts?

The word “donut” is believed to have originated in the early 19th century. The earliest known use of the word appeared in a local newspaper in 1808, in reference to a type of cake made from yeast-raised dough.

It wasn’t until around 1870 that the term began to be used to refer specifically to a fried doughnut shaped like a ring.

The origin of the term “doughnut” is unclear, but it is thought to be derived from the Dutch word “dunnebrood,” which means “cake bread.”

Given the close similarity between Dutch and English, it’s likely that the term was Americanized over time to become “doughnut.”

Whatever its origins, the word “doughnut” has become synonymous with these delicious treats.

Ingredients for the Donuts:

Ingredients for the Glaze:

!Instructions for the Donuts:

!Instructions for the Glaze: