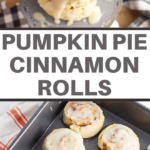 Don’t miss out on this Pumpkin Pie Cinnamon Rolls Recipe. If you love pumpkin everything, these are some of the best cinnamon rolls, ever. You can’t beat the taste and flavor of these pumpkin pie spice rolls. Even though they double in size when you bake them, you still may want to keep them all for yourself! It’s literally one of the best Easy Pumpkin Recipes, ever.

No judgment from me. Once you get that cream cheese frosting drizzled over the top, you’ll be in cinnamon roll heaven.

While these rolls are baking, brew yourself a cup of coffee to pair up with and enjoy!

Have you ever had a cinnamon roll as big as your face? If not, get ready. This simple roll recipe is going to have you doing a double take as they raise up and grow after 30 minutes of resting. These are literally one of the easiest breakfast recipes, ever!

Using a dough hook is the best way to get this cinnamon roll dough ready to be baked. It mixes it well but doesn’t over mix and results in a great texture, too. Then once you add in the combination of brown sugar and cinnamon, you just might start salivating!

Don’t forget to let the rolls get to room temperature once done baking so that you can easily add on the cream cheese icing without it melting off!

Even though I’m always tempted to make up this recipe for myself, my boys really love it as well. And since I’m that type of caring and sharing person, I’ll always have a few left especially for them.

Is canned pumpkin and pumpkin puree the same thing?

It’s not. Pumpkin puree is pretty much like it sounds – pureed pumpkin. But buying canned pumpkin can mean that it’s also mashed up squash instead of actual pumpkin.

Reminder, not all ingredients in the Pumpkin Pie Cinnamon Rolls Recipe are linked above, just the ones that may be a bit difficult to find or that you might be unsure of what to look for

When making Pumpkin Cinnamon Rolls at home, you really need to have the following Amazon affiliate tools on hand.

If you’ve been on the fence about meal planning, don’t waste another day waiting. I’ve been meal planning for years and it literally saves my sanity every day. Being able to know what I’m making for dinner ahead of time is also comforting to my family, too.

Vegetable Side: Asparagus on the George Foreman Grill

Once you make this Pumpkin Spice Breakfast Rolls Recipe, you’re going to be craving that taste of bread! All you need to do is whip up these simple bread recipes below and you’ll love them just as much as I do.

Blueberry Banana Bread is another recipe is great for breakfast or as a tasty dessert.

Hawaiian Bubble Bread will have you loving that tropical taste.

This Gluten-Free Pumpkin Bread is a tasty and worry-free recipe.

I’m a big fan of the flavor of this Blueberry Lemon Bread!

Add this Maple Glazed Pumpkin Bread to your baking radar!

Wild Rice and Cranberry Bread is perfect for holiday dinners!

This is such a good variety of Cake Mix Bread Recipes.

What is the best way to reheat leftover cinnamon rolls?

As cinnamon rolls age, they will start to dry out a bit. The easiest way to reheat them is to add them to the microwave for a short amount of time. Just a few seconds will have them soft and moist again in no time at all.

So the question remains…are you going to make these Pumpkin Pie Cinnamon Rolls for yourself or share them with others?