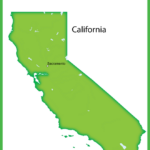 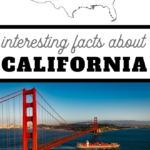 These interesting facts about California include motion pictures, bridges, the Gold Rush, the birthplace of the internet, and the biggest trees in the world. Find some fun crafts, activities, and books for each state that will engage kids of all ages.

This is part of the 50 states unit study as we travel around America, learning about the history of each state. Check out these California facts for kids below!

California is on the Pacific coast and features mountains, beaches, valleys, deserts, and is bordered by three other states. The capital is in Sacramento and it has the highest population of any state in The United States. It became a state in September of 1850 and is known as The Golden State. Here are some fun and interesting facts about California that your kids will love.

California has seen the Gold Rush, the start of the internet, the creation of the Golden Gate Bridge, the first motion pictures, and the biggest tree species in the world.

Fact One: The first motion picture theater was opened in Los Angeles in 1902

Tally’s Electric Theater was built in 1902 and started showing The Great Train Robbery in 1903. It cost 10 cents to view showings which were often sold out. This is the first of many theaters that opened in the country.

Try your hand at charades with these 201 Charades Movies Ideas.

Have you ever wondered, How are Movies Made? This interesting and factual book will teach you all you need to know.

Learn How To Make a Lego Catapult from the Lego Movie. Get the free Printable Disney Themed Charades Game for Kids.

The Golden Gate Bridge is an almost two-mile-long suspension bridge that was built in 1917. The architecture design was completed by Irving Morrow and the Engineering design was done by Joseph Strauss. It connects San Francisco to Marin County on the northern tip of the San Francisco Peninsula.

Learn How to Make a Golden Gate Bridge for your Garden and get your kids involved.

Get your kids to color these Golden Gate Bridge Bookmarks.

Read all about The Golden Gate Bridge in this fun book.

Learn How to make your own Golden Gate Bridge Collage in this fun STEM activity.

Have a sweet tooth but want to make it a learning opportunity? Bake your own Golden Gate Bridge Sugar Cookies.

Fact Three: The Gold Rush started in 1848 in California

When gold was found by James W. Marshall in Coloma, California, it kicked off a mass migration of over 300,000 people across the United States and other countries to dig for gold. These “forty-niners” survived many hardships to get to California and attacked local people when they believed their land contained gold. Because of the boom in people, California was officially made a state in 1850.

Help your kids Build a raft in this STEM challenge.

Learn all about the gold rush in this Gold Rush Unit Study.

Read this book to learn: What Was the Gold Rush?

Plan the most amazing birthday party with this activity: How to throw a Gold Rush party

Fact Four: The Internet was created in Silicon Valley

Leonard Kleinrock, professor of computer science at UCLA, sent the first message over the Arpanet in 1969. “Arpanet” was later changed to “internet” and it was connected to four universities in the beginning. It then expanded to other universities and businesses and became what we know it as today.

Fill out these Printable Ralph Breaks the Internet Activities for some internet-based fun.

Learn How to be Internet Awesome with fun, games, and safety.

Learn how to code with this awesome book: Coding for Kids: Python: Learn to Code with 50 Awesome Games and Activities

Use these Coding Activities for kids without a computer to let your kids get a head start on coding.

Typing is one of the most important things for kids to learn. Get them to try these free typing games for kids.

Fact Five: The Giant Sequoia called “General Sherman” is the largest living organism on the planet

Giant Sequoias live up to 3,000 years with bark that grows three feet thick. They generally reach up to 311 feet, which is shorter than other trees but are incredibly wide. This width is what makes them the largest trees in the world.

Fill out this Printable Oak Tree Life Cycle Activity to learn all about the Oak tree.

These huge trees are fun to learn about with these Sequoia Trees Facts & Worksheets.

Read this magical story about these trees: The Tree Guardian: A Tale of the Sequoia Forest

Learn how leaves change color with this fun STEM activity: 8 fun science activities for kids about leaves. Paint with leaves with this Chlorophyll Paintings activity.

You have a real talent for writing unique content. I like how you think and the way you express your views in this article. I am impressed by your writing style a lot. Thanks for making my experience more beautiful. I read your post it really admirable and I appreciate your efforts. I hope you will get a great response from viewers. Keep doing remarkable work and have a nice day . Thank you because you have been willing to share information with us. Nice post. I learn some thing tougher on distinct blogs everyday