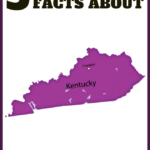 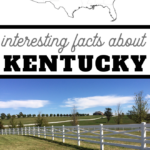 These interesting facts about Kentucky for kids include one of the longest river systems in the U.S., Abraham Lincoln, baseball, and Fort Knox.

This is part of the 50 states unit study as we travel around America, learning about each state’s history. Check out these Kentucky facts for kids below! Find some fun crafts, activities, and books for each state that will engage kids of all ages.

Kentucky is in the south-central part of the United States and along the west side of the Appalachian mountains. The capital is Frankfort, and it’s known as The Bluegrass State. It became a state in 1792 as the 15th state to enter the United States.

Fact One: More running water than any other state except Alaska

Kentucky has thousands of miles of running water going through the state, including the Ohio River and the Kentucky River. This makes the state incredibly green for most of the year. Plants and animals flourish in Kentucky because of all the freshwater.

President Abraham Lincoln was born in Hodgenville, Kentucky in 1809. He was the 16th president of the United States and had a career as a lawyer and politician. He was a major advocate for abolishing slavery and enacted the Emancipation Proclamation.

The first Louisville Slugger bat was manufactured in 1884 and you can take a museum and factory tour of the building. You can miss it, there’s a 120-foot steel bat outside the museum!

Fort Knox is an Army base that was named in honor of Henry Knox. It contains an estimated 260 billion dollars of gold on the 109,000-acre property. Half of the nation’s gold reserves are protected by the United States Mint Police and was built in 1936 by the Treasury.

The oldest held horse race in the country is at Churchhill Downs on the first Saturday of May every year in Louisville, Kentucky. It follows two weeks of festivals and is known as the “Run for the Roses.” This Grade I stakes race competes thoroughbred horses on a one-and-a-quarter-mile track.

Thanks The points you have mentioned are worthy to follow. please keep publishing the same Read - Viral Marketing