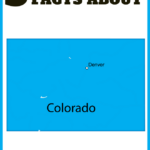 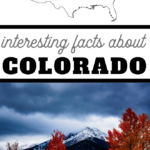 These interesting facts about Colorado for kids include the Colorado River, the Denver Mint, the gold rush, dinosaurs, and the Continental Divide. Find some fun crafts, activities, and books for each state that will engage kids of all ages.

This is part of the 50 states unit study as we travel around America, learning about the history of each state. Check out these Colorado facts for kids below!

Colorado is covered with the Rocky Mountains and plains and is the 21st most populated state in the United States. The capital is Denver and it is known as The Centennial State. Colorado became a state in August of 1876 which was exactly 100 years after the signing of the Declaration of Independence.

Fact One: Colorado was named after the Colorado River (color red)

Colorado means “color red” in Spanish and the state was named after the Colorado River which flows through part of the land. It became a state in 1876, exactly 100 years after the signing of the Declaration of Independence.

Study up on what makes Colorado awesome in this Colorado Unit Study.

Read Welcome to Colorado with information about the state’s animals, plants, regions, food, people, customs, and fun places to visit.

This awesome Flower Craft for Kids: Rocky Mountain Columbine will bring out the creative side of your kid.

Fact Two: The Denver Mint is one of the largest in the United States

After gold was discovered in Colorado in 1858, Congress established the Denver Mint. Coin production began in 1906 and continues today. The Denver Mint was added to the National Register of Historic Places in 1972. It produces commemorative coins as well as regular coins that are distributed to banks around the country.

Try the Coin Toss Game with your kids today!

Help your kids learn how to recognize coins with this game: Coin Recognition Match Game.

Read this informative book about coins for kids: National Geographic Kids Everything Money: A wealth of facts, photos, and fun!

Drop water on coins to see how much they can hold with this activity: Drops on a Coin: A Preschool STEM Activity

Use a muffin tin and cupcake holders in this fun and unique game: Brilliant Coin Value Recognition and Counting Activity

Fact Three: The Pike’s Peak Gold Rush was one of the greatest gold rushes in North American history

When gold was discovered in 1858 in Colorado, over 100,000 people migrated to the area to search. The gold rush in Colorado was about 10 years after the California gold rush and was about 85 miles north of Pike’s Peak mountain in areas like Denver, Boulder, Central City, Black Hawk, Georgetown, and Idaho Springs.

Learn all about the gold rush in this unit study: Gold Rush Free Unit Study.

Make your next birthday party awesome with these steps: How to throw a Gold Rush party

Make a beautiful Gold Rush Frame with this activity.

Fact Four: The first Stegosaurus and Apatosaurus bones were found in Lakewood, Colorado

Dinosaur bones were first discovered in Colorado on what is now known as Dinosaur Ridge outside of Morrison, Colorado. Arthur Lakes, an instructor at the Colorado School of Mines, found large bones in 1877 which were later found to be Allosaurus, Apatosaurus, Diplodocus, and Stegosaurus bones.

Make your own dinosaur fossils with this activity: Dinosaur Fossils for Kids Activity.

Paint your heart out with this Dinosaur Silhouette Art activity.

Read The Big Book of Dinosaurs that is full of detailed artwork and photographs of lifelike models.

Play with your preschool kids with this STEM activity: Hatching Frozen Dinosaur Eggs.

This ridge runs from Alaska all the way through Mexico to the gulf. It’s a place where water runs down either side of the ridge and flows in rivers and streams to completely separate oceans. In this case, the Pacific ocean, and the Gulf of Mexico. The Great Divide in Colorado is one of the few places you can drive right across the divide.

Learn about Colorado with this Colorado Worksheet Pack.

Get out the kid-proof scissors and make this Tissue Paper Campfire Craft.

Use cotton balls and construction paper to make Colorado mountains in this Watercolor Snowy Mountain Scene.