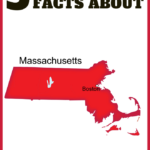 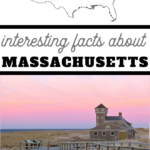 These interesting facts about Massachusetts for kids include the Salem Witch Trials, the first subway system, Benjamin Franklin, and basketball.

Massachusetts is on the eastern coast of the United States and has the nickname, The Bay State. It became a state in 1788 and was the 6th state inducted into the nation. The capital is Boston and was the center of culture for many years in this country’s early stages.

Fact One: The Salem Witch Trials were held here

The mass hysteria of the Salem witch trials took place in 1692 and 1693 in Salem, Massachusetts. More than 200 people were accused and 25 people died as a result. This tragic time in history should be remembered and never repeated.

Fact Two: The first subway system was built in Boston

The first subway system was built in Boston, Massachusetts in 1897. It had four tracks and is now a National Historic Landmark. It was the beginning of an extensive subway system in the United States.

Benjamin Franklin was born in Boston, Massachusetts in 1706. He was a scientist, newspaperman, freemason, author, and inventor. He was one of the Founding Fathers of the United States and helped develop the Declaration of Independence.

Fact Four: The first basketball game was played in 1891

Basketball was invented in Springfield, Massachusetts in 1891 by James Naismith. This sport grew very popular after it was introduced at colleges in the country and is now a major part of American culture. This is also where the Basketball Hall of Fame is located.

Harvard University was established in 1636 as the first college in the country in Cambridge, Massachusetts. It’s one of the most prestigious schools in the world and accepts only top-tier students. It also has one of the largest library systems in the world with 79 libraries and over 20.4 million items.

If you’re looking for an experience that will leave a lasting impression on your heart, head over to this little slice of paradise of world, like switzerland, canada, Greec, spain, Ireland etc.

"Hi all, This blog will help me and lots of people, I have learned Digital marketing from the Premium Learnings system, which helps me to grow and make a career in Digital Marketing.

Premium Learning Systems have established a strong foothold in the domain of training with our phenomenal results. Till date, more than 25,000 students have been a part of this journey that has enhanced their skills and enlightened their career paths. If you are interested in Digital Marketing, you can join our Career Accelerator Program (C.A.P). Click the link and join the course: https://www.premiumlearnings.com/digital-marketing-online-training-program?utm_source=linkcommenting&utm_medium=3boysandadogvijay

This is awesome idea to be implemented , I like it.

WOODENMOOD epitomizes the idea of bringing exceptional value with distinctive style furniture for your home. Reflecting designs that are Classic and Contemporary, WOODENMOOD delivers the right blend of aesthetics and functionality, as well as comfort and promised quality.