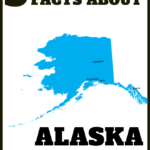 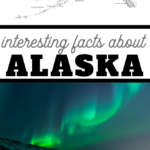 This beautiful state is wide open, cold most of the year, and filled with wildlife. Here are some interesting facts about Alaska that kids will love!

This is part of the 50 states unit study as we travel around America, learning about the history of each state. Check out these Alaska facts for kids below!

Alaska is the only state besides Hawaii that doesn’t touch any other states. It has the longest coastline of any other state in the United States, is the northernmost state, and is only 55 miles from Russia. It was bought from Russia in 1867 for two cents an acre, which was a steal! Its nickname is The Last Frontier and is the 48th most populated state in the U.S.

There are many interesting facts about Alaska including animals ranging from whales to wolves, active volcanoes, and a huge fishing industry. Since it’s close to the north pole, the winters are long and continuously dark while the summers are short and the sun shines almost all day long.

Fact One: The Iditarod Trail Sled Dog Race is run every year in Alaska.

This 15-day race covers 938 miles from Anchorage to Nome, Alaska. It’s competed with a team of 14 dogs and one musher (person) that stands on the sled and directs the dogs. This race is held in March every year starting in 1973 to commemorate a race against time to save the city of Nome from a diphtheria outbreak in 1925.

Here are some fun activities for kids:

Paint the beautiful northern lights of Alaska with this Northern Lights with Watercolors craft.

These fun Iditarod Activities for the Classroom are perfect for homeschoolers.

Get the kids involved with these Amazing Winter Science Experiments. Bring the Iditarod race to your home with these fun activities.

Fact Two: Alaska is home to the largest population of gray wolves in the United States.

Gray wolves can be found in the Great Lakes region, Northern Rockies, Pacific Northwest, and Alaska. 7,000 out of the 11,200 gray wolf population live in Alaska and they travel in packs of around seven wolves. Here are some activities to help you learn about this endangered species of wolves.

Create your own “Wolf Mask” in this fun and easy craft.

The Gray Wolf Family Activity Guide by National Geographic will help kids of all ages learn about these majestic animals.

Read this fun book to learn more about wolves: Bringing Back the Wolves: How a Predator Restored the Ecosystem

Take this Wolf Quiz to find out how much you really know about wolves. Learn how to be a Junior Wolf Biologist in this activity guide.

Fact Three: Humpback whales can be seen off the coast of Alaska part of the year.

Humpback whales are amazing creatures who live under the sea and have a lifespan of around 50 years. They weigh around 40 tons and are 48 to 62 feet long. These massive creatures are known for their “songs” which can be heard for miles under the water and can go on for hours at a time. This is their way of communicating with the other whales in their community.

Make your own Humpback whale with this Humpback Whale Toilet Paper Roll Craft.

This Hawaiian Islands Humpback Whale Activity Book is perfect for kids who want to learn more about these whales.

This kids book is perfect for young learners: Humpback Whale (Young Zoologist): A First Field Guide to the Singing Giant of the Ocean

Test your knowledge of Humpback whales with this fun trivia sheet. This Humpback Whale Word Search is a fun way to learn facts about these mammals.

Fact Four: Alaska has the biggest fishing industry in the United States.

There are over three million lakes and over 6,000 miles of coastline in Alaska which makes it one of the best places to fish. The fishing industry in Alaska produces about 60% of the nation’s commercial fish. Catches range from salmon, lobster, crab, cod, shrimp, and halibut along with many others.

Here are some fun facts about fishing in Alaska for kids:

Learn about the Life Cycle of a Fish for Kids with this worksheet.

These adorable Fish Crafts for Kids are a great way to spend the day learning about fish.

This Fishing Activity Book for Kids: 50 Creative Projects to Inspire Curious Anglers is a fun way for your kids to learn about fishing.

Learn about ocean animals with these Ocean Animals Memory Cards.

Fact Five: There are 130 active volcanoes in Alaska which is the most in the United States.

More than 50 volcanoes in Alaska have been active since 1760 which is more than any in the rest of North America. In 2021 three volcanoes were active and spewing steam and ash at the same time. Volcanoes are like vents that release pressure from the earth’s core.

Here are some awesome resources for kids on volcanoes.

Eat your way through this Ice Cream Volcano Experiment for kids!

Read all about volcanoes with the National Geographic Kids Everything Volcanoes and Earthquakes.

Make your own volcano with this Simple Science: How to Make a Volcano with Kids.

Color a volcano with this color-by-number coloring sheet.