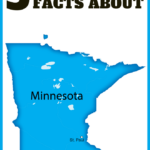 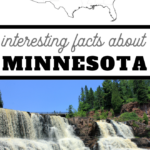 These interesting facts about Minnesota for kids include millions of turkeys and fish produced each year, Tonka Trucks, and the largest urban sculpture garden.

This is part of the 50 states unit study as we travel around America, learning about each state’s history. Check out these Minnesota facts for kids below! Find some fun crafts, activities, and books for each state that will engage kids of all ages.

Minnesota was formed by glaciers and has plains, low hills, lakes, forests, mountains, and rivers, and it borders Canada to the north. The capital is St. Paul and it became the 32nd state in the United States in 1858. It’s known as The North Star State and is filled with wildlife.

Fact One: 45 million turkeys are produced each year

In addition to producing turkeys for Thanksgiving dinner for the country, Minnesota also has over 70,000 wild turkeys roaming the state. If you go for a visit, you’ll most likely see some turkeys in the woods!

Minnesota is home to thousands of lakes that fish farmers use to harvest millions of pounds of fish each year. In addition, private fishers can also catch all kinds of fish to take home and eat. You’ll find largemouth bass, walleye, panfish, northern pike, trout, salmon, and so many more.

Fact Three: The Minneapolis Sculpture Garden is the largest urban sculpture garden in the US

This huge garden is home to 40 sculptures and is open year-round. It opened in 1988 and has been a popular tourist attraction since then. Some of the art is even interactive and are fun for kids and adults, alike.

Minnetonka began making toy metal trucks in 1955 and has been popular with kids ever since. Hasbro bought Tonka Trucks and kept the Tonka brand. These toys are now popular all over the world.

Fact Five: The first intercollegiate basketball was played in Minnesota in 1895

Hamline University in Saint Paul, Minnesota was where college basketball was first played in 1895. The game was played against the University of Minnesota’s School of Agriculture and the final score was 9 – 3.

Thank you for providing this helpful information. https://techinfoboost.com/

So that's why I very excited to learn more about Business Articles, Your Suggestions will be helpful for me.

I personally feel the usefulness of the article and will include in my blog commenting routine.