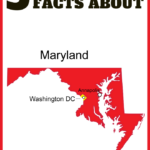 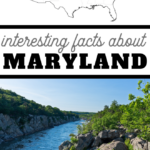 These interesting facts about Maryland for kids include the U.S. Navy, the first railroad, the first cathedral in the United States, and the National Anthem.

Maryland is on the eastern coast of the United States and is known as The Old Line State. It became a state in 1788 and was the 7th state to do so. The capital is Annapolis and is where Washington D.C. is located.

Fact One: The United States Naval Academy was founded in Annapolis

The USNA is located in Annapolis, Maryland, and was built in 1845. It educates students for officer service in the U.S. Navy and Marine Corps. The campus is 338 acres and is on the former grounds of Fort Stevens.

The first railroad station in Maryland was built in 1830 and was known as the Baltimore and Ohio Railroad Company. It was the oldest railroad company in the United States and serviced the eastern seaboard.

Fact Three: The Basilica of the National Shrine of the Assumption of the Blessed Virgin Mary

This basilica was the first cathedral built in the United States and was finished in 1863. It took 57 years to build and is now known as the Baltimore Basilica. It was built by Benjamin Henry Latrobe who was known as the “Father of American Architecture.”

Babe Ruth was born in Baltimore, Maryland in 1895. He was one of the greatest baseball players of all time and known as “The Bambino” and “The Sultan of Swat.” Many other famous baseball players were also born in Maryland, including Cal Ripken Jr, Billy Ripken, Lefty Grove, Frank (Home Run) Baker, Harold Baines, Al Kaline, Denny Neagle, and Jimmie Foxx.

This musical composition was written as a poem by Francis Scott Key in 1814 and was called “The Star-Spangled Banner.” After witnessing a battle in the War of 1812, he created this poem that became the United States National Anthem in 1931.