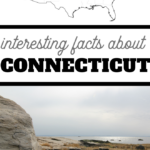 Though small, this state is full of history! Learn about it and other interesting facts about Connecticut in this article.

Connecticut was one of the first US states (it was the fifth!), which explains why it’s so rich with early American history. In the northeastern part of the United States, Connecticut is small, but has been home to Native Americans, Dutch settlers, and more before becoming a state.

Continue to travel along the United States with the full 50 states unit study.

Ever wonder where the name Connecticut came from? It came from the Native American word quinatucquet, which loosely means “beside the long tidal river.” Explore more about Connecticut’s history with these facts.

Did you know that Connecticut is rich in history with its animals and wildlife? Learn more about Connecticut and explore several different aspects of this diverse state.

Fact One: Connecticut’s state nickname is the Constitution State.

Connecticut has many different nicknames including the Nutmeg State, the Provisions State, and the Land of Steady Habits. But, its official nickname is the Constitution State!

Use these ideas to explore more about America’s constitution.

Build the American flag with bricks in this STEM inspired activity.

Learn about the constitution while making this George Washington inspired hat.

Connecticut is home to a variety of creatures in the wild, including some beautiful birds! The European robin is one of the most famous British birds. Even though they originated in Europe, every continent has their own type of robin.

Grab some construction paper for this cute robin craft.

Build a robin’s nest with this interactive STEM activity.

Grab these cards that detail a robin’s life cycle. Cut and glue them on a piece of paper to learn about the life cycle of a robin!

Robins! How They Grow Up is a beautiful picture book by Eileen Christelow.

With handprints and a paper plate, make this adorable robin!

One of the greatest entertainers in history, P.T. Barnum, was from Connecticut! P.T. Barnum was known for Barnum and Bailey’s Circus and for entertaining millions throughout his lifetime.

Step right up to these resources to help you learn more about Barnum.

Watch The Greatest Showman to learn more about his life. Then, analyze the facts and fiction.

Get the paint out to make a circus tent in this craft.

Grab the Who Was book Who was P.T. Barnum? to learn more about Barnum’s life and legacy.

Make circus slime out of laundry detergent! Kids are going to love this red and white slime.

The praying mantis is one of the most fascinating creatures. Its unique shape and design are what giving this creature its name. Out of the 2,000 species of mantids, just 18 live in North America!

Learn about the praying mantis with these activities:

Make your own praying mantis with this easy, step-by-step video craft.

Combine art and science with this mache version of a praying mantis.

If you’re feeling really adventurous, you can raise a praying mantis!

The American Revolutionary War was one of the most pivotal points in American history, as that is when it gained its freedom from the British.

Explore more about the American Revolutionary War with these ideas:

Ring in freedom with these patriotic wind chimes.

Learn about the significance of the liberty bell and try this liberty ball art project.

The Scarlet Stocking Spy by Trinka Noble is a wonderful picture set during the American Revolutionary War. It’s a longer picture book and works best with upper elementary students.

Books about Connecticut for Kids