These Books about Connecticut for Kids are sure to please and fascinate your children as they learn all about the state of Connecticut.

The following Connecticut-themed books for children cover all aspects of the home-school education coin – from picture books to workbooks; from learning to read up to chapter books! 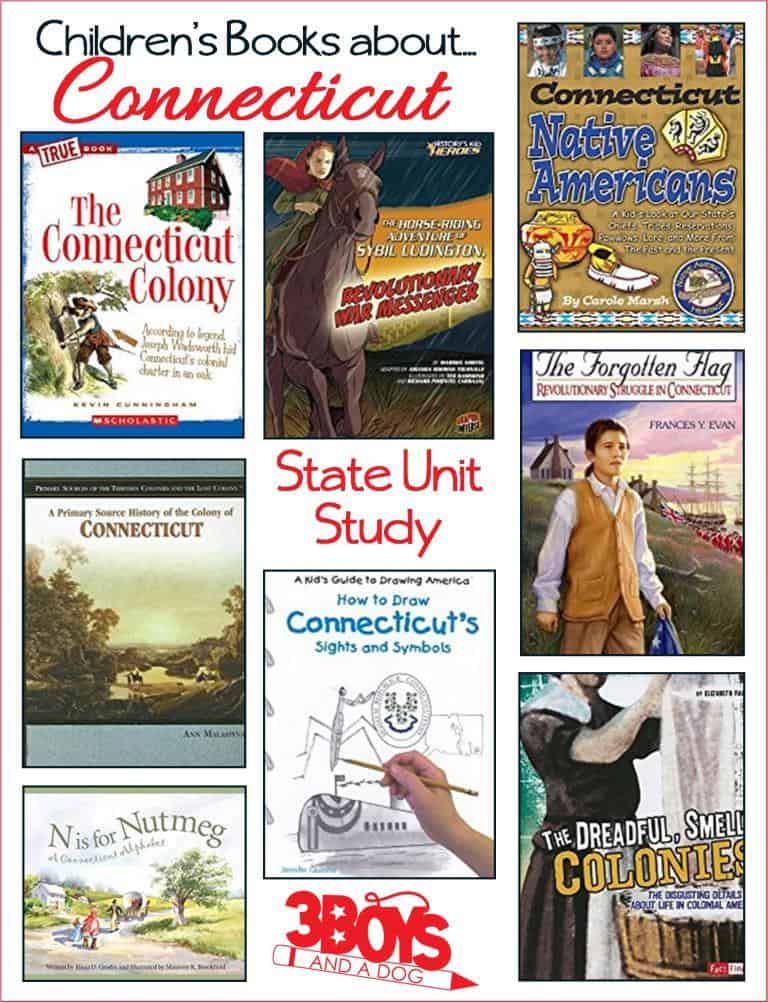 Books about Connecticut (for Kids):

This book tells about Ellen Elizabeth Barlow. Ellen, called Ellie, is a little girl who lives in Connecticut during the American Revolution. Ellie has many adventures. She goes to visit her grandmother and is able to deliver a message to the American Army.

Each Lucky to Live In book provides a new kind of Read Together/Do Together™ tool that parents and grandparents can use to spark the kinds of conversations their little ones enjoy and they, themselves, crave.

As one of the 13 original colonies, the state of Connecticut has played a pivotal role in our nation’s history — from its Revolutionary War figures such as Nathan Hale to its captains of industry and invention. N is for Nutmeg entertains as it informs readers on the history and geography, facts and folklore of Connecticut — learn why Groton is the submarine capital of the world and how Samuel Clemens got his pen name.

Connecticut People Projects: 30 Cool, Activities, Crafts, Experiments & More for Kids to Do to Learn About Your State (Connecticut Experience)

Connecticut traces its colonial history back to settlements in Hartford and Saybrook. Learn about early problems such as the Pequot War. Through primary source, take a look back at the Fundamental Orders establishing the government of Connecticut.

From moldy food and dirt covered clothes to poisonous pests and extreme weather, American colonists had a dreadful time in the New World. Get ready to explore the nasty side of life in the 13 American Colonies.

One of the most popular misconceptions about American Indians is that they are all the same-one homogenous group of people who look alike, speak the same language, and share the same customs and history. Nothing could be further from the truth!

The Wise Animal Handbook series shows familiar animals in humorous situations that give practical advice for life, while also introducing children to the important symbolic animals of their specific state with pull-out coloring pages

The Connecticut countryside, 1777. A messenger arrives at Sybil Ludington’s farm with bad news. British soldiers are starting to burn villages in the area. Someone must alert the colonial militia, and the messenger is too tired. Sybil volunteers to ride from farm to farm through the dark forest. Can she rouse the soldiers in time?

In 1964 two young girls make a mysterious discovery. An old, stained American flag is found stuffed into the rafters of a historic farmhouse. The story of the flag is revealed as the events of July 1779 in the small town of Fairfield, Connecticut, unfold.