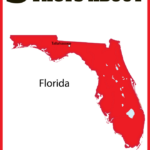 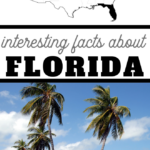 These interesting facts about Florida for kids include the only living barrier reef in the United States, Walt Disney World Resort in Orlando, and spaceship launches from Cape Canaveral.

This is part of the 50 states unit study as we travel around America, learning about the history of each state. Check out these Florida facts for kids below!

Find some fun crafts, activities, and books for each state that will engage kids of all ages.

Florida is a peninsula on the southeastern coast of the United States. Its filled with swamps,  beaches, woods, and jungle, and is hot and humid most of the year. The capital is Tallahassee and is the 3rd most populated state. It became a state in March of 1845 and Its known as The Sunshine State. It enjoys millions of travelers to its sandy shores each year.

Fact One: The only living coral barrier reef in the United States

Florida is home to the only living coral reef which is almost 350 miles long. It goes from the St. Lucie Inlet to the Dry Tortugas. Its the third-largest coral barrier reef in the world.

Here are some under the sea crafts and activities for your kids:

Walt Disney World Resort is in Orlando, Florida, and was built in 1971. Its spread out over 30,000 acres and sees more than 40 million visitors each year. Walt Disney himself never got to see the opening of the park.

Here are some fun crafts and activities about Disney that your kids will love:

The Saturn V was created for people to explore the moon. It was first launched on 11/9/1967 and was the most powerful rocket that has ever successfully flown into space. It was used to launch the Skylab space station in the 1970s.

Here are some fun rocket crafts and activities for your kids to try:

Fact Four: St. Augustine is the oldest city in the United States

St. Augustine was founded by Spanish settlers in 1565 and is the oldest city still standing in the United States. Its known as The Ancient City and is at the northeastern edge of Florida.

Here are some fun crafts and activities for your kids to explore the St. Augustine area:

Fact Five: Alligator Alley runs through the middle of Florida

In the Florida everglades, there is a road that runs from the top of the state all the way through the bottom. In the middle, its called Alligator Alley. This swamp/jungle is home to giant pythons, jaguars, alligators, and many other animals.

Here are some fun crafts and activities for your kids to learn about local animals:

Good Article! Useful for read and thanks for sharing. Adhiban Group is a leading Financial Services in Coimbatore, India which offers Loans without/less Documents for Corporate Companies & Entrepreneurs.