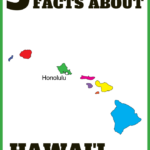 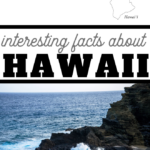 These interesting facts about Hawaii for kids include the best surfing, the only state made up of islands, and the largest pineapple plantation. Find some fun crafts, activities, and books for each state that will engage kids of all ages.

This is part of the 50 states unit study as we travel around America, learning about the history of each state. Check out these Hawaii facts for kids below!

The Hawaiian islands were made by volcanic eruptions thousands of years ago. They are covered in mountains, beaches, and waterfalls. The weather is hot and humid with a constant cooling breeze. It’s the 40th most populated state and the capital is Honolulu on the island of Oahu. It officially became a state in August of 1959 and is known as the Aloha State.

Fact One: Hawaii has some of the highest waves in the world for surfing.

Surfing is a major sport in Hawaii with the highest waves on the north shores in the winter months and the south shores in the summer months. The waves can reach between 30-50 feet. Surfing is an integral part of Hawaiian culture and was originally known as wave sliding.

Here are some fun crafts and activities about the ocean that your kids will love:

Fact Two: The only state that is made up entirely of islands

The islands were formed from volcanic eruptions and the state is made up of 8 main islands and many other smaller islands. It’s the only state that’s made up entirely of islands with no connection to a larger landmass.

Here are some fun crafts and activities about Hawaii for your kids to enjoy:

Fact Three: The largest plantation of pineapples is on Oahu, Hawaii

The largest plantation of pineapples is owned by Dole and offers tours, a Pineapple Maze Garden, the Pineapple Express Train, and the Plantation Center and Country Store. It sees over 1.2 million visitors every year and is second only to the Pearl Harbor monument in visitors.

Here are some fun pineapple crafts and activities that your kids will love:

Fact Four: Polynesians are native to the Hawaiian islands

Polynesia was ruled by kings and queens in a palace for 100 years. It was illegally ratified as a state in 1959 without the consent of the Queen of the Hawaiian Territories. Polynesian people have their own language, religion, and traditions.

Here are some fun Hawaiian crafts and activities for your kids:

Fact Five: The bombing at The Pearl Harbor naval base officially brought the United States into WWII

Pearl Harbor in Hawaii was attacked by Axis forces on December 7, 1941. The attack destroyed 20 American ships and more than 300 airplanes as well as hospitals, airfields, and the naval base. After the bombing, the United States officially entered the war with the Allies.

Here are some crafts and activities for your kids to learn about Pearl Harbor: