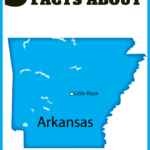 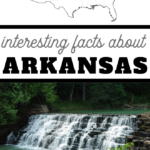 These interesting facts about Arkansas for kids include tourist attractions, the local industry, natural resources, and its Native American influences. Find some fun crafts, activities, and books for each state that will engage kids of all ages.

This is part of the 50 states unit study as we travel around America, learning about the history of each state. Check out these Arkansas facts for kids below!

Arkansas is in the southeast United States, covered by forests, and is bordered by six other states. The capital is Little Rock and it’s the 33rd most populated state. It became a state in June of 1836 and is known as The Land of Opportunity. Here are some fun and interesting facts about Arkansas that your kids will love.

Interesting Facts about Arkansas for kids

Arkansas is a fun state to visit. It was settled by three tribes of Native Americans thousands of years before settlers from Europe arrived. It has the only public diamond field in the world, is the largest producer of rice in the United States, and is the birthplace of former president Bill Clinton.

Fact One: Arkansas has the only public diamond field in the world.

The Crater of Diamonds State Park is the only place in the world where the public can search for and keep diamonds and precious gems. This park also has trails, a campground, picnic sites, and demonstrations. It’s the perfect place for a road trip for the family.

Learn How To Grow Your Own Crystal Egg Geode with this fun guide.

Have fun in the snow with this “Diamond Dig” – A Snowy Sensory Bin for kids.

This book, Gems for Kids: A Junior Scientist’s Guide to Mineral Crystals and Other Natural Treasures has lots of great info about gems including diamonds.

Want to know how to draw a diamond? Here’s an easy step-by-step tutorial.

Fact Two: Arkansas is the largest producer of rice in the United States.

Rice is Arkansas’ top agricultural export with over 9 billion pounds of rice harvested each year. The state produces more than 50% of the total rice in the United States. It has the perfect conditions for this crop to grow with wide, flat plains and controlled floods.

Learn How To Make Colored Rice for sensory bins with this fun craft.

Read this book for kids about growing rice called, Daddy’s Got Dirt.

Fact Three: Bill Clinton was born in Arkansas and was the governor before becoming president of the United States

Bill Clinton was the 42nd president of the United States but before that he was the governor and attorney general of Arkansas. He was known for signing the North American Free Trade Agreement (NAFTA) and the Violent Crime Control and Law Enforcement Act. He currently lives in New York.

Make this fun Duck for President craft with construction paper, scissors, and glue.

Read this fun, illustrated book, If I Ran For President by Catherine Stier.

These 4th of July Math Activities are perfect for learning math.

Get creative with these President’s Day photo props.

Make your own pottery with Native American designs with Pottery with Kids: Pueblo Pottery At Home.

Make your own Rainstick Instrument with this easy guide. Make a Model of a Wigwam from Paper with this interesting activity.

Fact Five: There are over 300 species of birds that live in Arkansas.

Are you a bird watcher? If so, then Arkansas is a great place to take out your binoculars and search for Northern Cardinals, Blue Jays, American Crows, Carolina Chickadees, Tufted Titmouses, Mourning Doves, and many more. Here are some awesome activities and crafts about birds for kids.

Make your own bird nest with Bird Play Dough with Printable Birds with this fun craft.

Try this fine motor skill activity with your preschooler in Baby Bird Eats the Worm.

Which birds are in your own backyard? Find out with this book: Backpack Explorer: Bird Watch: What Will You Find?

Learn how to make a birds nest without using glue or tape in this fun STEM activity. These colorful Paper Plate Birds are perfect to hang from the ceiling and create a mobile.