I know, I know!  Christmas is over, but if you’re anything like me, you want to squeeze a little more magic in before packing all the decorations up.  How about a Polar Express week?

Here’s a few ideas to get you started!

Grab the Memory Cards from this Preschool Pack at Living Life Intentionally.  We cut them out and cheapskate laminated them.

For more information on cheapskate laminating, check out the 5 Little Ducks post.

My oldest daycare kids are 3, so we only played with about 10 cards at a time.  The kids seemed to enjoy the game, but turn-taking was a totally foreign concept to them!  They kept wanting to flip over cards after their initial two flips.  Perhaps it would have been better to skip the memory concept and focus on matching instead! 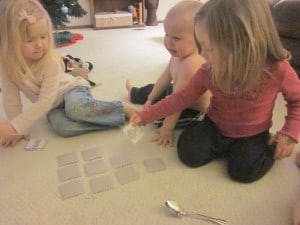 Place two memory cards on the floor.  Name one of the pictures and ask your child to pick up the card.  Watch your child’s eyes.  Praise them even if they look at the right card. That’s a step in the right direction!

This one was a huge hit with the kids and I couldn’t believe how quickly they picked up on names!

Print out one box car for every child.  Write names in the center. Color if you wish. 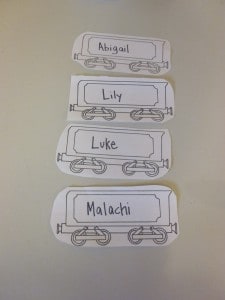 I barely colored around the outside and later the kids told me I should have colored the wheels too.  🙂  Your call!

Print off an engine and write “Name Train” on it. 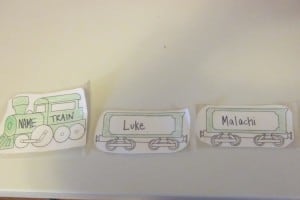 I covered the train cars in contact paper for durability.

There are a couple games we played with the Name Train.  Before begin playing games, hold up each name and say it out loud for your child a few times.  If there are similar names, you might want to point out a difference, such as “this name ends in ‘y'”.  Let’s Play!

Who’s Name is This?

Mix up all the cards and then hold up each one, one at a time, saying, “Who’s name is this?”  If your child struggles to answer, remind them of the starting letter and it’s sound.  After a few attempts, say the name for your child and then lay it on the ground or table.  Continue until you’ve done all the cars, including the engine. 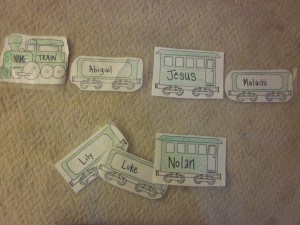 Point to the Name

Lay all the trains cars in a line.  Say, “All our friends want to ride the Name Train!  Who’s on the train?”

Then, ask “Where is ——-?” and have your child point to the appropriate name.  If they pick the wrong name, simply say, “No, that’s —— name.”  Remind them of the staring letter and sound and have them try again.

Continue until all the friends are named!

Have toddler arrange the boxcars in a straight line, putting the engine in front and a caboose in the back.

Lindsey Whitney is a blogger over at Growing Kids Ministry.  A blog designed to help parents, teachers, and Children’s Ministry workers who want to help the kids they love grow in their faith.   You can connect with her via twitter or on facebook.

Thanks for linking up to Homeschool FreeBEE Friday! Don't forget to link back to my post or share my button. Many blessings!

Fun ideas! Thanks for sharing. I'm always looking for activities to go along with books. :)