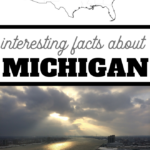 Up next on our journey around the United States is Michigan! Here are some of my favorite interesting facts about Michigan state.

After exploring Michigan, check out all of the other states with our 50 states unit study. Find lesson plans, crafts, and activities for each state.

Michigan was the 26th American state and is currently the tenth-largest in terms of size. The state is known for its automotive industry, diverse wildlife, and lakes.

Michigan is a northern state in the midwest. Despite its medium size, Michigan is home to over 10,000 lakes, including the Great Lakes.

Fact One: Michigan’s state nickname is the Wolverine state.

Despite its mitten shape (and the fact most ‘Michiganders’ use their hand to show which part of the shape they’re from), Michigan is known as the wolverine state. It’s a mystery why, since not many wolverines live there! The wolverine isn’t the state animal, but it’s also the mascot of the University of Michigan.

Wolverines are the largest member of the weasel family. Here are some ideas to help you learn about wolverines:

Use this free printable template to make your own wolverine craft.

Wolverines tend to prefer cold climates. Although they don’t hibernate, they do build dens! Try this engineering craft to build your own den, which you can adapt for wolverines.

Learn about wolverines with this National Geographic reader, Wolverines.

Ever heard the song Pop Goes the Weasel? Wolverines are the largest creature in the weasel family. Celebrate the quirky song with this pop-up weasel craft.

Fact Two: Michigan is home to the Great Lakes.

Michgian is known for its lakes. In fact, the word “Michigan” stems from a word meaning great or large lake.

The Great Lakes are Huron, Ontario, Superior, Michigan, and Erie, and they make up the largest group of freshwater lakes on Earth by total area.

Explore the Great Lakes with these ideas:

Learn about the water cycle with this bag STEM activity.

Mail by the Pail introduces the Great Lakes and their mail freighters to younger readers from the point of view of a young girl, Mary.

What’s the difference between oceans and lakes? Find out with this video from Generation Genius with extended materials.

Create an ocean and sand sensory bin and fill it with all things Great Lakes.

Learn more about butterflies with these activities:

Grab some different types of pasta to learn about the different life cycles of a butterfly.

The Very Hungry Caterpillar by Eric Carle is a classic children’s story about a caterpillar who transforms into a beautiful butterfly.

Create your own colorful monarch butterfly with this coffee filter craft.

Create a butterfly suncatcher with this simple and easy tutorial!

Sojourner Truth was an abolitionist who fought for civil rights and women’s rights in her lifetime. Although she was born a slave in New York, she later moved to Battle Creek, Michigan to start her new life.

Learn more about this incredible woman with these ideas:

Grab Who Was Sojourner Truth?, part of the Who Was series, for an introductory chapter book about her life.

So Tall Within is a vibrant picture book biography about Sojourner’s life.

Another famous abolitionist was Harriet Tubman. Create this lantern inspired by Tubman’s life and legacy.

Upper elementary students can try this triarama of Harriet Tubman.

Fact Five: The state mammal is the white-tailed deer.

White tailed deers are the smallest deers in the North American family. They live in a variety of places, including southern Canada.

Learn more about the white-tailed deer with these ideas:

Oh deer! Use a bowl for this deer craft.

Grab this free printable deer mask and use it to tell a white-tailed themed deer story!

Lost in the Woods is a photographic picture book about a newborn fawn. There’s not a lot of text in this book. Instead, the images do the talking.

Tell your own stories in the woods with these forest fairy tales.