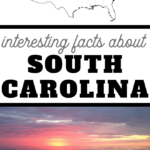 When building a homeschool curriculum for the United States, I could not wait to share Interesting Facts about South Carolina State. You may know about the fruit that this state is famous for but there were so many more interesting facts to this state. Sharing the amazing history of the state -you won’t want to miss all the fun things in this homeschool study unit-resource.

And if you’ve got big plans to do a whole lot of learning about the United States this school year, be sure to check out my 50 states unit study. You definitely don’t want to miss out on all the awesome resources I’ve pulled together and lesson plans for anyone who’s ready to learn!

Teaching and homeschooling my boys has opened up for where I can learn right along with them! Putting these resources together has been a blast. Helping them discover even more about all the states has been incredible and being able to share what I’ve found is even better.

And we’re all digging finding out more about our favorite states, like South Carolina!

South Carolina is one of those states that you think you already know everything about. But honestly, it’s more than just a good Southern state to take some time away to go to! (Plus South Carolinians are great people to meet!)

South Carolina has an abundance of things to be able to do and explore. There are amazing historical attractions and cultural places to enrich your mind. No one can forget the beaches and the attraction of Myrtle Beach as well for a fun getaway.

Did you also realize that one of our iconic historical figures came from South Carolina? The South has a lot of history to be uncovered so visiting museums is also a huge part of their culture.

It’s just been fascinating learning more about South Carolina State since it’s on our list of states to “dig-into” more this year. So, grab a slice of peach pie (South Carolina is famous for their peaches) and let’s start learning!

Fact One: The State Nickname is The Palmetto State

I had no idea that the nickname for South Carolina was The Palmetto State. This nickname comes from the state tree, the Sabal Palmetto. If you have never heard of the palmetto tree – this would be a great teaching moment for the kids!

The Palmetto is rooted in historical significance dating back to the Revolutionary War. On June 28, 1776, the British attacked Sullivan’s Island. The palmetto-log fort withstood British cannons until eventually the British retreated. The Sabal Palmetto was added to the flag of South Carolina, after it seceded from the Union in 1861.

This is such very cool history all stemming from just a simple tree that became a symbol for South Carolina in so many ways.

Make your own palm leaves with this paper craft.

The alphabet book Chicka Chicka, Boom Boom by Bill Martin Jr. is a classic that features a palm tree. Plus, it’s great for learning the alphabet. If they already know their letters, it’s still such a fun story.

Learn about South Carolina with P is for Palmetto by Carol Crane.

Fact Two: South Carolina is home to many animals. The Carolina Wren is the State Bird.

Learning about the Carolina Wren was so interesting because there are so many types of wrens. The Carolina Wren is unique because only the male sings loudly (not the female), in order to attract his mate. The couple will also remain together for life.

Learn more about the wildlife of South Carolina:

Make an interactive pop up bird with this craft idea.

The salamander is the state amphibian. Try to make this salamander craft.

Snakes, Salamanders, and Lizards by Diane Burns is a great introduction for all things snakes, salamanders, and lizards! Use it to explore more about these three creatures.

Fact Three: The Praying Mantis is the State Insect.

Maybe your kids really are not a fan of birds. Maybe they really are into insects! The Praying Mantis is such an awesome insect. They were fascinating to me as a child, so teaching the kids about them would bring back so many memories.

I had no idea that a praying mantis in the wild only had a lifespan of 12 months!

Another pretty interesting fact is that they lay 300 eggs at one time. Holy moly!

Definitely excited to dig into and learn more about South Carolina’s praying mantis.

Resources to help you learn more about the praying mantis:

Use this sensory bin to learn the life cycle of the praying mantis.

From the author of Corduroy, Manuelo, the Playing Mantis by Don Freeman is about a lonely praying mantis who creates community through music.

Learn how to draw a praying mantis with this simple, step-by-step tutorial.

What’s the life cycle of a praying mantis? Learn about it with this guide.

Andrew Jackson who was the 7th president of the United States hailed from South Carolina. He was alive from 1767-1845. Littler known about him was that he was a military governor of Florida, the commander of American forces at the Battle of New Orleans.

Even more awesome – Andrew Jackson was a founder of the Democratic Party. Taking this time to teach kids how the government was formed and was built hundreds of years ago is going to open their eyes to so much more.

Resources to help you learn more about Jackson:

The symbol of the Democratic party is the donkey. Make a paper bag donkey here!

Who Was Andrew Jackson? is a fun book to help kids learn about Jackson and the many roles in played throughout life.

Create a donkey with this printable craft.

Jackson is on the $20 bill. Study currency more and try this shiny penny experiment.

To practice learning about money, try this grocery store dramatic play. It can easily be adapted for older and younger students.

Fact Five: South Carolina is known for the peach!

The peach is the official state fruit of South Carolina. The peach became the official fruit in 1984. I know if you are like me you think a peach is a peach. But did you know that South Carolina grows over thirty varieties?! They have been growing them commercially since the 1860s.

This would be a great way to learn a ton of new recipes to include the peach because who knew that there were so many varieties. I sure didn’t!

Resources to help you learn more about peaches:

Inspired by James and the Giant Peach, try this giant peach craft!

On a warm summer day, you won’t need an ice cream maker to make this amazing peach sorbet. Plus, it only has three simple ingredients!

Get messy and use peaches for this art activity!

Create these story stones for James and the Giant Peach. Use them for the story or come up with your own to make a story about South Carolina!

Books about South Carolina for Kids

Top 10 Teen Friendly Things to do in Myrtle Beach