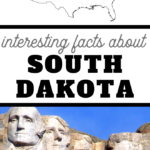 Travel along the midwestern states to South Dakota! South Dakota is less populated than some other states (it’s one of the least populated states in America), but has one of America’s most popular landmarks: Mt. Rushmore!

South Dakota’s history goes beyond this single landmark. Here are some interesting facts about South Dakota with activities to expand on each fact. After you’re finished, check out the 50 states unit study to travel around the rest of the United States.

From the Old West to Native America, South Dakota’s wildlife and geology have a lot of opportunities for science -, especially geology. Interestingly, some of its largest industries are mining, manufacturing, and agriculture – and tourism!.

Fact One: South Dakota is home to Mt. Rushmore.

Although not as populated as other states, South Dakota is on the map for one important historical monument: Mt. Rushmore! Its nickname is the “Mount Rushmore State.”

Learn more about Mt. Rushmore with these ideas:

Where is Mount Rushmore? What’s so great about it? Find out with this book!

Get out currency and make a mini Mt. Rushmore!

Learn about rocks, erosion, and the geology surrounding this famous monument from Mt. Rushmore’s official page.

Fact Two: The state bird is the ring-necked pheasant.

Ring-necked pheasants are large, chicken-like birds. They’re bigger than crows and the mails are known for their long, exorbitant tails.

Try these ideas to learn more about pheasants:

Grab a toilet paper roll for this pheasant craft.

Check out this detailed pheasant picture for coloring. You can get creative with your colors or stay realistic.

For kids who love bird watching, National Geographic’s Field Guide to the Birds of North America is a necessity.

Set in South Dakota, The Mystery of the Pheasants by Mark Meierhenry learn more about their family’s traditions and what pheasants mean to South Dakota.

Why are totem poles important to Native Americans? Learn more about totem poles with this craft and learning activity.

Welcome to Kaya’s World by American Girl is an excellent introduction to life for Native Americans.

Move to the rhythm with this DIY Native American drum!

Corn was important to Native Americans because of its versatility. Make your own simple cornmeal.

Named after “Pesach,” the Hebrew word for Passover, the pasqueflower flowers in the spring. Pesach is a Jewish holiday that celebrates the Israelites freedom from slavery in ancient Egypt, lead by Moses.

Learn more about Passover with these ideas:

If you’re feeling super craft, try to make these pasqueflowers out of tissue paper.

Celebrate Passover with this crossing the red sea craft.

What were the 10 plagues? Check them out with this free ten plagues activity.

Learn more about Passover with The Story of Passover by beloved children’s author David Adler.

Buffalos are some of the largest animals in North America. Because of their size, they need a lot of empty plains to roam!

These massive creatures can be 1,500-2,600 pounds and can be 8-9 feet tall! Previously, people used buffalos for everything from food, blankets, and shelters.

Resources to help you learn more about buffalos:

Learn more about buffalos from this buffalo craft from Crayola.

Gotta Go, Buffalo by Haily Meyers is a fun picture book full of unique goodbyes like “see you later, alligator.”

Make your own water buffalo with this fun craft.

Books about South Dakota for Kids