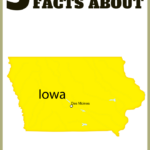 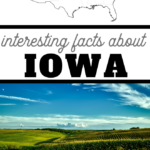 These interesting facts about Iowa for kids include the largest cave in the U.S., the Iowa State Fair, bicycling events, and the production of corn. Find some fun crafts, activities, and books for each state that will engage kids of all ages.

This is part of the 50 states unit study as we travel around America, learning about the history of each state. Check out these Iowa facts for kids below!

Iowa is in the central part of the United States and is covered in plains and farmland. The capital is Des Moines and it’s known as The Hawkeye State. It became a state in 1846 and is the 31st most populated state in the U.S.

Fact One: The Coldwater Cave is the largest in Iowa

This cave system is over 17 miles long and has one underwater entrance at the base of a 100-foot cliff. It was declared a National Natural Landmark in 1987 and is located in the Cold Water Creek Conservation area.

This fair is held every August and was started in October 1854. It’s located in Des Moines, Iowa on the Iowa State Fairgrounds. It spans 11 days and sees over one million visitors per year. It’s one of the largest fairs in the United States.

Fact Three: The longest and oldest bicycle racing event in the world is held annually in Iowa, called RAGBRAI

The Register’s Annual Great Bicycle Ride Across Iowa started in 1973. This huge recreational bicycle race that people come to race from all over the world every year.

Fact Four: Iowa is the largest corn producer in the United States

Iowa is one of the largest corn producers in the US with over 86,000 farms owned almost entirely by local landowners. It ranks first in producing corn at around 2.58 billion bushels every year. Most of this grain goes to feed livestock and the rest goes to food and product production.

Fact Five: Iowa is the highest producer of pigs in the United States

Iowa is the largest pig producer in the US with over one-third of them raised there. The pork industry contributed over $40 billion in sales in 2019 and creates over 147,000 jobs for local Iowans.