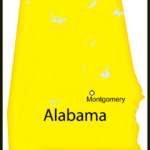 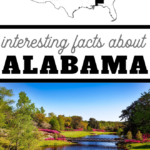 Don’t miss out on these Fun Facts about Alabama! The kids will love learning more about this great state found along the Gulf of Mexico. There are so many fun facts to learn about the 22nd state!

This is just one part of our 50 states unit study as we’re studying all the states in the United States. It’s so much fun to learn about the history and how it changes for every state. Check out the fun facts about Alabama state below!

Alabama is home to many people who helped change history. Rosa Parks, Helen Keller, and more came from the great state of Alabama. There are so many things to learn about the Civil War as well as the state constitution.

Many people think about the iron and steel industry when they think of this state, but there are so many other great Alabama facts to know.

Did you know that the state of Alabama became a state on December 14, 1819? Now the state has almost 5 million people making it the 24th most populated state in the US.

Fact One: Alabama does not have an official nickname!

There are many arguments about what the official nickname is, but the truth is Alabama doesn’t have one!

The most popular nicknames used are:

Why not combine some fun activities to help the kids have some hands-on learning, too?

Fact Two: The Labrador Retriever is the most popular dog in Alabama.

The most popular dog breed in Alabama is the Labrador Retriever, according to a list of America’s favorite breeds by The American Kennel Club. It beats out other favorites like the Bulldog and Beagle for its popularity with Alabamians who love their furry friends dearly!

Fact Three: The state’s official insect in the Monarch Butterfly

Most people know what the butterfly looks like but it’s always a good idea to get outside and take a look. This fun fact is great for getting the kids outdoors and seeing how many butterflies they can actually see. Just make certain that they don’t try to catch or touch them as this will harm the butterflies.

Fact Four: The first rocket to put humans on the Moon was built in Huntsville, Alabama

This rocket was named Apollo 11 and it made history. This happened in 1969. Also, Huntsville, AL is considered the rocket capital of the world.

Fact Five: Mardi Gras began in the USA in Alabama

Mobile, AL actually has the oldest Mardi Gras celebration in the US. They’ve been celebrating since 1702! The other fun fact is that Alabama hosted the first Mardi Gras parade as well which took place in 1830.