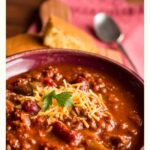 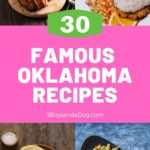 Famous Oklahoma Recipes include barbeque, fried onion burgers, chicken fried steak, fried pies, fried okra, and biscuits and gravy. These popular recipes will remind you of the best part of being in Oklahoma.

Don’t forget to check out this Oklahoma Unit Study as well to learn more about fun state facts and history.

These ten food categories include three recipes from notable professional chefs and home chefs, with the recipe testing and dish development done for you. All you need to do is enjoy the wonderful combinations that make these dishes uniquely Oklahoma.

Slow-cooked spare ribs coated in barbecue sauce are a favorite in Oklahoma. You can make them in the oven, crockpot, or smoker.

This famous Oklahoma recipe is made by mixing thinly sliced onions into the ground beef before making them into patties. When they’re cooked, the flavor of the onions is in every bite. They’re then topped with grilled onions, cheese, mustard, and, ketchup, and served on a hamburger bun.

Thinly sliced steak is coated in eggs and flour and then fried. It’s served as breakfast with eggs, hashbrowns, and bacon.

Hand-held pies fried and eaten for dessert are popular in Oklahoma. They are made by filling small circles of pie dough with a sweet filling like apples, blueberries, strawberries, or cherries, wrapping them up, and frying.

Chopped pieces of okra are tossed in eggs and then a flour mixture and deep-fried. They are a delicious appetizer.

Fluffy homemade biscuits are split in half and topped with a creamy sausage and thyme gravy and served for breakfast. They’re often eaten with a fried egg.

Skillet-made cornbread is crispy on the bottom and sides and soft in the middle. The best way to eat cornbread is to drizzle it with copious amounts of honey.

This famous Oklahoma recipe is served all over the state and is often found in competitions to see who is the chili-making champion.

Chicken breasts, thighs, wings, and legs are marinated in buttermilk, tossed in a flour and cornstarch mixture, and then deep-fried for golden perfection.

Fresh apple pie is a famous Oklahoma recipe. Sliced apples are tossed with cinnamon, lemon juice, and sugar, and laid in pie crust, and topped with another layer of dough. It’s baked until the apples are soft but not mushy and the top is golden brown.