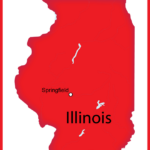 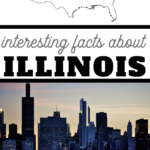 These interesting facts about Illinois for kids include the birth of Ronald Reagan, the beginning of Route 66, and being the largest coal producer in the United States. Find some fun crafts, activities, and books for each state that will engage kids of all ages.

This is part of the 50 states unit study as we travel around America, learning about the history of each state. Check out these Illinois facts for kids below!

Illinois is covered in plains and farmlands and is located in the northeastern part of the United States. It’s the 6th most populated state and is known as The Prairie State. It became a state in December of 1818 and the capital is Springfield.

Fact One: Ronald Reagan was born in Illinois

President Ronald Reagan was born in Tampico, Illinois in 1911. He was the 40th president of the United States after a career as a Hollywood actor and, later, Governor of California. Illinois is proud to be the birthplace of an acclaimed president and man.

Here are some fun crafts and activities about presidents for your kids:

Fact Two: Chicago, Illinois was the starting point of Route 66

Route 66 was opened in 1926 and went from Chicago, Illinois to Los Angeles, California. It ran over 2,448 miles and was the first international highway. Today, much of the original road is out of use since major highways were built to cut straight through the surrounding land.

Here are some fun crafts and activities that your kids will love:

Fact Three: Illinois is the third-largest producer of coal in the United States

Coal began being mined in Illinois in the 1800s. In 2019 the state produced 85.5 million tons of coal that are used to power the nation. Mining production has dropped in the last few years, however, it’s expected to increase over the next few years.

Here are some fun crafts and activities about coal that your kids will love:

The Lincoln Park Zoo is one of the oldest public zoos in the United States and it was founded in 1886. It’s located in Chicago on 35 acres of land. It’s one of the few zoos to offer free admission and sees over 3.6 million visitors every year.

Here are some fun crafts and activities to help your kids learn about animals:

Fact Five: Illinois was the first state to abolish slavery

Illinois ratified the 13th amendment in 1865  which officially ended slavery in the state. It was one of the few places African American people could live without fear of being enslaved immediately following the end of the civil war.

Here are some fun patriotic crafts and activities for your kids:

EDGE Watch2Earn Platform can instantly be added to any of the 860,000 video streaming sites and apps globally to increase revenue through increased ad consumption and by sharing content.