These West Virginia Books for Kids are sure to please and fascinate your children as they learn all about the state of West Virginia.

These books contain so much information about the long and varied History of this great State as well as stories about people from West Virginia.

The following West Virginia-themed books for kids cover all aspects of the home-school education coin – from picture books to workbooks; from learning to read up to chapter books! 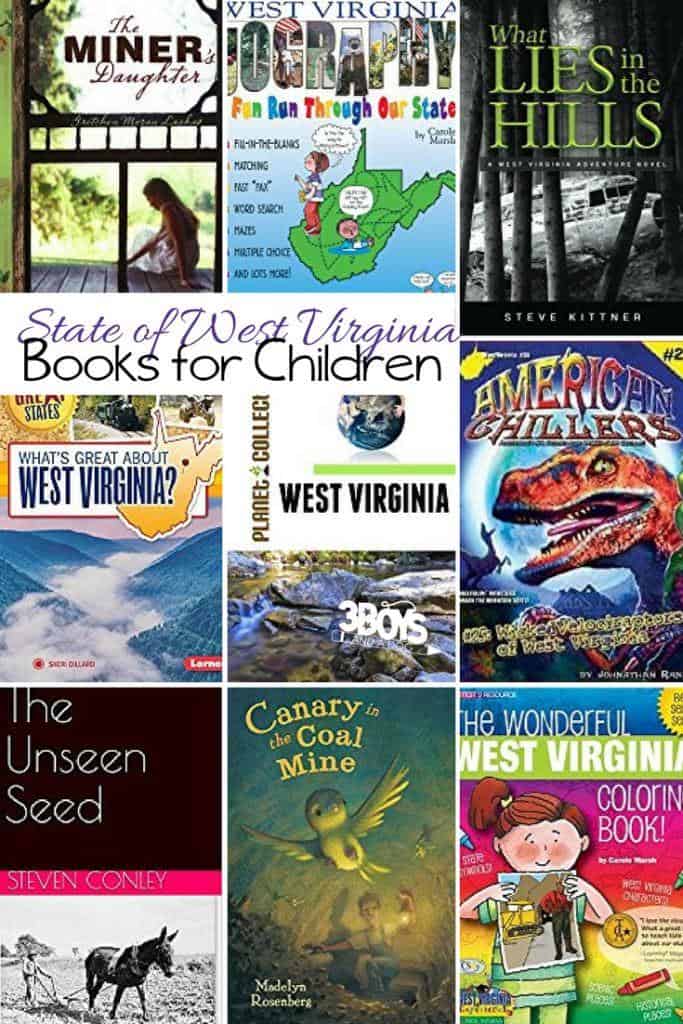 Two years have passed since the events portrayed in Mountain Girl. Elizabeth is now thirteen, and her troubled Uncle John has grown and changed. However, old emotions are stirred up when a young woman from John’s past re-enters his life. Can Elizabeth help her uncle rewrite his past, or will he shrink back into his shell?

With its multitude of mountains and the highest elevation east of the Rockies, it’s no wonder West Virginia’s nickname is the “Mountain State.” Abundant natural resources make it a leader in both industry and recreation, from glassmaking to rock climbing. Historic sites and sights include Harper’s Ferry and the annual Native American Pow Wow, along with Lost World Caverns and White Sulphur Springs. Noteworthy West Virginians include Chuck Yeager and Olympian Mary Lou Retton.

A collection of fifteen stories some well-known, some lesser known, and some brand new about West Virginia ghostly creatures. Beautifully illustrated with original paintings by Erin Turner, the stories are perfect for children s story time or a family campfire. Natives will recognize and enjoy tales of the state s most famous creatures and ghosts: the red-eyed Mothman, the green-cloaked Flatwoods Monster, and the unstoppable Greenbrier Ghost. Other stories focus on strange beings spotted the world over: aliens, the fabled Bigfoot, and UFO s.

It’s bedtime in the Mountain State! Say goodnight to all your favorite locations, including:

The reproducible coloring book includes pictures of characters, places, facts, and fun. The kids can color their way around your state while learning new facts. Great for school, home or on the road.

Growing up in West Virginia and growing a garden went hand in hand for many people. Take a step back in time and I will share with you one of my many favorite memories’s spending time with my Grandpa and his garden. Life lessons abound that can teach us about planting seeds of hope and peace while trusting God to send the rain and Son.

Once again, Josh Baker and Eddie Debord find themselves among the hills, hollows, and rivers of West Virginia in yet another fast paced adventure mystery! What started out as a quiet week of camping during a beautiful “Indian Summer” over Thanksgiving break—ends up as an inexplicable week of suspense, mystery, adventure, and intrigue.

Statistics say most kids know less geography than ever-don’t let that apply to your students! Start by making sure kids know the main places & geographic features in their own state. Give them activities that pretend they are taking a cross-state bike tour, using free football game passes, jogging through the state, etc., & they’ll find their way around in a hurry! Geography activities include info on counties, rivers, museums, historic places, sites of interest, colleges, bordering states, climate, topography, crops and more, all ready to reproduce!

One of the most popular misconceptions about American Indians is that they are all the same-one homogenous group of people who look alike, speak the same language, and share the same customs and history. Nothing could be further from the truth! This book gives kids an A-Z look at the Native Americans that shaped their state’s history. From tribe to tribe, there are large differences in clothing, housing, life-styles, and cultural practices.

As a part of the updated Planet Collection, “WEST VIRGINIA” offers facts, descriptions and thought inspiring questions alongside amazing photographs of West Virginia.

What’s so great about West Virginia? Find out the top ten sites to see or things to do in the Mountain State! We’ll explore West Virginia’s popular parks, spooky ghost tours, scenic mountains, and fascinating history. The West Virginia by Map feature shows where you’ll find all the places covered in the book.

The against all odds story of survival during the 1968 Hominy Falls, West Virginia coal mine disaster is told through the hand-written journal of trapped miner John Moore. His daughter Vicki tells of the nearly two weeks of waiting and wondering if they would ever see her father and his co-workers alive after the flooded mine cut them off from the outside and the world.

Exciting adventure tale! The Rain Forest Teddy Bears want to see snow more than anything. They smuggle themselves to the USA to Fairfax Elementary School in West Virginia. Find out if they get to help build that snowman they dream about!

The topics in this book include the contemptuous and divisive path of West Virginia Statehood, the 1960 West Virginia Presidential Primary that made the Kennedy Presidency possible, the invention of artificial limbs during the Civil War, the birth of the petrochemical industry, the coveted Golden Horseshoe, the early salt industry and technologies that made subterranean drilling possible, the early development and use of penicillin in the state, a glass industry survivor from state’s first natural gas boom, and the New Deal projects that were built in the state.

The United States of America is made up of many states and territories. The Discover America series uses exciting images and informative text to guide readers through the history, landscape, and identity of each U.S. state, territory, and district.

The Life of an Appalachian River is a journey along the span of the longest river inside the borders of West Virginia. Along the way we see how a couple of small streams combine to provide not only a home for forest animals but life along its banks and beyond. From its beginnings in the mountains of West Virginia we will travel 172 miles exploring the wildlife and uses the river provides for people along it journey.

Willa Laura Lowell is a 16-year-old miner’s daughter ushering in the Depression in a West Virginia coal miner’s camp. The days are long and hard, but worse when the mine shuts down. There is no money, forcing Willa’s father and older brother to look for work elsewhere. Left alone with her mother and three younger siblings, Willa helps as she can and dreams of a better life. Life changes dramatically for her and her family when they are offered a place in a new town. The teen never loses sight of where she came from and is determined to help others as she was helped. Richly drawn characters and plot make this an excellent novel that explores the struggles endured by many in America in the 1930s.

Bitty is a canary whose courage more than makes up for his diminutive size. Of course, as a miner bird who detects deadly gas leaks in a West Virginia coal mine during the Depression, he is used to facing danger. Tired of perilous working conditions, he escapes and hops a coal train to the state capital to seek help in improving the plights of miners and their canaries.