We are heading to Disney World in just a couple weeks!  What better way to get the kids even more excited and help them pass the time than by getting them a few Children’s Books About Disney World!  From interesting facts to really fun histories, these Disney World books are sure to keep your kids entertained! 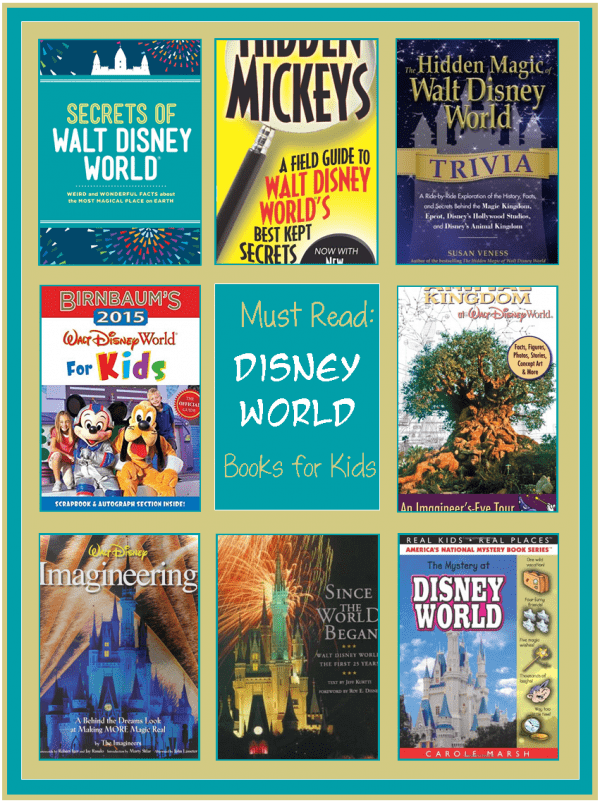 From stories to facts to coloring – these books will help you teach your kids everything there is to know about Disney World.

1.  Walt Disney World leaves kids of all ages wide-eyed and amazed, making it a favorite family destination. From Epcot to the Magic Kingdom to Hollywood Studios, it’s an enchanting place where imagination knows no bounds. Secrets of Walt Disney World uncovers the little extras and hidden facts that enhance your visit—and shows how Walt Disney’s incredible dream continues to inspire and entertain countless people every day.

2.  Barrett has searched Magic Kingdom’s New Fantasyland and all the rest of WDW to bring this guide to Disney World’s “hidden Mickeys” up to date with scores of new sightings of the cleverly camouflaged images. Disney’s designers have hidden them all around WDW―in the parks, shops, restaurants, and resort hotels―to delight visitors. Barrett offers a scavenger hunt for each of the four theme parks―Magic Kingdom, Epcot, Disney’s Hollywood Studios, and Disney’s Animal Kingdom―as well as one for the WDW resort hotels, and one for everything else―Downtown Disney, the WDW water parks, the golf courses, and so on. Scavenger hunt for hidden Mickeys by following the “clues” in each hunt. Or consult the “Index to Mickey’s Hiding Places” in the back of the book to look for Mickey wherever you find yourself, without following a scavenger hunt. This new sixth edition includes over 1,200 hidden Mickeys in all, with complete descriptions of each one in the “hints” sections of each scavenger hunt. Compete with family and friends to see who can find Mickey first. Or simply enjoy spotting these clever hidden images on your own.

3.   Full of Disney’s best-kept secrets and facts, you will spend hours racking your brain trying to figure out answers to questions such as, “What is the name of the award Walt Disney created for special Cast Members?” and “What is so special about the dentures Dr. Winch is promoting at Country Bear Jamboree?”

A treasure trove of challenging Disney World trivia, this book is guaranteed to stump even the biggest Mickey Mouse fan!

4.  Children are perhaps Walt Disney World’s biggest fans. On playgrounds and in classrooms, there’s always excited talk about who went to Walt Disney World and what they did each day-or minute. It has become almost a rite of passage to visit America’s most popular travel destination, and kids can be wonderful sources of information. Birnbaum’s Walt Disney World For Kids is tailor-made to engage youngsters and get them involved and excited about the vacation-planning process, and this year’s updated edition features a bold new look!

5.  The third in a series of pocket-sized paperbacks answers the question, “What would it be like to walk through Disney’s Animal Kingdom Park with an Imagineer by your side?” The Imagineering Field Guide to Disney’s Animal Kingdom provides that experience: pointing out details and telling stories, back stories, and Imagineering insights never before heard, condensed into a portable, easily-referenced park guide. You’ll never spend time at Walt Disney World the same way again.

6.  Contained within this deluxe tome are rough drawings, conceptual models, and behind-the-scenes stories showcasing Disney’s newest attractions and innovations from the inside out. There’s also an exclusive peek inside the Research and Development Lab to see what new magic will soon be appearing.

The Imagineers tell their own stories, as well as how they got there, what they do on a daily basis, what they show their friends in the parks, and how you can learn what it takes to become an Imagineer.

7.  In this fantastical thriller, five young teens tapped as models for theme park “guides” find themselves pitted against Disney villains and witches that threaten both the future of Walt Disney World and the stability of the world outside its walls. Using a cutting-edge technology called DHI–which stands for both Disney Host Interactive and Daylight Hologram Imaging–Finn Whitman, an Orlando teen, and four other kids are transformed into hologram projections that guide guests through the park. The new technology turns out, however, to have unexpected effects that are both thrilling and scary.

9.  What was supposed to be a vacation for four real kids at Walt Disney World turns into a wild ride as first one kid disappears, then another, and there’s only one left to solve the mystery! Renaissance Learning, Inc now has Accelerated Reader quizzes for all of the Carole Marsh Mysteries!

I hope you and your kids have fun learning about Disney World as you prepare for your vacation.  We have a 9.5 hour drive each direction when we go, so I am planning to put a couple on the Kindles. 🙂