These Books about Pennsylvania for Kids are sure to please and fascinate your children.  When teaching, you should always provide books the kids can read or look through themselves.  However, you should also have some books that you can read aloud to them.  The following cover all aspects of the homeschool education coin! 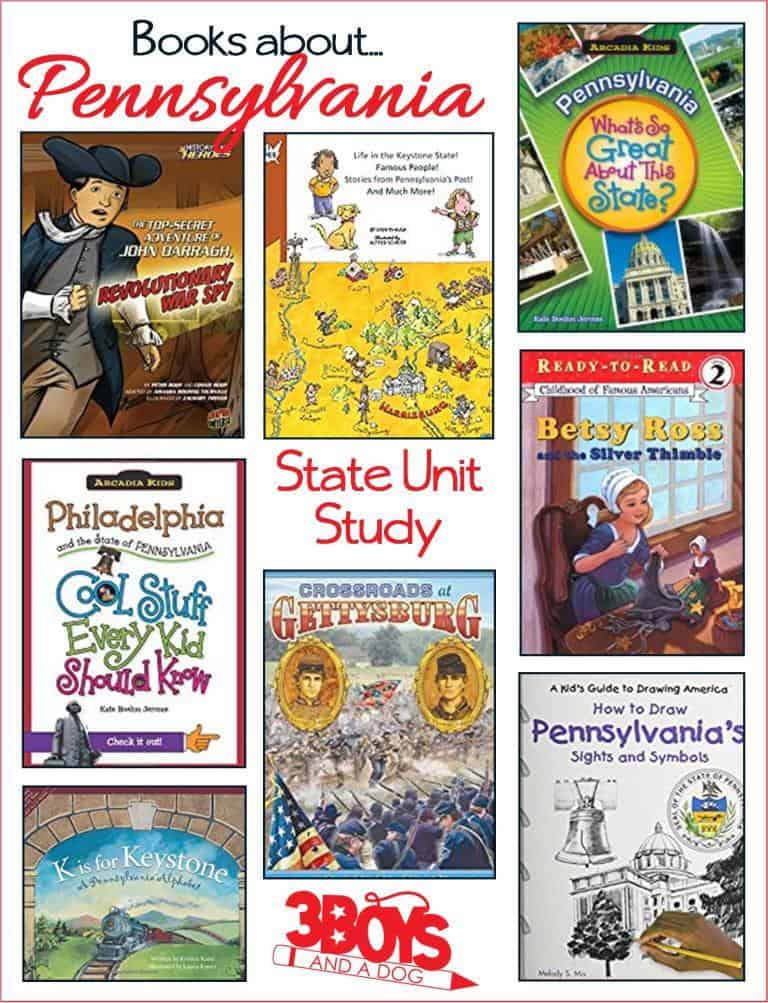 Books about Pennsylvania (for Kids):

The following books are all available at amazon.  Simply click the book image (aff link) to be taken there.

DO YOU KNOW… WHY Pennsylvania is known as the birthplace of the nation? (Hint: It has to do with ideas and ink!) WHAT famous place in Pennsylvania has more than 1,400 monuments and markers? (Hint: It honors both “sides.”) Find these answers and more in the Pennsylvania edition of What’s So Great About This State?

A new addition to Black Dog’s fun and fact-filled series with die-cut, state-shaped covers! Kids and adults alike will learn about the history, geography, and people of Pennsylvania in this charmingly illustrated exploration of a population-dense U.S. state.

Frank Lloyd Wright’s Falling Water, Gettysburg, Ben Franklin’s inventions, the Liberty Bell — there is so much to learn about Pennsylvania’s history and geography. K is for Keystone is a wonderful introduction to many of Pennsylvania’s unique features for readers young and old.

George and Gracie travel back in time to Hershey, Pennsylvania, in 1907. Their mission: To return an antique rug and rescue their parents. When the time machine lands them smack-dab in the middle of a barn, George turns into…something pretty weird.

Where in Pennsylvania was the First Continental Congress held? Who was William Penn? How did the Quakers come to get their name? Find the answers to these and many other questions in ‘Pennsylvania’, a book about one of the original thirteen colonies.

Betsy Ross wants to prove to her brother that she can do whatever he can — but she ends up proving something to herself instead.

It’s an alphabet book, travel guide and souvenir all in one, and it’s designed to be in the hands of the child, not the parent! This unique and colorful book uses photographs of various sites in Philadelphia, arranged from A-Z, to introduce the City of Brotherly Love to children of all ages.

A description of the Battle of Gettysburg as seen through the eyes of nineteen-year-old Confederate lieutenant John Dooley and seventeen-year-old Union soldier Thomas Galway.

The North and South finally meet! But how will Thomas react when George’s Confederates invade his home in Pennsylvania? Can Lynn’s brother Daniel and Thomas withstand the Confederate onslaught? Will George’s gallant charge across the field lead him right into the arms of his cousin Thomas?

Philadelphia, Pennsylvania, 1777. John Darragh’s family has sided with the rebel colonists during the Revolutionary War. But the family lives across the street from the headquarters of the British army, their enemies. The Darragh family spies on the British, and John takes messages to his brother in the rebel camp. Can John sneak past the British soldiers this time?

Philadelphia and the State of Pennsylvania:: Cool Stuff Every Kid Should Know

I LOVE these books for Teens that are based in Pennsylvania

Jorie King has been waiting for Benjamin Zook to return home to Lancaster County so they can marry. When news arrives that Ben has been killed, Jorie finds comfort in the friendship of his brother Caleb. That friendship ripens into love, and it seems that they are meant to be together. But when the unexpected happens, their worlds are turned upside down once more.

At the close of the 18th century, Philadelphia was the bustling capital of the United States, with Washington and Jefferson in residence. During the hot mosquito-infested summer of 1793, the dreaded yellow fever spread like wildfire, killing people overnight. Like specters from the Middle Ages, gravediggers drew carts through the streets crying “Bring out your dead!” The rich fled to the country, abandoning the city to looters, forsaken corpses, and frightened survivors.

These books are a great companion to my Pennsylvania State Unit Study!

The Pennsylvania State Unit Study is a perfect, week-long, study about The Keystone State!  You and your child will learn so many interesting facts, people, and events about Pennsylvania by completing the entire study that your children will beg for more and more information!  This is the perfect guide to Pennsylvania history for kids!