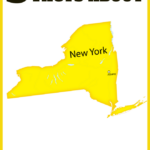 These interesting facts about New York for kids include dairy farms, subways, wild orchids, the world’s largest library, and the Statue of Liberty.

New York is in the northeastern part of the United States and is known for its cities, however, the geography is varied and includes farmland, rivers, forests, mountains, and lakes. The capital city is Albany and is nicknamed The Empire State. It became the 11th state in 1788 and now has a population of 19.84 million people.

Fact One: Dairy Farms are the biggest farming activity in New York

Over 18,000 cattle and calves are used in New York’s dairy farming industry. This is the biggest farming activity in New York and employs thousands of people.

The New York subway is one of the major transportation methods in the city. Over 1.7 billion people ride this underground train every year. If you’re ever in New York, be sure to experience it.

Orchids are incredible flowers that can live up to 100 years in the wild and between 20-25 years in a cultured garden. One interesting fact about New York is that it grows many different varieties of wild orchids which you can see in gardens and conservatories.

Fact Four:  The New York Public Library is one of the world’s largest libraries

New York is home to a huge collection of books, manuscripts, maps, and other items in the New York Public Library. It’s a must-see location on your trip to the state.

Fact Five: The Statue of Liberty is an icon of the United States

The Statue of Liberty was a gift from France in 1886. It is modeled after a Roman goddess and represents the seven oceans and the seven continents of the world. It’s one of the interesting facts about New York.