These New York State Books for Kids are sure to please and fascinate your children as they learn all about the state of New York.

These books contain so much information about the long and varied History of this great State as well as stories about people from New York.

The following New York-themed books for kids cover all aspects of the home-school education coin – from picture books to workbooks; from learning to read up to chapter books! 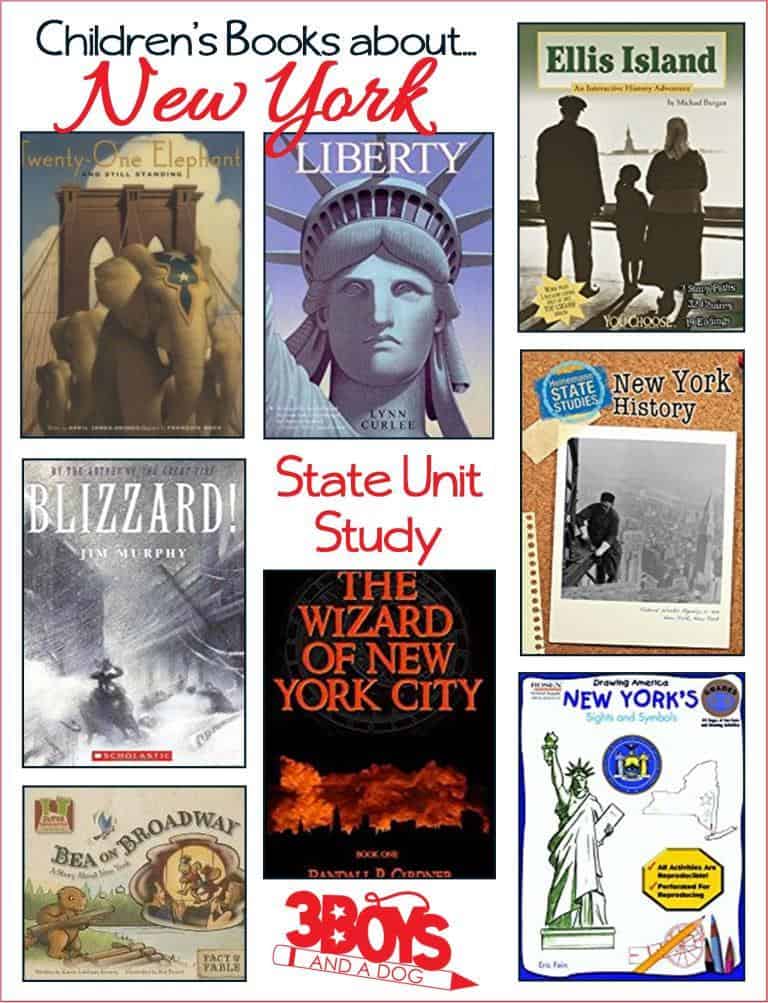 On their first school trip to New York City, the wolves rounded up the people. Then the trolls sealed off the edges of the island with stacks of crushed cars, and the goblins set about constructing a portal; a portal that would bring something horrible to this world…and all of this happened before the students had even left the American Museum of Natural History.

Start spreading the news! A 3D journey explores the Big Apple’s most exciting sites in this inviting novelty book.

Welcome to New York City! Open this engrossing, large-format book and set off on a tour that wends its way from the Statue of Liberty to Yankee Stadium, with many must-see stops along the way.

In the early ’60s, Robinson, a German illustrator, visited New York and documented his trip in his signature style, the self-described “X-ray view,” in which he depicts important buildings simultaneously from within and without (instead of showing exactly what was already visible in photographs).

Here’s a great introduction to Manhattan for young people. Illustrations of 25 Big Apple sites with great appeal to grade-school-age children depict the Statue of Liberty and Ellis Island, the ships at South Street Seaport, mummies at the Metropolitan Museum of Art, and dinosaurs at the American Museum of Natural History… plus, so much more!

In New York City, you can visit the green Statue of Liberty, hail a yellow taxi, and see blue lights in Times Square. Explore colors all over New York City in this gorgeous board book!

From A to Z, the city that never sleeps has something to offer everyone!

Come visit the American Museum of Natural History and see prehistoric Animals, get a Bird’s-eye view of the Brooklyn Bridge, and Check out Central Park in this alphabetical tour from bestselling duo Laura Krauss Melmed and Frané Lessac.

WHY the letter k starts and ends the word Kodak? (Hint: This letter had a real advantage!)

WHAT famous supermarket started out in 1916 as the Rochester Fruit & Vegetable Company? (Hint: It sells a lot more items today!)

This is the incredible story of the visionary engineer who built New York City’s first subway. The Secret Subway is the gripping tale of a man whose vision was years ahead of his time; a man whose dream was crushed by the greed and political jockeying for power that characterized the city in the days of Boss Tweed and Tammany Hall.

Follow the journey of the Statue of Liberty from 1865 to today as it goes from being a mere glimmer in the eyes of two Frenchmen to becoming a colossal gift to the United States, a gesture of friendship between the two nations, a monument to the first hundred years of American independence, and a symbol of liberty for all.

You’re one of millions of immigrants leaving your home in the early 1900s to move to the United States. You’re searching for a better life. Ellis Island, near New York City, is your first stop in your search for opportunity and freedom. Officials on the island have been processing immigrants there for decades, but not everyone gets through.

Provides a history of Grand Central Terminal from the mid-nineteenth century to the present, including its construction and architecture, the role played by Cornelius Vanderbilt, and facts about railroads in general.

This easy-to-use reference guide is divided into seven color-coded sections including state basic facts, geography, history, people, places, nature and miscellaneous information. This reference guide is perfect for students in grades 3 and up.

Details the Harlem Renaissance, the era in the 1920s and 1930s where this New York City neighborhood celebrated their African American identity through art, music, literature, and theater.

You Wouldn’t Want to Work on the Brooklyn Bridge!: An Enormous Project That Seemed Impossible

“Times Square: A New York State Number Book” teaches children about numbers, using state landmarks, historical events, and famous faces; from finger lakes to the stitches on a baseball, readers of all ages will know the number they represent and their ties to New York.

Describes the geography, plants and animals, history, economy, language, culture and people of the state of New York

Re-launch of the highly successful series The Thirteen Colonies. Four-color illustrations, photographs and the exciting history of New York.

This newly revised book presents a chronological history of the state’s major physical, social, and political growth and changes.

This newly revised book contains all kinds of interesting facts about the first people who lived in New York. You will learn about the different Native American tribes that have called New York home and the beliefs and practices that make them unique. And, you will find out where the tribes of New York are located today.

New York: Past and Present (United States: Past & Present

Snow began falling over New York City on March 12, 1888. All around town, people struggled along slippery streets and sidewalks — some seeking the warmth of their homes, some to get to work or to care for the less fortunate, and some to experience what they assumed would be the last little snowfall of one of the warmest winters on record. What no one realized was that in a very few hours, the wind and snow would bury the city in nearly 21 inches of snow and bring it to a ferocious standstill.

For more than a century, the Statue of Liberty has stood proudly in New York Harbor, welcoming people from near and far. Perfect for reading together with a young child, L Is for Liberty uses simple language and bold illustrations to celebrate the statue, her history, and the freedom she stands for.

One man seized the opportunity to show people in Brooklyn, New York and the world that the Brooklyn Bridge was in fact strong enough to hold even the heaviest of passengers. P. T. Barnum, creator of “The Greatest Show on Earth,” would present a show too big for the Big Top and too wondrous to forget.

New York State has many unique geographical qualities and resources that have helped make it a leader in business and industry. This fascinating book traces the history of the states industrial growth from its earliest colonial occupation by the Dutch to the development of factories and infrastructure that make New York the flourishing hub it is today. This helpful resource features primary source documents and maps from New Yorks history.

The birdwatchers of Central Park were buzzing–a young red-tailed hawk had been spotted, would he stay? The bird they dubbed Pale Male not only stayed, he became one of New York City’s most famous residents. Pale Male and his mate built their nest near the top of one of Fifth Avenue’s swankiest apartment buildings.

New York City boasts one of the most famous skylines in the world, and the Empire State Building is undeniably the focal point of this incredible view. At 102 stories, the structure was no small feat. In fact, its construction coincided with the onset of the Great Depression, and so progress was met with numerous setbacks.

A blind man and his dog struggling to escape from the burning North Tower, a company of firefighters risking their lives, an ordinary citizen turned rescue worker — each person endured a personal nightmare, and each carries a separate memory.

When Jackie Saved Grand Central: The True Story of Jacqueline Kennedy’s Fight for an American Icon

Dramatic and defining moments in American history come vividly the life in the Cornerstones of Freedom series.

These colorful, fact-filled books are irresistible! Die-cut in the shape of the state, each one takes readers on a fascinating journey to visit all the intriguing places, meet famous and historic figures, learn about animals and wildlife and experience the culture that makes each state unique.

A quick rhyme offers children facts about New York from A to Z. Alongside each rhyme, older readers gain a deeper understanding of the topic by reading the longer expository text.”We traveled New York from A to Z and there is still so much to do and see… We could round each letter twice again and still not reach the very end – Mountains, monuments, museums galore, There is still so much for us to explore, So much for us to celebrate In beautiful, bountiful New York State!

Meet Mr. Geo, everybody’s favorite geography teacher! He loves to explore new places. Today, he’s visiting New York, the Empire State. His first stop is Times Square on New Year’s Eve. He plans to climb to the top of the Statue of Liberty and watch a Broadway show, too. Then, he’s heading north to visit many historic landmarks and scenic wonders, including Niagara Falls.

Get the complete story of the Yankees, from Babe Ruth to Derek Jeter—with twenty-seven World Championships in between—in this “enormous home run” (Kirkus Reviews) of a middle grade adaptation of Pinstripe Empire, a celebrated keepsake for every baseball fan full of black and white photos from author and former Yankees PR director Marty Appe

With informative and fun activities, such as painting a Dutch fireplace tile or playing a game of stickball, this valuable resource includes a time line of significant events, a list of historic sites to visit or explore online, and web resources for further study, helping young learners gain a better understanding of the Big Apple’s culture, politics, and geography.

A history of New York colony, from its earliest Indian inhabitants, to the Dutch colony of New Amsterdam, the English takeover, and the lead-up to the Revolutionary War and its aftermath.

When Claudia initiates a citywide scavenger hunt to raise money for charity, it’s not just the twins’ opposing teams that run riot. With the whole school racing to trade in sights seen for points to score front row tickets at Madison Square Garden, they may not get to the finish line with their dignity-and social lives-intact!