Everyone has heard the story of Karen Kane, the bus monitor, being bullied and ridiculed by four seventh grade boys in Greece, NY. It was disgusting; horrible, violent and crude language hurled onto this 68 year-old grandmother who was doing her job. Karen didn’t reach out and grab the ring leader (although he looked quite small), nor did she call on her cell phone or taser him. (The school continues to say they are shocked and appalled by this behavior even though Karen has said it has happened in the past and was ignored.) The kids were impulsive, not thinking or caring about later consequences, and kept going with their taunts, knowing they were being filmed. Obviously, they were having fun, and probably came from homes where this behavior was acceptable.

The tape is so disturbing that although it lasts for ten minutes, few people can watch it for more than three. People around the world are identifying with Karen. They too know what it is like to be bullied by someone and unable to stop the bully. They identify with her being an adult and trying the tactic everyone has been taught to do with bullies, “ignore them and they will go away.” They don’t go away though, and instead the taunting got worse with her attempts to ignore them.

Everyone knows about bullying; we all know what it looks like, with recent documentaries of bully behavior, and kids being driven to suicide. There are many of us who are fed up with it, and we are sick of parents sticking their heads in the sand and ignoring what their kids are doing. Some (but not all) of the parents of these kids are single parents. It’s a lot more difficult to raise a child on your own, maintain a social life and possibly dating someone new. Obviously, something has to get squeezed out (we only have so much time), but what is being let go of is not okay. If you let go of being a responsible parent and raising responsible, respectful children who obey the law and are engaged with their family, you are letting your child down as well as all of society.  Some parents realize too late they never wanted to be parents, and they have no idea how to set rules, follow through with consequences, or discipline their child. Their goal is to keep their child supplied with video games and cash, so their kid will not interfere with their life. 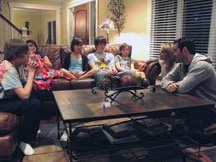 Kids need discipline (teaching); they need guidance and moral mentoring, including limit setting. They need an engaged father figure to help with this. They also need a mother who is there with her watchful eye and ability to correct their child when they make a mistake. It is important for both of these parents to be committed to raising their child through the teen years. A kid learns empathy, respect for authority, and respect for others at home. If the parents aren’t at home, have no respect for one another or their child, and don’t set examples of morality, empathy and respect, how in the world is their child going to value those characteristics?

The children who bullied this woman on the bus had deeper issues than their insults to her. They are mirroring happenings in their family. We need to look at the kids and the family and treat the whole system. The schools are in need of change, but they are a reactive institution. The bad stuff doesn’t begin with the school (although they are a great institution onto which to project blame); the bad stuff is in our homes.

Here are a few suggestions for parents who feel as though their child has taken over the home.

1. Begin by finding a parenting class. This is easiest done by finding a great parenting program. They are listed in many of the free family magazines being circulated within your city. There is a wonderful website also that would be a great place to begin. It is called: www.howtoparent.org. They list a series of blogs and can help you find parenting classes as well as find help for you and your child.

2. No matter if you are a single parent or a dual parent, you need to make home represent home again. You do this with your time. RE-establish a mealtime, cook a meal and be there.

3. Be engaged and go over your child’s virtual world. (If you are computer illiterate, hire a monitoring group to help.) Children live up to 80% of their waking hours in computer games, Skype, cell phones, Facebook, and anywhere else in the virtual world to which they can escape. Kids who are angry or depressed do not frequent positive websites, friends, or texts. You need to know what your child is doing.

4. Re-institute manners in the home. Talk with manners to them, and insist they address you politely. If you are angry and beating up others with your words or your fists, your kid is going to do the same thing (when you aren’t around). Bullies have seen bully behavior somewhere, and it is usually in the home.

5. Go back in your mind to the last time your family worked well together. A time when you spoke politely to one another and your children obeyed your rules without challenging you. If it has been longer than 2 months, you need professional intervention. Sometimes, beginning with a family meeting and talking about what’s
going on can be paramount in helping the family become stabilized and working together. A professional counselor can help empower and support family rules that mom and dad set, which gives the family back structure and helps support the family while new healthier ways of communicating are being learned.
If or when a child cannot be polite and respectful, before I look too deeply into their eyes, I am going to look into the parent’s. Kids are mirrors of the home. I have NEVER met a bully child without later meeting a bully, absent, or abusive parent. Take your kids back, give them a home, guidance and mentor respect for them.
Guest Article written by Mary Jo Rapini, MEd, LPC, who is a licensed psychotherapist and co-author with Janine J. Sherman, of Start Talking: A Girl’s Guide for You and Your Mom About Health, Sex or Whatever. Read more about the book at www.StartTalkingBook.com and more about Rapini at www.maryjorapini.com.

Kelly @ Eyes on the Source

Great tips, Kelli! It happens so often in stores, the library or other public places even when the parents are standing right there. I want to encourage parents, as you do, if you don't know what to do, get help! You and your children will benefit greatly!

Michelle @ On A Wing And A Prayer