Is your Child fascinated by History?  Do you wish he was?  This list of Books About the Roman Empire for Kids is sure to grow the love your child can have for History!  Personally, I find Ancient Rome extremely fascinating and love sharing it with my kids. 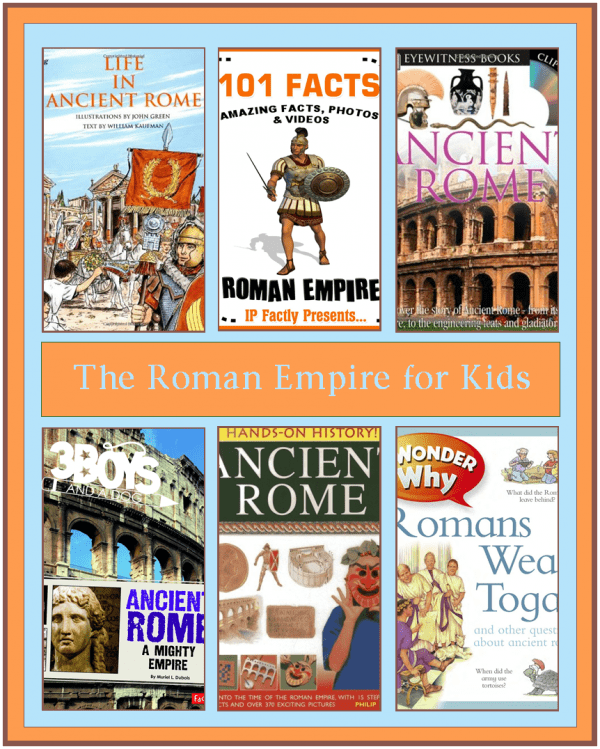 Books About the Roman Empire for Kids

From stories to facts to coloring – these books will help you teach your kids all about The Roman Empire!

1.  All the magnificence of ancient Rome, brought to life in 41 finely detailed illustrations depicting the defeat of Germanic invaders (c. 108 BC), the crushing of a slave revolt (71 BC), the assassination of Julius Caesar (44 BC) and more. Captions describe Roman cultural life, major landmarks, leaders and daily activities.

2.  This book provides fact after fact for children to tell family and friends, and even has an accompanying webpage with video clips giving a visual insight into Roman life.
The video links mean children come back again and again, naturally developing their reading and learning skills (early kindle models don’t support video but the safe website link is given).

3.  Full-color photos. “An excellent glossy catalog of entertaining information about a civilization of antiquity. Family life, household effects, cosmetics, sports, children’s dress and games–all these and more are on display in eye-filling spreads.

4.  Ancient Rome’s skilled army was its claim to fame. But a skilled army wasn’t the only thing that made Ancient Rome a superpower. Ancient Roman’s also made many advances in architecture and transportation. Explore what makes ancient Rome one of history’s greatest civilizations, from its republic government to its well organized, bustling cities.

5.  Travel back through the centuries to one of the greatest civilizations in history – the Roman Empire. Discover fascinating facts about the Roman way of life, the clothes people wore, the entertainments they enjoyed, and the food they liked to eat. Amazing projects allow you to construct a model Roman home, make a legionary’s uniform, and fashion a headdress that will leave you looking fit to rule an empire! Ideal for home or school use for ages 8 to 12.

6.  Browsers and young students alike will enjoy these lively question and answer books with their unique mix of realistic illustration and engaging cartoons. The enticing questions will amaze, amuse and inspire, while the highly visual format encourages kids to keep reading.

7.  Beginning with the founding of Rome, each chapter features important figures- including Julius Caesar, Augustus, and Hadrian to discuss the evolution of the republic, Greek influences, and rise of Christianity. Chapters on gladiatorial games, business, and class conflict balance out sections covering emperors, wars, and conquests. Numerous illustrations and full-color photographs of site, artifacts, and period artwork bring the time period to life for readers. The engaging and accessible writing, combined with sourced quotations make it a useful resource for research and discovery.

8.  The Roman Empire was one of the largest empires on history. Charged with controlling and protecting the empire’s territory and subjects, the Roman army was a massive, disciplined, and fearsome fighting force. From the rise of the Roman Empire until its decline and fall, its vast holdings were conquered, absorbed, and ultimately defended by legions of professional paid soldiers. At the height of their power, no tribe, no nation could stand in their way. This is their story.

I hope you and your kids have fun learning about the Roman Empire with this big list of books.