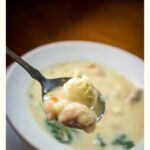 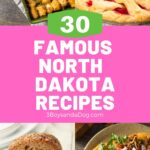 Check out our 50 states unit study for some fun states info! These popular recipes will remind you of the best part of being in North Dakota.

Don’t forget to check out this North Dakota Unit Study to learn more about fun state facts and history.

North Dakota borders Canada to the north and South Dakota to the south and sits on the Great Plains. The Native American and Scandinavian populations have influenced the food culture for the last hundred years.

These ten food categories include three recipes from notable professional chefs and home chefs, with the recipe testing and dish development done for you. All you need to do is enjoy the wonderful combinations that make these dishes uniquely North Dakota.

This ground beef casserole is filled with onions, peppers, carrots and topped with tater tots and shredded cheddar cheese.

Red and green apples sliced thin are tossed in cinnamon, sugar, ginger, and nutmeg and are laid neatly in a pie dish. It’s then topped with pie dough and baked until the apples are soft but not mushy, and the crust is golden brown.

This German dessert is made with fruit in a shortbread or yeast dough and drizzled with icing or fruit syrup.

This traditional Scandinavian dish is a potato bread similar to tortillas, and they’re topped with sweet ingredients like cinnamon, butter, and sugar.

When rhubarb and strawberries are in season, they combine to make a sweet and sour dessert with a crispy golden crust and is a famous North Dakota recipe.

Potato chips dipped halfway in melted chocolate are a sweet and salty snack that is a famous North Dakota recipe.

Jello salad is filled with fruit chunks, whipped cream, and topped with sliced fruit. It’s a tasty and light dessert that is popular all over the state.

No-knead artisan wheat bread is easy to make and healthy. Sprinkle seeds or nuts on top or mix them into the dough for a crunchy texture.

When you writes a post paragraph you make readers retains the image of your write up in our mind that is why we readers enjoy your content. Also, that’s why this post is amazing. Thanks

Thank you for sharing i was looking for something like this.

The store is operated through Prestashop, a shoe for children, wide jeans for a man, an Israeli website, sandals for women 2020, women's sandals, a dress for women, a shirt, a t-shirt, pumps, shoes. You can buy the latest clothes for women from vestido. Low price and excellent service

Fondhope is one of the well-renowned Indian dating site for married people that lets you meet your partner, who is looking out just for you. We provide you with a smooth online dating experience for all Indian men and women.

We have a wide range of list from which you can choose a partner to whom you may want to date on our married man and women dating platform. Our website is customized to give you a smooth search experience and you can find a partner easily from the comfort of your home. Here we have curated a list of dating partners that entertain you without any inconvenience.

We make sure our list of dating partners will meet your expectations and suit your desires well. We never miss a chance to make our customers happy. We stand among the top dating sites for married man in India that has oodles of options for you when it comes to dating someone.

We do provide you filter to find a perfect match for you. With us, you don’t have to wander anywhere to meet your dating partner, as we have perfect profiles to connect with.

Whatever you have in your mind, let us fulfill it immediately with our enticing dating profiles. Your individual needs are important to us.

You can directly browse for the partner you want. Don’t hesitate to get in touch with one, who is waiting for you. Directly start your conversations with the person, you want in life and make your life more meaningful. Now, sit relaxed and get ready to date your dream partner. https://fondhope.com/

White House White House: Government documents that President Donald J. Trump had accumulated were with him in roughly two dozen boxes in the White House residence. They were to go to the National Archives, but at least some ended up in Florida.

Four days before the end of the Trump presidency, a White House aide peered into the Oval Office and was startled, if not exactly surprised, to see all of the president’s photos still arrayed behind the Resolute Desk as if nothing had changed — guaranteeing the final hours would be a frantic dash mirroring the prior four years.