Albert Einstein was one of the greatest minds our world has ever seen, but people didn’t always think so!  These books about Albert Einstein for kids will help your child (and you) learn all about him, his early life, and the things he discovered! From cute stories to full biographies, there is something for every type of learner out there.  Have fun! 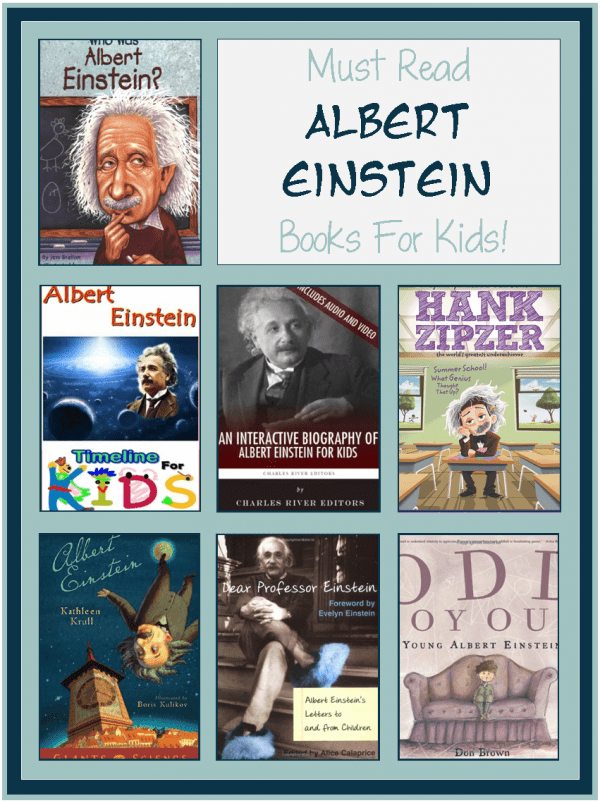 Books about Albert Einstein for Kids

From stories to facts – these books will help you teach your kids everything there is to know about Albert Einstein!

1. Everyone has heard of Albert Einstein-but what exactly did he do? How much do kids really know about Albert Einstein besides the funny hair and genius label? For instance, do they know that he was expelled from school as a kid? Finally, here’s the story of Albert Einstein’s life, told in a fun, engaging way that clearly explores the world he lived in and changed.

2.  Albert Einstein was a German-born theoretical physicist, best known for his Special and General Theory of Relativity and the concept of mass-energy equivalence expressed by the famous equation, E = mc2.
Albert Einstein Timeline For Kids is an excellent book for your child (A Beautifully Illustrated Children Picture Book; Perfect Bedtime Story).Kids will enjoy reading the stories aloud during family time!

3.  Perfect for ages 7-10
Includes videos and pictures of Einstein and important people and places in his life.
Includes a list of Einstein’s most colorful quotes and quotes about his life and views.
Includes a Bibliography for further reading.

4.  Summer school are two words in the English language that Hank Zipzer doesn’t want to learn. But there’s no getting out of this one for Hank-summer school, here he comes! Will Hank have to spend the summer bored to death inside a sweltering classroom, or will he actually learn a cool lesson or two?

5.  Albert Einstein. His name has become a synonym for genius. His wild case of bedhead and playful sense of humor made him a media superstar?the first, maybe only, scientist-celebrity. He wasn?t much for lab work; in fact he had a tendency to blow up experiments. What he liked to do was think, not in words but in ?thought pictures.? What was the result of all his thinking? Nothing less than the overturning of Newtonian physics. Once again, Kathleen Krull delivers a witty and astute look at one of the true ?Giants of Science? and the turbulent times in which he lived.

6.  This enchanting book displays a small sampling of the amusing, touching, and sometimes precocious letters sent to Albert Einstein by children from around the world, and his often witty and very considerate responses. Alice Calaprice has compiled a delightful and charming collection of more than 60 letters, most never published before, from children to perhaps the greatest scientist of all time. Enhancing this correspondence are numerous photographs showing Einstein amid children, wearing an Indian headdress, carrying a puppet of himself, donning furry slippers, among many other wonderful pictures. They reveal the intimate human side of the great public persona, a man who, though he spent his days contemplating the impersonal abstractions of mathematics and physics, was very fond of children and enjoyed being in their company.

7.  When he was born, Albert was a peculiar, fat baby with an unusually big and misshaped head. When he was older, he hit his sister, bothered his teachers, and didn’t have many friends. But in the midst of all of this, Albert was fascinated with solving puzzles and fixing scientific problems. The ideas Albert Einstein came up with during his childhood as an odd boy out were destined to change the way we know and understand the world around us . . .

8.  All children know who Albert Einstein grew up to be–but what was he like as a child? The clear text in this book is enhanced by illustrations and paintings, documents and photographs from the Smithsonian and the National Gallery.

9.  In addition to learning all about Einstein’s important contributions to science, from proving the existence and size of atoms and launching the field of quantum mechanics to creating models of the universe that led to the discovery of black holes and the big bang theory, young physicists will participate in activities and thought experiments to bring his theories and ideas to life. Such activities include using dominoes to model a nuclear chain reaction, replicating the expanding universe in a microwave oven, creating blue skies and red sunsets in a soda bottle, and calculating the speed of light using a melted chocolate bar. Suggestions for further study, a time line, and sidebars on the work of other physicists of the day make this an incredibly accessible resource for inquisitive children.

I hope you and your kids have fun learning about Albert Einstein!