Did your little ones like the list of Halloween Kids Movies we shared last week?  Well, your older children will probably really like these scary movies for kids as well!  Not too scary or gross, these are great movies to give those kids of yours enough adrenaline to make them have a great time this Halloween.  However, they but shouldn’t encourage nightmares. 🙂 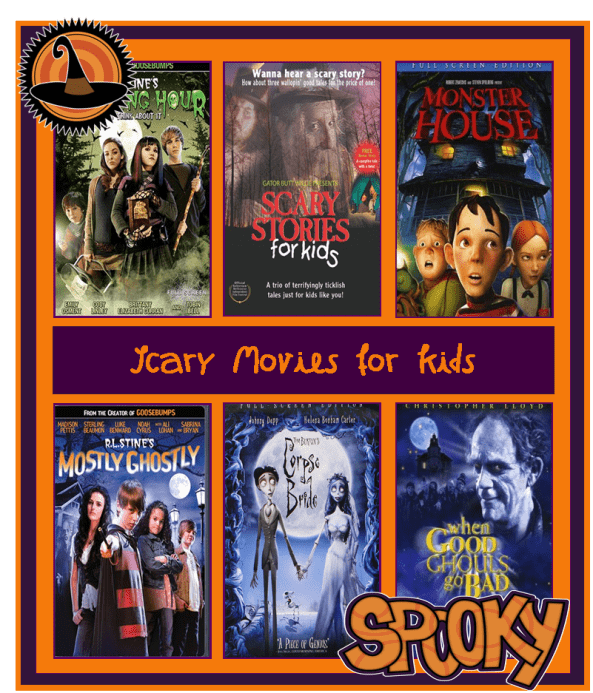 RL Stine’s The Haunting Hour: Don’t Think About It

– RATED PG – For 13-year-old goth girl Cassie, fitting into a new school and neighborhood isn’t easy, but she entertains herself by playing pranks on the “popular” kids and her little brother, Max. As Halloween approaches, Cassie’s search for scares leads her to a mysterious Halloween store and an unusual book called The Evil Thing. When Max begs her to read the book to him, Cassie finally gives in, ignoring the warning “Do Not Read Aloud.” But it’s when they get to the last page of the book and its clear warning about the Evil Thing – “Don’t Think About It” – that the spooky adventure really begins. Starring Emily Osment and Cody Linley of Hannah Montana, Brittany Elizabeth Curran of The Suite Life of Zack & Cody, and the quintessential movie villain, SAW’s Tobin Bell, R.L. Stine’s The Haunting Hour: Don’t Think About It is sure to put a shiver in your spine!

– NOT RATED – Gator Burt Willie carries on the tongue-in-cheek tradition of storytelling icon, The Cryptkeeper, only in G-rated family-friendly fashion. This program was created for kids under 11, and is jam-packed with the right amount of goose bumps and giggles

– RATED PG – Even for a 12-year old, D.J. Walters has a particularly overactive imagination. He is convinced that his haggard and crabby neighbor Horace Nebbercracker, who terrorizes all the neighborhood kids, is responsible for Mrs. Nebbercracker’s mysterious disappearance. Any toy that touches Nebbercracker’s property, promptly disappears, swallowed up by the cavernous house in which Horace lives. D.J. has seen it with his own eyes! But no one believes him, not even his best friend, Chowder. What everyone does not know is D.J. is not imagining things. Everything he’s seen is absolutely true and it’s about to get much worse than anything D.J could have imagined.

– RATED PG – Max is hardly a typical 11-year-old: he loves magic, detests sports, and can’t seem to say a single word to his crush, Traci, the most popular girl in school. But when he’s the only one who can see the ghosts haunting his house, two young spirits make him the deal of a lifetime: he’ll help them solve the mystery of their parents’ disappearance and battle a wicked ghoul, if they’ll help him go from being invisible to the most talked-about kid at school! Featuring an all-star cast including Madison Pettis (The Game Plan), Ali Lohan (TV’s Living Lohan), Luke Benward (How to Eat Fried Worms), Noah Cyrus (TV’s Hannah Montana) and Sterling Beaumon (Four Christmases), it’s one spooky mishap after another in this haunted adventure! Filled with thrills, chills and hilarious spills, R. L. Stine’s Mostly Ghostly will have the whole family on the edge of their seats!

– RATED PG – Tim Burton presents an animation of a young man who is whisked away to the underworld and wed to a mysterious Corpse Bride while his real bride waits in the land of the living.

– RATED PG – Twelve-year-old Danny Walker is shocked to learn that the small Minnesota town he just moved to can’t celebrate Halloween because of a local curse. With the help of his recently deceased (but still kicking) Uncle Fred, Danny must battle an army of prankster ghouls rising from the ground to break the curse once and for all – and bring back the magic of Halloween!

– RATED PG – You’re in for a devil of a time when three outlandishly wild witches — Bette Midler (BEACHES, BIG BUSINESS), Sarah Jessica Parker (HONEYMOON IN VEGAS), and Kathy Najimy (SISTER ACT) — return from 17th-century Salem after they’re accidentally conjured up by some unsuspecting pranksters! It’s a night full of zany fun and comic chaos once the tricky 300-year-old trio sets out to cast a spell on the town and reclaim their youth — but first they must get their act together and outwit three kids and a talking cat! Loaded with bewitching laughs, HOCUS POCUS is an outrageously wild comedy that’s sure to entertain everyone!

When I was a kid in middle school, I would spend the night with a very good friend of mine almost every weekend.  Every single time we would go to the movie place down the street and get Beaches, Flowers in the Attic, and Carrie.  Every single time!  Now, there is a new Carrie movie out – what is up with that?  Has anyone seen it?  Is it as good as the original?