Do your kids look forward to Monstober on Disney each year?  Mine do!  They love those kinds of movies and to be honest, I enjoy watching them, too!  This list of Halloween Kids Movies will keep you and your kids entertained all October long! 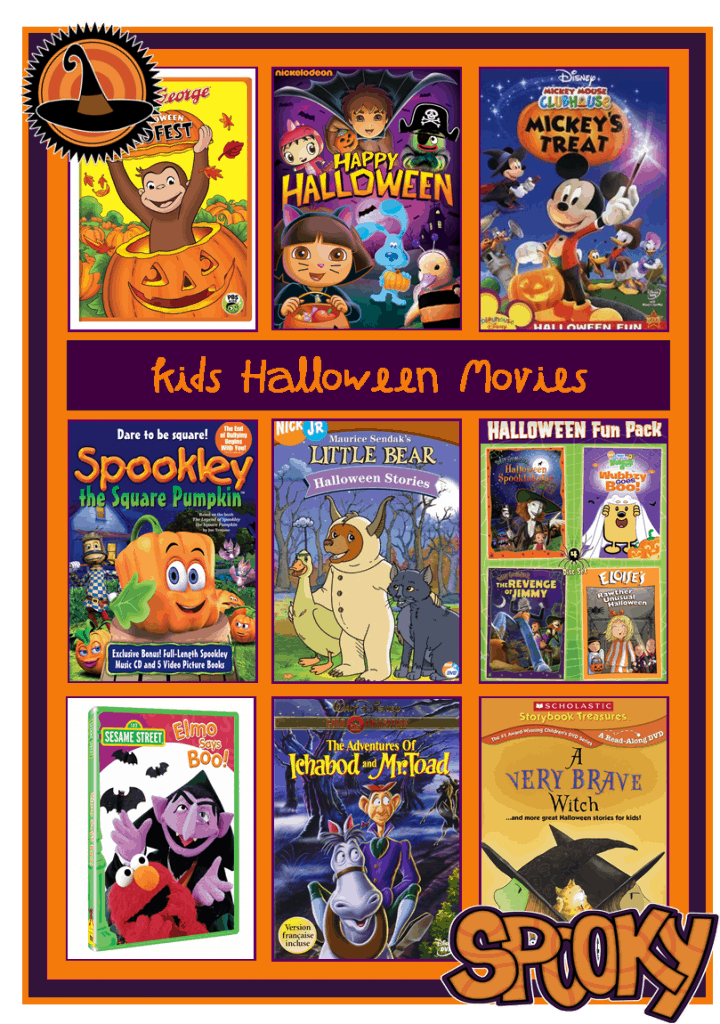 – Hang on to your hats and get ready for a spook-tacular good time, with Curious George — Autumn is here, bringing colorful leaves, hay rides, pumpkin patches, and the annual Boo Festival. After hearing about a legendary scarecrow who steals hats, the inquisitive monkey and his friends set out to find him. By the time he gets to the festival, George realizes that it’s not always easy to pick the perfect pumpkin, and that winning the prize for Best Costume may be as difficult as catching the mysterious Curious George: A Halloween Boo Fest — it’s a bewitching treat for the whole family!

– Join Marnie (Kimberly J. Brown) and her grandmother Aggie (Debbie Reynolds) as they stir up a cauldron full of comedy and adventure in two Disney Channel classics — HALLOWEENTOWN and HALLOWEENTOWN II: KALABAR’S REVENGE. On her 13th birthday, Marnie learns she’s a witch, discovers a secret portal and is transported to HALLOWEENTOWN — a magical place where ghosts and ghouls, witches and werewolves live apart from the human world. but she soon finds herself battling wicked warlocks, evil curses and endless surprises. HALLOWEENTOWN Double Feature will charm pixies, trolls and families everywhere every day of the year.

– Put on your costume, grab your goody bag and join Mickey and his pals for spooktacular Halloween fun. Mouskeready, mouskeset…here we go! Everyone’s invited to Big Pete’s Halloween party. But the gang needs to reach Trick-Or-Treat Tower before the moon is full, or the gates will lock and the party will be over before it even starts. Can they get through the foggy woods, past the Candy Corn Patch and over the drawbridge in time? With your help — and the right mousketools – they might make it! Join Mickey, Minnie, Goofy, Donald, Daisy and Pluto for three magical mouseketales that celebrate the power of teamwork, caring and sharing. Plus, as a special bonus treat, blast off with the Little Einsteins(TM) on a high-spirited Halloween adventure. Overflowing with music, laughter and nonstop fun for the whole family, MICKEY’S TREAT will make the Mickey Mouse Clubhouse your favorite haunt on Halloween or any time of the year!

– In a world where the only good pumpkins are round pumpkins, Spookley the Square Pumpkin is often teased by others because of his square shape. Soon Spookley is befriended by Edgar, Allan and Poe, three hilarious spiders who convince him that, square or not, he has a right to be the Pick of the Patch on Halloween. Could a square pumpkin really be the Pick of the Patch ? Not if mean round pumpkins Big Tom and Little Tom can help it. These two bullies tease and taunt Spookley because of his square roots.

– “Halloween” is the first and only Little Bear release in 2006. It will focus on Halloween/Fall elements found within the episodes. The DVD will include a main episode (which contain 4 mini episodes) and two bonus episodes (which contain 4 mini episodes each). Each episode is approximately 33 minutes in length for a total run time of 101 minutes. There is no VHS version for this title.

– Look who’s come to visit The Count’s spooky castle. It’s Elmo! Is he scared? Only for a second because soon he’s having a howling good time as his Sesame Street friends stir up some spirited fun. Get ready for nonstop jokes, songs and spooky surprises with Telly, Baby Bear, Bert and Ernie. Elmo Says Boo! is sure to make you shriek – with laughter.

– In the tradition of grand animated classics, Disney’s 11th animated masterpiece, THE ADVENTURES OF ICHABOD AND MR. TOAD, presents two unforgettable children’s classics. Through award-winning (Golden Globe, Best Cinematography, 1950) Disney animation wizardry, THE WIND IN THE WILLOWS and THE LEGEND OF SLEEPY HOLLOW come together in one fabulous adventure — in its original theatrical format. Hang on for a wild motorcar ride with J. Thaddeus Toad as he drives his friends Mole, Rat and Angus MacBadger into a worried frenzy! Then meet the spindly Ichabod Crane, who dreams of sweeping beautiful Katrina Van Tassel off her feet, despite opposition from town bully Brom Bones, who also has his eye on Katrina. The comic rivalry introduces Ichabod to the legend of the Headless Horseman, resulting in a heart-thumping climax! Wonderfully narrated by Basil Rathbone and Bing Crosby, THE ADVENTURES OF ICHABOD AND MR. TOAD brims with high-spirited adventure, brilliant animation and captivating music you’ll want to share with your family again and again.

– Halloween can be a dark and spooky time of year, but nowhere is it written that witches and ghosts have to be scary. “A Very Brave Witch” twists the common perception of witches to reveal that most witches are actually afraid of people, thanks to humans’ lack of green coloring, fear of flying, failure to cackle, and other perceived oddities. The brave little witch in this story is fascinated with humans and, after doing some research, decides to get a close-up look at some human children on Halloween night. What she discovers is a young human who’s just as brave as she is.