When choosing movies for your kids to watch (or own), how do you know which are good?  Well, in my experience, the Oscar Nominees are pretty stinking good movies.  So, start your 2015 library with some of these Oscar Nominee movies for kids! 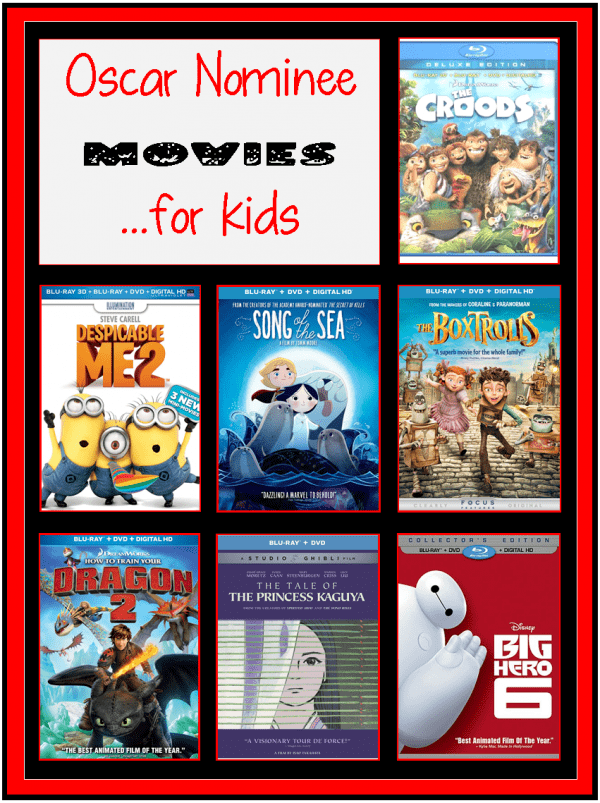 1.  The Croods - Join the first modern family as they embark on the journey of a lifetime across a spectacular and unforgettable landscape. When their cave is destroyed, everything the Croods have ever known is rocked by seismic shifts and generational clashes as they discover an incredible new world filled with fantastic creatures - and their world is changed forever. If they dont evolve, theyll be history!

2.  Despicable Me 2 - Three All-New Mini-Movies Starring the Minions-Introduced by Gru - Puppy - Panic in the Mailroom - Training Wheels The Making of the Mini-Movies-A fun-filled take on the making of the mini-movies through the eyes of the artists who made them.  Deleted Scene The Minions-A visit to Illumination Entertainment in Paris and Los Angeles to hear what its really like to work with the Minions. Evil Minions-Bigger, badder and more purple than ever, the newest and fiercest addition to the Minion species can chew through metal and swallow a car. Find out more about the process that led to their creation and design. A Gru-Some Transformation-A sit-down with Steve Carell as he discusses the transformation of Gru from the ultimate super-villain to super-dad and international spy.

3.  Song of the Sea - From the writer and director of the Academy Award-nominated The Secret of Kells comes an enchanting fable about loss, magic and the love of family. When Saoirse and Bens mother mysteriously disappears into the ocean, the two children go on an epic journey to find out the truth about her, and in the process, discover mystical secrets about both their mother and Saoirse herself. Featuring the voices of Brendan Gleeson (Braveheart) and Fionnula Flanagan (The Others), The Song of the Sea is a delightful piece of magical animation (Mark Adams, Screen International)!

4.  The Boxtrolls - From the creators of Coraline and ParaNorman comes a magical family adventure about heroes in all shapes and sizes: The Boxtrolls. Quirky, mischievous and good-hearted, these box-wearing creatures have lovingly raised a human boy named Eggs (voiced by Isaac Hempstead Wright) in a charming cavern below the bustling streets of Cheesebridge. But when evil Archibald Snatcher (voiced by Ben Kingsley) decides to capture the lovable misfits, its up to Eggs and his feisty young friend, Winnie (voiced by Elle Fanning,) to save the Boxtrolls.

5.  How to Train Your Dragon 2 - From the Academy Award nominated film How to Train Your Dragon comes the next chapter in the epic trilogy. When Hiccup and Toothless discover a secret ice cave filled with hundreds of wild dragons and a mysterious Dragon Rider, the two friends find themselves at the center of an epic battle to save the future of men and dragons!

6.  The Tale of Princess Kaguya - This animated tale is produced by Studio Ghibli, and directed and co-written by Isao Takahata, based on the folktale The Tale of the Bamboo Cutter. Found inside a shining stalk of bamboo by an old bamboo cutter and his wife, a tiny girl grows rapidly into an exquisite young lady. The mysterious young princess enthralls all who encounter her - but ultimately she must confront her fate, the punishment for her crime.

7.  BIG HERO 6 - With all the heart and humor audiences expect from Walt Disney Animation Studios, BIG HERO 6 is an action-packed comedy adventure that introduces Baymax, a lovable, personal companion robot, who forms a special bond with robotics prodigy Hiro Hamada. When a devastating turn of events catapults them into the midst of a dangerous plot unfolding in the streets of San Fransokyo, Hiro turns to Baymax and his diverse group of friends - adrenaline junky Go Go Tomago, neatnik Wasabi, chemistry whiz Honey Lemon and fanboy Fred - who transform into a band of unlikely heroes.

The above 7 Oscar Nominee Movies for Kids just not enough for your movie library?  Check out these other themed kids movies!

Movies about the Presidents (for Kids)