These 10 Christmas movies on Netflix for kids are sure to keep your kids entertained this holiday season.  Seriously, don’t feel bad about letting your children watch movies!  These all tell great stories and instill good virtues.

Are your kiddos gearing up for or already on winter break? Mine love to binge watch TV.  A few years ago, I shared my Top 10 Christmas Movies List (for Kids).

This year, I want to tell you about ones that you can find on Netflix. 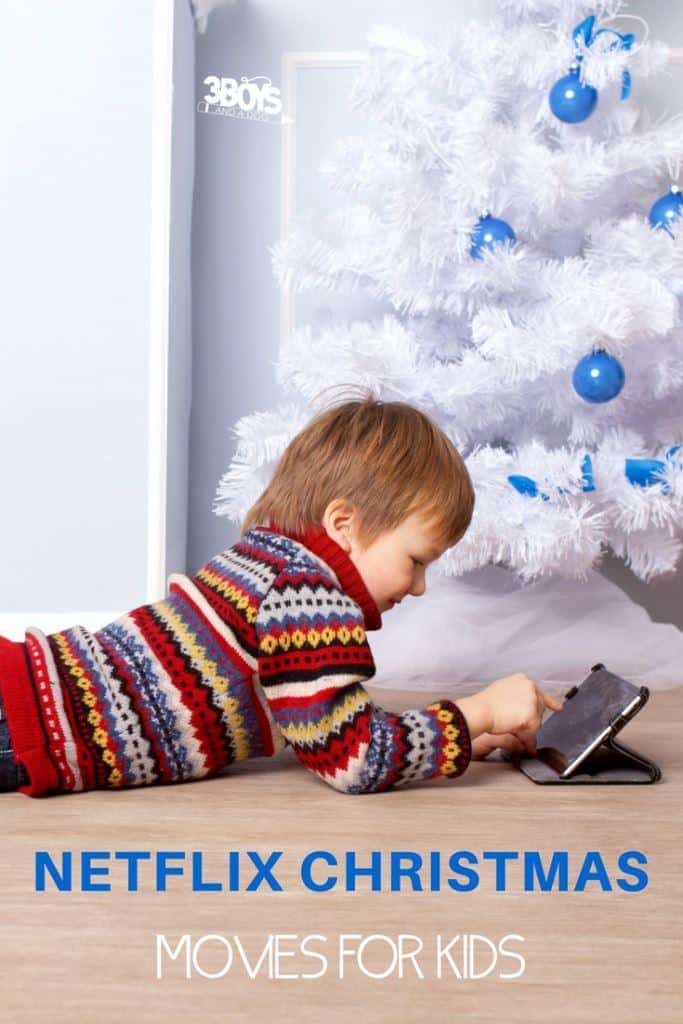 10 Christmas Movies on Netflix for Kids

1. How the Grinch Stole Christmas

– Discover the true meaning of the holiday season with the live-action adaptation of the beloved classic. Reimagine one of the most enduring holiday stories of all time. Why is the Grinch such a grouch? No one seems to know, until little Cindy Lou Who takes matters into her own hands and turns both Whoville and the Grinch’s world upside down, inside out… and funny side up. Filled with dazzling scenery, special effects, makeup, and costumes, this is an adventure “that can make your heart grow three sizes – if you’re not laughing too hard!” (Watch on Netflix)

2. White Christmas – After leaving the Army after W.W.II, Bob Wallace and Phil Davis team up to become a top song-and-dance act. Davis plays matchmaker and introduces Wallace to a pair of beautiful sisters (Betty and Judy) who also have a song-and-dance act. When Betty and Judy travel to a Vermont lodge to perform a Christmas show, Wallace and Davis follow, only to find their former commander, General Waverly, is the lodge owner. A series of romantic mix-ups ensue as the performers try to help the General. (Watch on Netflix)

4. Mickey’s Once Upon a Christmas – Disney’s biggest stars shine in a magical, heartwarming movie sure to become a holiday classic! Mickey, Minnie, and their famous friends Goofy, Donald, Daisy, and Pluto gather to reminisce about love, magic, and surprises in three wonder-filled stories of Christmas past. In the fine tradition of Disney’s superb storytelling, Minnie and Mickey recall the year they both gave up what was most important to them for the sake of the other, making for one unforgettable Christmas. Goofy and Max retell when they experienced a series of hilarious but season-shaking events … until a visit from the real Santa made it a most magical holiday. Thinking back to when they wished Christmas was every day, Donald’s nephews Huey, Dewey, and Louie remember their dream turning into a comical catastrophe, eventually teaching them what true holiday spirit is all about. (Watch on Netflix)

5. The Search for Santa Paws – This is a musical production that tells the story of how Santa and a young dog named Paws became best friends, and together forever changed the lives of a houseful of New York City orphans and a host of other New Yorkers. The film chronicles Paws’s desperate attempts to find Santa when they’re separated in New York City, the important roles both Santa and Paws play in spreading the Christmas spirit to children and adults alike, and the concern of Mrs. Claus and the elves over Santa and Paws’s longer-than-expected absence from the North Pole. (Watch on Netflix)

6. Mickey’s Magical Christmas: Snowed in at the House of Mouse  Starring Mickey Mouse and 35 of the world’s most beloved characters, this one-of-a-kind adventure joyously captures the spirit of Christmas and is sure to delight the entire family. (Watch on Netflix)

7. Santa Buddies – The buddies are off on a jolly new adventure when Puppy Paws, pup of the legendary Santa Paws, and his friends travel to the North Pole to save Christmas from disaster. (Watch on Netflix)

8. Nightmare Before Christmas – Can Christmas be saved? Bored with the same old scare-and-scream routine, Jack Skellington, the Pumpkin King of Halloween Town, longs to spread the joy of Christmas. But his merry mission puts Santa in jeopardy and creates a nightmare for good little boys and girls everywhere! (Watch on Netflix)

9. The Magic Snowflake – The new Santa is a seven-year-old boy. Will his first Christmas on the job be a success? This time it’s official: Nicolas is the new Santa — a big job for someone who’s only seven years old. Two days before his first big night, Nicolas has to handle a major crisis: the magic of Christmas seems to be disappearing around the world and it looks like it’s Nicolas’s fault. Indeed, thinking he needed to act like an adult to meet his new responsibilities, Nicolas contracted the illness of those who want to grow up too fast: Grown-up-allosis. The Council of Retired Santas is forced to relieve him of his duties and appoint an experienced Santa who will be able to manage the delivery in time. To get his job back, Nicolas must regain the innocence, freshness and carefree attitude of his childhood. (Watch on Netflix)

10. Cat in the Hat Knows a Lot About Christmas

– ‘Twas the day before Christmas and all through the yard the Cat in the Hat and his guests partied hard. When the party was over, and the guests all departed one poor baby reindeer was left broken-hearted! Can the Cat in the Hat, Sally, Nick and the Fish help make come true little Ralph’s Christmas wish? To be with his family, in far-off Freeze-Your-Knees. Will you help see him home? Come be our guests, please! (Watch on Netflix)

Do you watch these Christmas movies on Netflix for kids?  Do you have a favorite that I didn’t include?

This list is going to be a life saver for me during Winter Break! Thanks so much for sharing with us over at the Mommy Monday Blog Hop!

Great list. We were making our Christmas movie watch list over breakfast today. It is not on Netflix, but we really love Arthur's Christmas.