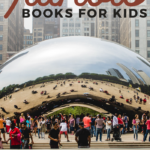 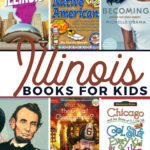 These Illinois Books for Kids will help your students really start to understand this great state. The books cover the basics, but there are also moving stories of children who live in Illinois!

Our picks let you teach about everything Illinois from geography and history to wildlife and more! I have so many great Reading: Book Recommendations for all Ages!

Have fun with these books about Illinois during your 50 states unit study!

It’s a well-known fact that the best way to get kids interested in reading is by having them read books they love. That’s why we’re recommending some great Illinois books for kids!

You and your children may enjoy the story or facts in these books, turning pages together to discover more about this state.

What is Illinois Known For?

The Land of Lincoln is the fifth most populous state in our country, but it’s also losing people. Population numbers have been on a steady decline, decreasing by more than 33% since 1970.

When most people think of Illinois, they think of Chicago – the 3rd largest city in the US. However, Illinois is actually almost 80% farmland! Yep, it is the top or one of the top producing states of Corn, Pumpkins, and Soybeans!

Why is Chicago, Illinois called The Windy City?

If you’ve ever been to Chicago, you know that Lake Michigan produces some crazy wind that funnels all through the city!

However, It is believed the term “The Windy City” came from an article in a newspaper describing long-winded politicians during an 1893 exhibition.

In the Chicago Tribune, the chief newspaper of Illinois at that time, was an article about how politicians were so full of themselves and their ideals, that they thought they could accomplish anything on Earth with a big speech and crowd support. 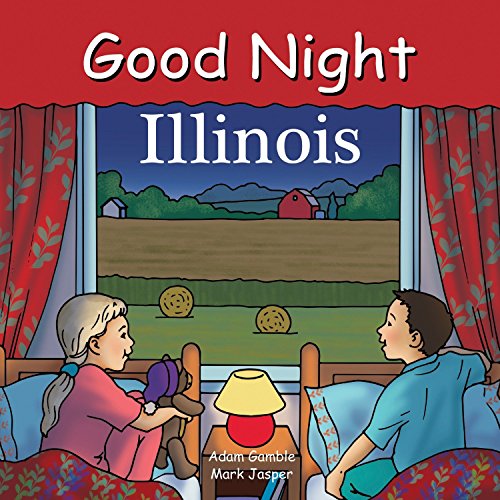 From the Abraham Lincoln Presidential Museum, to exploring all of Illinois' famous attractions and landmarks like Brookfield Zoo and John Hancock Observatory.

This board book allows children to explore all famous sights in the great state of IL through beautiful illustrations that will inspire a love for history from an early age! 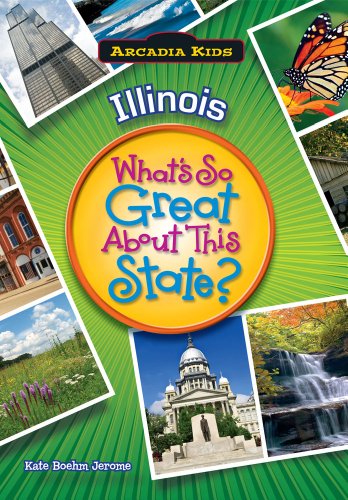 Illinois: What's So Great About This State (Arcadia Kids)

DO YOU KNOW...HOW the Fermilab honors the state's prairie heritage? (Hint: It has to do with what roams above ground--not below!)

WHAT meanders down the whole western border of the state? (Hint: It moves faster in a flood!)

Find these answers and more in the Illinois edition of What's So Great About This State? 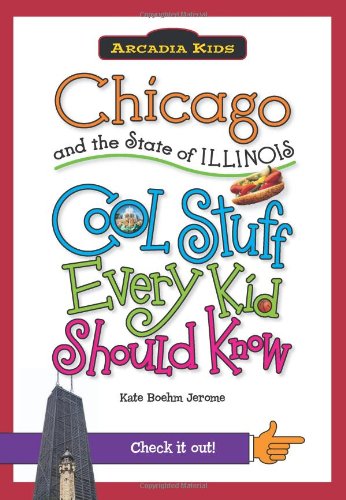 Chicago and the State of Illinois:: Cool Stuff Every Kid Should Know (Arcadia Kids)

DO YOU KNOW…What most people think a Chicago-style hot dog doesn't need? (Hint: Your taste buds may disagree!)

WHICH states are represented by the four pairs of bronze seahorses in Buckingham Fountain? (Hint: Think neighbors!)

Find these answers and more in Cool Stuff Every Kid Should Know™ -- an interesting little book about a very special place on the planet! 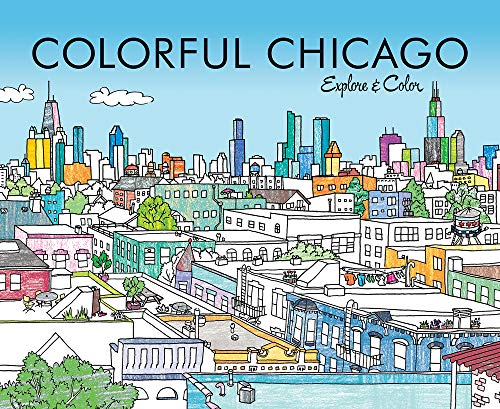 More than a coloring book, follow Colorful Chicago's map from the Garden of the Phoenix in Jackson Park to the Art Institute or biking on The 606, with many colorful stops in between.

The whimsical illustrations of this vibrant, Midwest city will delight the most adventurous artist. Creative & educational, at home or on the go. 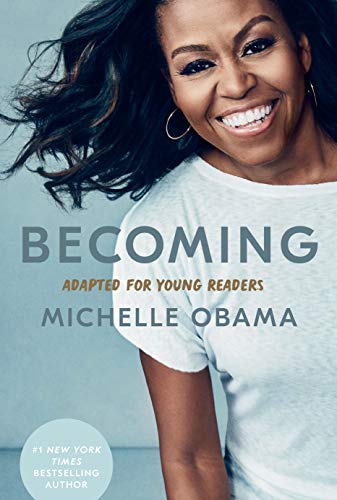 This volume for young people is an honest and fascinating account of Michelle Obama’s life.

She shares her views on how all young people can help themselves as well as help others, no matter their status in life. She asks readers to realize that no one is perfect and that the process of becoming is what matters, as finding yourself is ever-evolving.

In telling her, she asks young readers: Who are you, and what do you want to become? 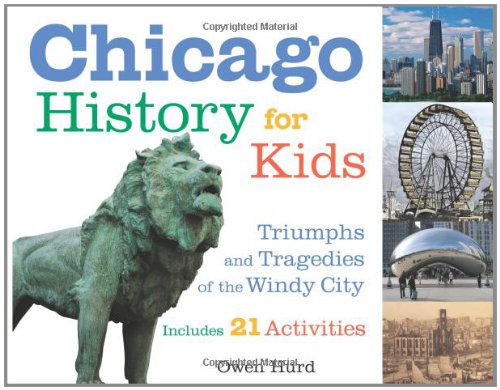 Chicago History for Kids: Triumphs and Tragedies of the Windy City (Includes 21 Activities)

Grade 4–9—This attractive overview begins with geography and moves to the colorful stories that characterize the city. Hurd tapped local experts and collections, using primary and secondary sources and the responses of young readers to craft this engaging resource.

Beginning with the Ice Age, a timeline opens each chapter. 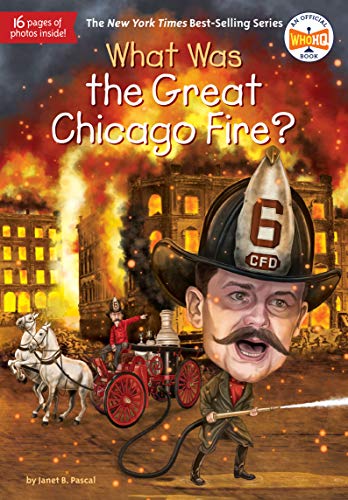 What Was the Great Chicago Fire? (What Was?)

In 1871, Chicago was a rich and thriving city. Soon it might even pass New York as the most important city in the United States.

Chicago leaders knew that fire was one of the main risks to a large city. So they had planned ahead. They had a top firefighting force with modern equipment. No matter how big fire was, they were sure they could stop it.

Sadly, they were wrong.

On a hot, windy October night, a fire broke out in the barn of a woman named Catherine O’Leary.

The fire spread and spread for thirty hours. It jumped over two rivers. Nothing seemed to slow it down. By the time it was finally put out, most of the city was destroyed.

Thousands of people, rich and poor, had lost everything.

One of the few houses that were left standing belonged to Catherine O’Leary. She and her family also survived the fire. But her cows did not. Did one of them really cause all this destruction? 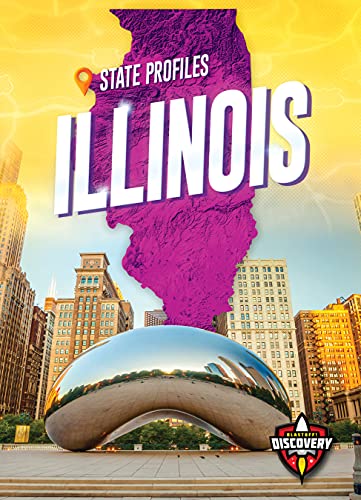 From the sandstone canyons of Starved Rock State Park to the famous horseshoe sandwich in Springfield, there is much to explore in Illinois beyond Chicago's busy streets!

This informative title takes readers across the Prairie State to explore its landscape, history, people, wildlife, and more!

Features profile a famous Illinoisan, introduce a native animal, map out important cities and landforms, and highlight inventions from the state.

Find out all that Illinois has to offer with this engaging read! 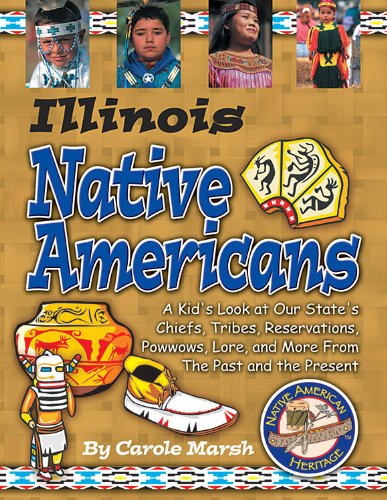 This book gives kids an A-Z look at the Native Americans that shaped their state's history.

From tribe to tribe, there are large differences in clothing, housing, lifestyles, and cultural practices. 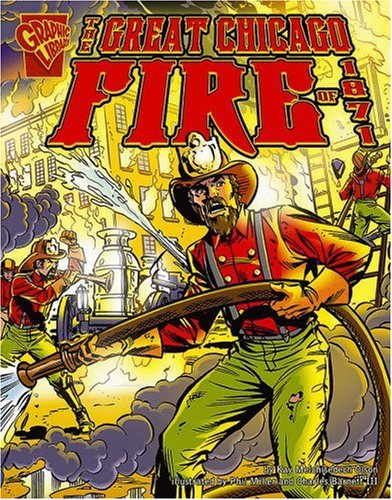 The Great Chicago Fire of 1871 (Disasters in History)

Discover the story of the Great Chicago Fire of 1871, an inferno that forever changed the city's skyline, in this epic graphic novel!

With extensive back matter, including a bibliography, extended reading list, glossary, and further Internet sources, young readers will gobble up this action-packed comic book about one of history's most compelling disasters. 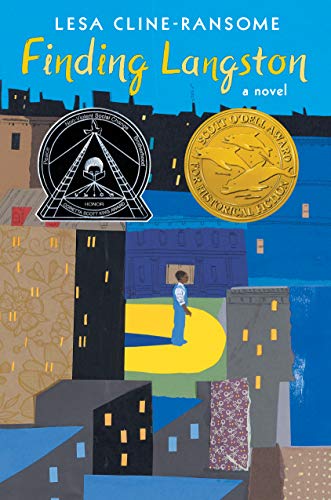 In Lesa Cline-Ransome's lyrical novel, a young boy from Alabama struggles to make sense of his mother's death and their relocation to Chicago.

Langston is forced to grapple with the all too real challenges of living in 1920s America: racism, loneliness, puberty - even an unfortunate haircut that earns him cruel teasing at school.

He finds solace in books; once he discovers the public library right around next door -- which has opened its doors during a time when other parts of society were segregated by race - it exposes Langston to a whole new world filled with poetry especially works written by African American literary greats!

Winner of the Scott O'Dell Award for Historical Fiction 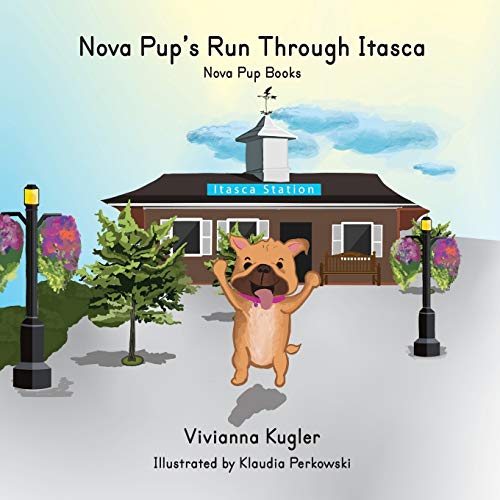 Nova Pup and her dad go on a run through the town of Itasca, Illinois.

With the promise of a puppuccino at the end, Nova Pup excitedly passes by Itasca businesses, parks and local sites.

When they encounter an unexpected rainstorm, Nova Pup must find a way to keep them dry. 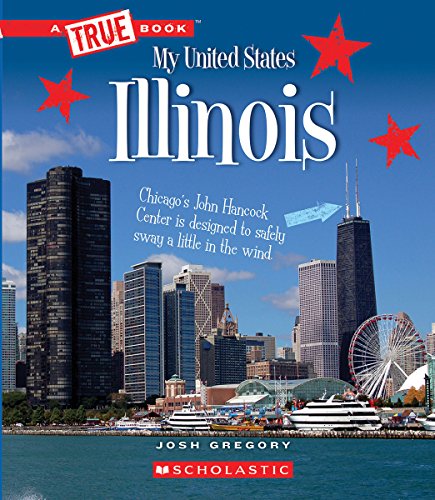 Take a trip through this Midwestern state and find out what makes Illinois so interesting.

Home to both huge amounts of farmland and one of the nation's biggest urban centers, Illinois offers its residents a diverse range of lifestyles.

Readers will find out what businesses drive the local economy, what people do for fun, and more. 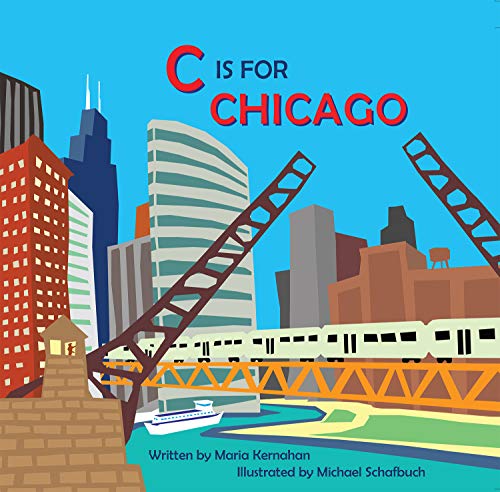 C is for Chicago (Alphabet Cities)

This A-Z tour of the Windy City takes readers through iconic landmarks in the Second City, including Millennium Park and “The Bean”, Grant Park and Buckingham Fountain, The El, The Chicago River, and Navy Pier. 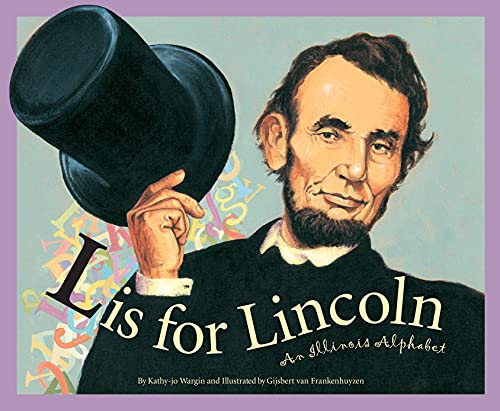 L Is for Lincoln: An Illinois Alphabet (Discover America State by State)

The home of one of America's most revered Presidents is also home to American icons such as the Ferris wheel, Montgomery Ward stores, and John Deere tractors.

This latest offering from the award-winning team of author Kathy-jo Wargin and illustrator Gijsbert van Frankenhuyzen is sure to be a must-have for every "Illini."

What book about Illinois for Children are you planning to read first?