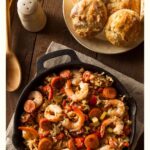 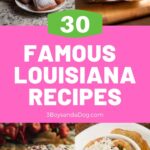 These Famous Louisiana Foods include beignets, po’boys, King cake, gumbo, jambalaya, andouille sausage, and praline pecans. These popular recipes will remind you of the best part of being in Louisiana.

Don’t forget to check out this Louisiana Unit Study as well to learn more about fun state facts and history.

Louisiana is known for its jazz music, Creole and Cajun food, swamps, and the Mardi Gras festival. New Orleans, is filled with people from all different cultures which truly makes for a melting pot of foods.

These 10 food categories include three recipes each from notable professional chefs and home chefs with the recipe testing and dish development done for you. All you need to do is enjoy the wonderful combinations that make these dishes uniquely Louisiana.

Beignets are dough fried in oil which puffs up into big square balls and then topped with powdered sugar. They are best served hot with a cup of chicory coffee.

These sandwiches are served on a long hoagie roll and stuffed with meat and topped with lettuce, tomatoes, and pickles. While shrimp is the most popular filling for a Po’boy, you can also get fried oysters or beef and gravy as well.

King cake is the traditional cake made to celebrate Mardi Gras. It’s a sweet bread, rolled in cinnamon sugar and decorated with green, purple, and gold icing and sugar. It’s often filled with cream cheese, chocolate, praline, coconut, or strawberry jam. The most unique thing about this cake is the tiny toy baby baked in the cake. The person who finds the baby is named the “king” or “queen” for the day.

This dish is made with shrimp, simmered in a roux, and onions, bell peppers, celery, tomatoes, green onions, and parsley. It’s often served on top of rice.

This famous Louisiana food is a thick and hearty stew is made with chicken, sausage, and shrimp in a dark roux, veggies, and served over rice. It’s often spicy and always delicious!

These small fried balls are made with boudin sausage shaped into balls, breaded, and then fried. It’s often served with dipping sauce.

This spicy sausage is delicious in Jambalaya, stuffed peppers, or skillet pasta.

These candied pecans are made with sugar, butter, baking soda, salt, vanilla, and cream. They are a no-bake dessert that are delicious little snacks.

A few omissions here...crawfish etouffee needs to be on the list.

French bread for a po boy...nothing else even comes close.