These Louisiana State Books for Kids are sure to please and fascinate your children as they learn all about the state of Louisiana.

These books contain so much information about the long and varied History of this great State as well as stories about people from Louisiana.

The following Louisiana-themed books for kids cover all aspects of the home-school education coin – from picture books to workbooks; from learning to read up to chapter books! 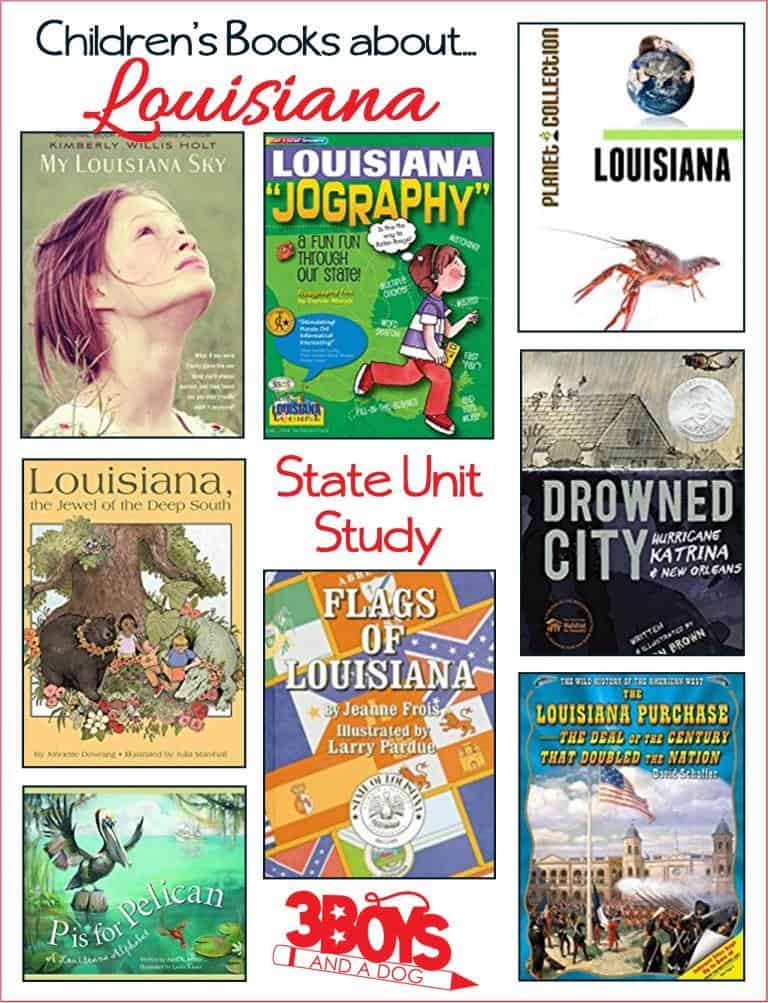 In Flags of Louisiana , Frois provides detailed descriptions of the designs, symbols, and stories of the all the national flags that have flown over Louisiana. She also includes parish and city flags in this informative and useful historical guide for all ages.

American author who wrote mainly adventure stories for boys in the early 20th century. These included such series as The Battleship Boys, The Range and Grange Hustlers and The Pony Rider Boys. This latter series was one of the earliest examples of a children’s pony series – possibly the first ever to feature a riding club – and concerned a group of young lads who formed a pony group and set off on various adventures with their ponies. It is mainly of the western/ranching persuasion with plenty of adventure and danger thrown in, and is unashamedly aimed at boys. It was a fairly long series and may have gone on further but for the death of the author in 1925.

Are you ready to take an imaginary trip? You’ll travel in style in a 1966 Mustang convertible with Indigeaux and Jazz. Come along and see some famous Louisiana landmarks. Climb in and buckleup because you are in for quite a comical and adventurous ride! Of course, it’s only a pretend trip in Indigeaux’s dream…or is it?

A geography of Louisiana, covering its weather, climate, land contours, soils, vegetation and resources; and investigating the effects man has had on its landscape, from the prehistoric Indians through the industries and urbanization of the present.

In this story about a crawfish taken from his home in South Louisiana, the great grandaddy crawdaddy battles boats, dogs, pool robots, and boiling pots. Throughout his journey he never gives up and becomes a local legend. This book is dedicated to the strong kids who made it through The Great Flood of 2016 and the fine, time honored tradition of crawfish boils.

Louisiana Geography-Statistics say most kids know less geography than ever-don’t let that apply to your students! Start by making sure kids know the main places & geographic features in their own state. Give them activities that pretend they are taking a cross-state bike tour, using free football game passes, jogging through the state, etc.

As a part of the updated Planet Collection, “LOUISIANA” offers facts, descriptions and thought inspiring questions alongside amazing photographs of Louisiana.

Toddlers and babies will love looking at the large photos, while the older children will be able to grow their minds through reading the fun fact filled passages.

The Big Louisiana Activity Book! includes 100+ activities, from Kindergarten-easy to Fourth/Fifth-challenging! This big activity book has a wide range of reproducible activities including coloring, dot-to-dot, mazes, matching, word search, and many other creative activities that will entice any student to learn more about Louisiana. Activities touch on history, geography, people, places, fictional characters, animals, holidays, festivals, legends, lore, and more.

On her own in the maze of the dangerous bayou, Lily knows she has more to fear than her father’s wrath. Her treacherous journey will test both her knowledge of the swamp and her courage. Can she find Paul before it’s too late?

The tales are given first in the Creole dialect, then in a faithful but not literal translation, as it is desirable to preserve the interest of the story. The study of the Creole dialect is of importance and interest, and the tales have been carefully written in Louisiana dialect, in order that the material may be of use to the philologist.

Little Pierre may be small, but he’s got more marbles rolling round in his itty-bitty noggin than his four big, lazy brothers heaped together. Yet they just call him runt and ignore him. Course, when the good-for-nothing brothers flub their attempt to rescue a damsel in distress from the Swamp Ogre, it falls on Little Pierre to rescue them.

Grade 5-8–In the first book, Schaffer discusses how the young United States balanced the competing interests of Britain, France, and Spain to successfully negotiate the purchase of the Louisiana Territory. He provides background about the settlement and colonization of Louisiana and also explains how the ambitions of leaders such as Napoleon, slave-leader Toussaint-L’Ouverture, and Thomas Jefferson influenced the negotiations and final sale. In the second title, Young explains how the machinations of pro- and antislavery organizations and settlers produced a constitutional crisis and armed conflict, including John Brown’s infamous Pottawatomie Massacre, in territorial Kansas in the years before the Civil War. The author also explains how the political and armed conflicts in Kansas foreshadowed the division and violence of the Civil War. Both books feature an opening chapter that captures a pivotal event, followed by a more thorough examination of the topic, including background, a narrative of events, and objective analysis of its importance. Maps, reproductions of period photos and illustrations, and screen shots of the recommended Web pages appear throughout. Each volume has a listing of those URLs, including some that are highlighted as an Editor’s Choice.

Learn the history of Louisiana with this book by award-winning musician Johnette Downing. Once again, she honors the cultural heritage and traditions of the South through her music and literature. Accompanied by stunningly accurate illustrations, Downing takes you through a tour of the state’s famous symbols. Did you know that the crawfish is the state crustacean? Or that the Catahoula is the state dog?

What’s so great about Louisiana? Find out the top ten sites to see or things to do in the Pelican State! We’ll explore Louisiana’s festive cities, famous swamps, unique wildlife, and vivid history. The Louisiana by Map feature shows where you’ll find all the places covered in the book.

One of the most popular misconceptions about American Indians is that they are all the same-one homogenous group of people who look alike, speak the same language, and share the same customs and history. Nothing could be further from the truth! This book gives kids an A-Z look at the Native Americans that shaped their state’s history.

Take a trip through the Pelican State! Learn about Louisiana’s history, geography, weather, people, and more in this book that’s all about our 18th state.

Set in the South in the late 1950s, this coming-of-age novel explores a twelve-year-old girl’s struggle to accept her grandmother’s death, her mentally deficient parents, and the changing world around her. It is a novel filled with beautiful language and unforgettable characters, and the importance of family and home.

From its festive Mardi Gras parades to its wildlife-filled swamps, Louisiana is a state of great diversity. P is for Pelican: A Louisiana Alphabet is an alphabet book that introduces readers young and old to the culture, history, and wonders of this Gulf state.

Poor Monsieur Gator is getting old and is moving so slow he can’t catch himself a taste of possum or otter, or even a whiff of skunk. Day after day those animals tease and taunt him until, finally, he decides to cook up some gumbo just like Maman used to make. But who will help him boil, catch, sprinkle, and chop? Certainly not rude Mademoiselle Possum, ornery Monsieur Otter, or sassy Madame Skunk. But when the gumbo is ready, they’re more than eager to enjoy the result of Gator’s hard work and as they run to get a taste – “Slurp! Slip! Plop! Them animals go into the pot.” “Mmm-mmm,” says Monsieur Gator. “Now, this is gumbo just like Maman used to make.”