Are you in the mood for some great baseball movies for kids? This list will be perfect for anytime you want to cuddle up and watch one!

This list of movies will get everyone in the mood to watch more! Theyre all entertaining and are a throw back to some of the good ol movies! Be sure to check out my Movies for Kids (Family Fun: Movie Night) for even more great ideas!

While only one plays, all three of my boys LOVE Baseball.  When we play movie nights and when we purchase sports movies are always on the lists!

My husband asked me to compile a list of Baseball Movies for Kids so we could find some new ones (or oldies but goodies) to watch before the kids go back to school and he goes back to work.

If you are planning a baseball-themed night or baseball party, be sure to check out these baseball fonts, too, for help with decorating!

From funny to heartwarming, all of these baseball movies for kids are sure to please your little slugger! 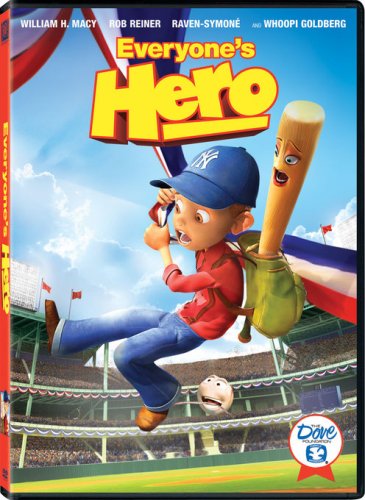 Ten-year-old baseball fanatic Yankee Irving (voiced by newcomer Jake T. Austin) is always the last one picked for sandlot baseball games. But when Babe Ruths prized bat is stolen during the 1932 World Series, Yankee steps up to the plate to help retrieve it for his beloved idol. He embarks on a wild cross-country journey that teaches him the stuff real heroes are made of, and along the way, Yankee learns the importance of perseverance and the true meaning of friendship. 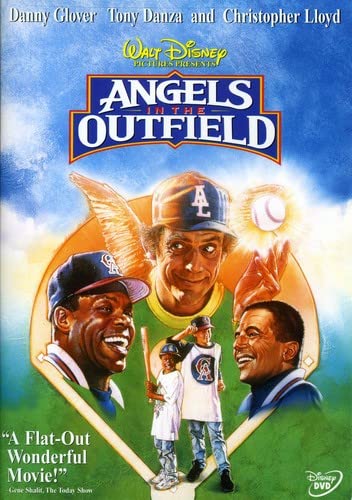 Angels In The Outfield

Catch the movie that flew over the fence and into the hearts of millions of cheering fans! Its Disneys ANGELS IN THE OUTFIELD, the feel-good film about a young boy praying for a father - and a struggling baseball team praying for a pennant. Danny Glover plays George Knox, the frustrated coach of the California Angels, a ragtag team of major-league misfits who are down on their luck. But things begin to look up when 11-year-old Roger, their biggest fan, starts giving Knox some winning tips from a real live angel named Al (Christopher Lloyd). The team miraculously climbs back into the pennant race … all the while learning to believe in themselves. With its heavenly mix of outrageous comedy, dazzling special effects, and amazing baseball action, Disneys ANGELS IN THE OUTFIELD is an entertainment home run for the whole family! 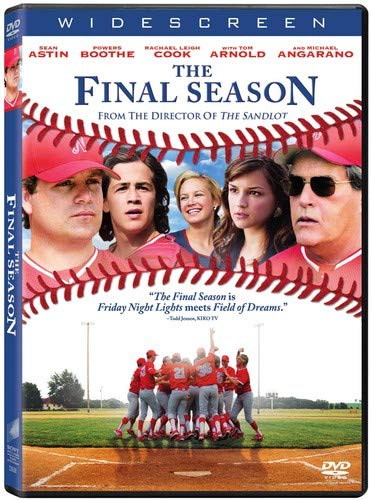 From the director of The Sandlot comes the true story of an underdog coach and the team that must defend their legacy against insurmountable odds. In the small town of Norway, Iowa, the high school baseball team, led by legendary Coach Jim Van Scoyoc (Powers Boothe, TVs Deadwood), has won 19 State Championships. But the small town heroes are dealt a series of unexpected blows that threaten to rob them of their 20th championship win. When talk of a school merger gets serious and Coach Scoyoc is fired, then replaced by his 24-year-old assistant, Kent Stock (Sean Astin, Rudy and The Lord of the Rings trilogy), failure seems inevitable. Tom Arnold, Rachael Leigh Cook and Michael Angarano join an excellent ensemble cast in this inspirational family gem. 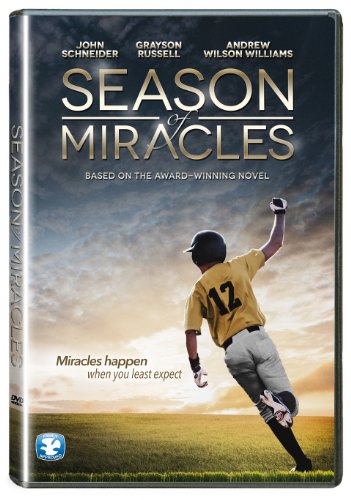 Based on the award-winning novel by Rusty Whitener, Season of Miracles follows the Robins, an underdog Little League team through their 1974 season with newcomer and autistic baseball savant, Rafer. Team leader Zack takes Rafer under his wing despite taunting from their rivals, the Hawks. Their Coach, and the rest of the Robins encourage Rafer as the team rises towards an unlikely championship season, that is less about winning and losing and more about living and dying. Season of Miracles is a life-inspiring story about sportsmanship, friendship, love between a father and son, and courage in the face of adversity. 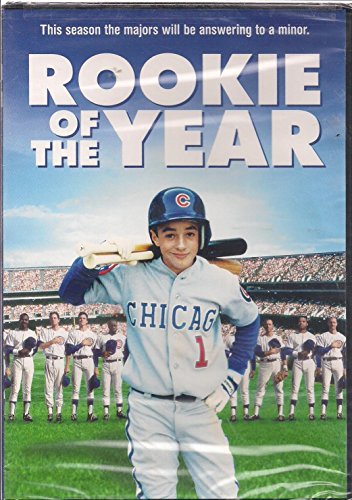 Rookie of the Year

When the cast is removed from his severely broken arm, clumsy 12-year old Henry Rowengartner (Thomas Ian Nicholas) is shocked to find his arm has become a 100 mile per-hour thunderbolt. His throw from the bleachers directly to home plate alerts the last place Chicago Cubs and before you can shout play ball! he is signed as their new ace pitcher. With a few pointers from an aging star pitcher (Gary Busey) young Henry actually manages to pull of the impossible. 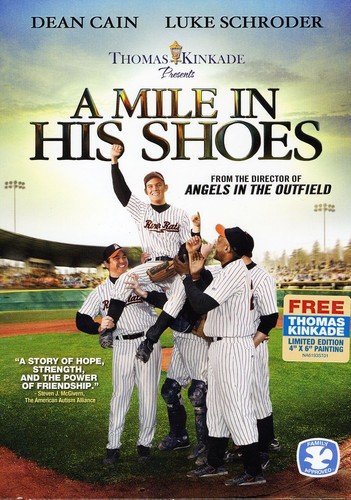 Mile in His Shoes

Only a miracle can help baseball coach Arthur Murph Murphy (Dean Cain) and his losing minor league baseball team. As Murph sets out to recruit new talent for the team, he stumbles upon Mickey (Luke Schroder), a young farmer with an incredible pitchers arm. However, Mickeys parents are reluctant to allow him to join the team because he has Aspergers syndrome, a form of autism. Murph convinces Mickeys parents that life in the minor league will benefit their unique son, but he doesnt realize just how much his new recruit will help the teams game and, more importantly, their spirit. Based on the novel The Legend 0f Mickey Tussler by Frank Nappi. 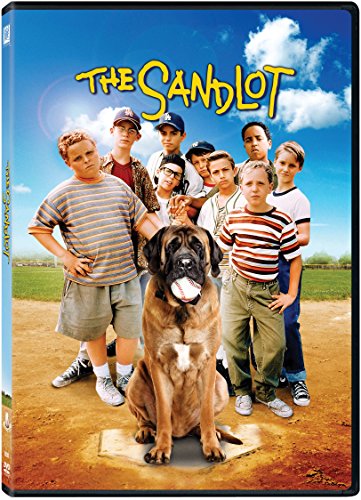 Its the early 1960s and fifth-grader Scotty Smalls (Tom Guiry) has just moved into town with his folks (Karen Allen and Denis Leary). Kids call him a dork-he cant even throw a baseball! But that changes when the leader of the neighborhood gang recruits him to play on the nearby sandlot field. Its the beginning of a magical summer of baseball, wild adventures, first kisses, and fearsome confrontations with the dreaded Beast and its owner (James Earl Jones) who live behind the left field fence. Soon nine boys have become best friends, Scotty is part of a team, and their leader has become a local legend in this hilarious and warmhearted comedy. 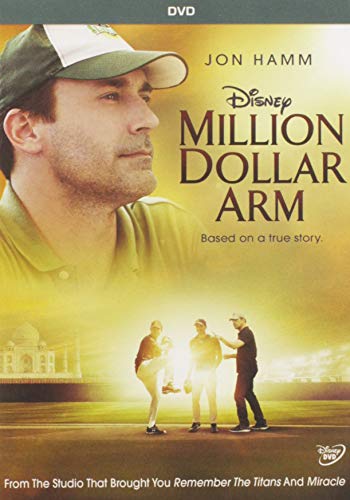 From the studio that brought you REMEMBER THE TITANS and MIRACLE comes MILLION DOLLAR ARM - a true inspirational story of self-discovery, second chances and personal triumph in the face of adversity. In a last-ditch effort to save his career, sports agent JB Bernstein (Jon Hamm) dreams up a wild game plan to find Major League Baseballs next great pitcher form a pool of cricket players in India. He soon discovers two young men who can throw a fastball but know nothing about the game of baseball. Or America. Its an incredible and touching journey that will change them all - especially JB, who learns valuable lessons about teamwork, commitment and family. 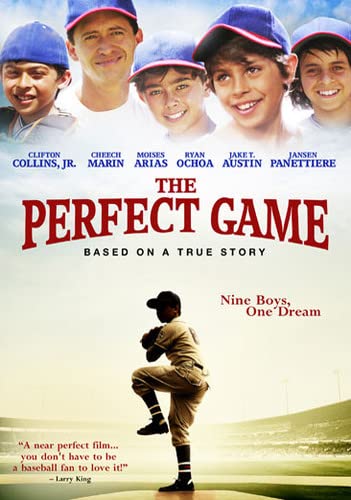 Clifton Collins Jr. (Star Trek) heads an all-star line-up of some of Hollywoods brightest young stars as Cesar, who returns to his native Monterey, Mexico after his major league career is cut short. Moises Arias (Hannah Montana), Jake T. Austin (Wizards of Waverly Place) and Ryan Ochoa (iCarly) costar as impoverished baseball-loving kids who recruit him to coach their rag-tag team. Together, they beat the odds and overcome hardships and bigotry to compete in the 1957 Little League World Series.

What are some good snacks for movie night?

Everyone knows that snacks are all part of the deal! To plan the best movie night possible, grab some chips, dip, fresh fruit, popcorn, and more! Some of my favorite movie night snacks are:

What are some fun ways to set up a movie night?

If the weather is nice, set up a projector or screen and watch the movie outside! This is such a fun way to experience a different view and enjoy a good move in the process.

You can also make some fun areas in the living room where everyone brings their own blankets and pillows and just create a giant movie area that is full of comfort!

I hope you and your kids have fun watching these Baseball Movies for Kids as part of your next party or movie night!

Some of the best movies are baseball movies! Thanks for linking up at the Thoughtful Spot Weekly Blog Hop! We hope you join us again next week!