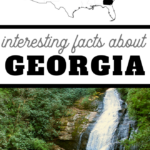 Georgia is the next state in our unit study series as we journey around the United States in our homeschool. Explore these interesting facts about Georgia state and learn about its vivid history.

Learn more about the rest of the states with the 50 states unit study as we travel around America. Don’t miss out on these facts about the state of Georgia.

Don’t get Georgia mixed up with the country Georgia! America’s Georgia is best known for peaches and its history with Coca-Cola, but this state has been home to several amazing people in history, plus is known for having some “oldest” things in the US (like oldest state park) or the world’s largest sculpture.

Home to 159 counties, Georgia is the largest state east of the Mississippi River! It’s also home to the University of Georgia, one of the top colleges in the world.

Georgia’s known for a lot of things: it has played a pivotal part in America’s history, the rich variety of birds, and inventing the Cherokee alphabet. Learn more about Georgia with these five facts.

Fact One: Georgia’s nickname is the Peach State.

Ever heard the phrase “Georgia peach?” That’s because Georgia is best known for its peaches! Georgia’s created a reputation for creating the most high-quality peaches. They’re known for the best texture, quality, and flavor. If you ever find yourself in Georgia, peaches are a must-have! (Georgia also is known for their Vidalia onion growing, too!)

Learn more about peaches with these extended resources:

James and the Giant Peach by Roald Dahl is probably the most famous book about peaches.

A Peck of Peaches by Carol Craine is a fun counting book inspired by Georgia! It’s also been called P is for Peaches.

Who doesn’t love the smell of peach? Try to make this 10 minute DIY peaches and cream soap.

This single incident didn’t stop racism, but Jackie played a major role in the Civil Rights Movement and was one of the first figures to spark change throughout the nation.

Learn more about Jackie’s life and legacy with these ideas:

Make your own Jackie Robinson with this simple construction paper craft.

Dad. Jackie and Me by Myron Uhlberg is a picture book about Jackie Robinson from the view of a young boy watching a baseball game with his father.

Child of the Dream: A Memoir of 1963 by Sharon Robinson is a children’s memoir written by Jackie Robinson’s daughter.

As an edible snack, make these baseball pretzel bites.

If you’ve been in Atlanta, you know that Pepsi is virtually unheard of! Atlanta is the home base of the Coca-Cola brand, and most stores, restaurants, and vending machines only have Coca-Cola products.

The Coca Cola bottle is a classic for a reason: a lot of thought went into the classic shape that made Coca-Cola famous.

Create a flying airpline out of cardboard and Coke bottles!

Make your own DIY no-Borax slime with this simple Coca Cola slime!

Grab a Coke bottle to make a windchime.

Go outside and try this Mentos and Diet Cola experiment.

Learn more about the Cherokee rose and the Trail of Tears here:

In the children’s book Soft Rain, which is the story of a young girl’s experiences on the Trail of Tears.

For beginning readers, this early reader, The Trail of Tears, might work best.

The Blue Ridge Mountains, 500 miles long, is the highest peak of Georgia. The elevation is over 6,500 feet!

From stunted oak and hickory forests, the Blue Ridge Mountains have a rich variety of wildlife and offer some of the best views in Georgia.

M is for mountain! Try this M shaped mountain craft.

With different layers of paint, try these painted reflections.

If going camping in the mountains isn’t possible, try this camping fire craft.

Atlanta: 14 Things to do with Kids!

Books about Georgia for Kids

Savannah: 11 Kid-Friendly Things to Do!

Always fancied a trip to Georgia, love to taste those famous peaches. Great post Kelli, thanks for sharing.