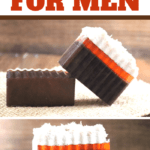 I made this amazing homemade Guinness soap for men as a gift for guys in my life. So easy, but he’s definitely going to love it and you’re going to love making it!

If you’re here for all the awesome soap you can imagine, be sure to check out this manly essential oil soap. It’s everything your dude needs in a soap.

But back to this amazing soap for men. It’s truly like bathing with a bottle of stout and, I’m here to tell you, that is not a bad experience. I thought it might be weird, but as I tested a bar, you know, for science, I realized how wrong my assumption was–and how awesome it was that I made this soap.

Because it’s going to make a great gift–and possibly giftS as I’m beginning to think that ALL the men in my life might need a bar of Guinness soap.

What You Need to Make This Homemade Soap for Men:

When making this Guinness soap at home, you really need to have the following Amazon affiliate supplies to get that Guinness smell and look.

When making soap at home, you really need to have the following Amazon affiliate tools on hand.

This might seem difficult to come up with unique and fun recipes, but it turns out that with a few tweaks, you can take those natural colors and coconut oil and turn them into something truly unique.

This beer soap is one of my favorite glycerine soaps I’ve ever made. It just smells so good. Although, if I did it again, I might include a bit of activated charcoal on the bottom, to give it just one more slightly darker layer…I don’t know, just a thought.

Anyway, all that to say that, on the main, all soap is the same. That’s why I put together this quick tutorial of Four Ways to Make a Soap Base, so that you can make just about anything fun from a basic soap. There are enough recipes on my site that you could easily start your own soap-making business from home!

Now, let’s be straight-up honest, there’s probably no health benefit of rubbing Guinness-scented soap on your body. There’s no actual Guinness in this DIY soap, just a scented oil.

But, anyway, all that to say that Guinness really does have “benefits”, including increased bone density and help with weight loss. Wild, huh?!

Again, though, not really applicable to soap. Just a fun tie into how awesome it will be for your guy to smell like Guinness after a shower, huh?!

Once you’ve made this awesome soap for your guy, you’re going to see just how fun it is to give him his own fun-smelling soaps. He’s seriously going to love it. So, I’ve pulled together some extra recipes for manly soaps that you’re definitely going to want to make him.

Did you make this?