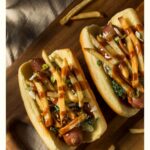 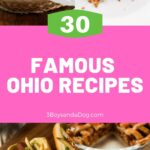 Don’t forget to check out this Ohio Unit Study as well to learn more about fun state facts and history.

Ohio is known for its Big Ten football team and The Ohio State University. It’s filled with lakes, forests, and borders the Great Lakes.

These ten food categories include three recipes from notable professional chefs and home chefs, with the recipe testing and dish development done for you. All you need to do is enjoy the wonderful combinations that make these dishes uniquely Ohio.

Buckeyes are a dessert made out of peanut butter balls and then coated in chocolate. They look like buckeye nuts that grow on trees in Ohio.

These sandwiches are piled high with sliced beef, swiss cheese, Russian dressing, in between slices of rye bread.

This chili is spiced with cinnamon and allspice, served over spaghetti, and topped with shredded cheddar cheese and diced white onions.

Pierogi are dumplings of chewy dough filled with savory or sweet ingredients, folded over, and boiled. They are then tossed in either butter or a sweet or savory sauce depending on the filling.

This Cleveland staple is messy and delicious. Smoked, grilled kielbasa is served in a hot dog bun and topped with barbeque sauce, french fries, and coleslaw.

This tart and flaky pie is made by macerating thinly sliced lemons and combining them with eggs and sugar. It’s then topped with pie crust and baked until the crust is golden brown.

This famous Ohio recipe is made by slow-cooking chicken and cream of chicken soup and then pouring in the stuffing mixture until it’s softened. It’s served on hamburger buns and eaten for dinner or brought to potlucks.

Slow-cooked spare ribs coated in barbecue sauce are a favorite in Ohio. You can make them in the oven, crockpot, or smoker.

Thinly sliced steak is coated in eggs and flour and then fried. It’s served as breakfast with eggs, hashbrowns, and bacon.

Apple orchards filled the fields in Ohio and fresh apple pie is a famous Ohio recipe. Sliced apples are tossed with cinnamon, lemon juice, and sugar, and laid in pie crust, and topped with another layer of dough. It’s baked until the apple are soft but not mushy and the top is golden brown.