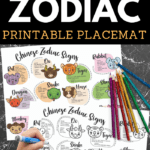 This fun Chinese Zodiac Placemat Printable is so much more than a simple placemat-there are several great ideas to use it and get the kids having a great time too!

If youre just here for fun printables, though, be sure to check out my unicorn printables here so you can add a little encouragement to your wall art!

This Chinese Zodiac Placemat Printable really is super cute, though, right?! I mean, those little faces and the blobs-not circles. I dont know, I kind of love it.

So, lets dive in to what this free printable is!

What are the Zodiac Animal Signs?

Each year is assigned an animal which embodies the spirit of the people born in that year. Here are the signs and the years designated for each:

There are two versions of this printable Chinese New Year Zodiac Printable Placemat: a color version and one thats a black and white coloring sheet for the older kids to decorate themselves.

So, in addition to this being a handy-dandy placemat to keep from being a Messy Marvin, it can also be an activity to keep the kids from being so bored you need a screen to keep them from whining!

Fun ways to use this printable:

Sometimes, you see a printable and youre like: oh thats cool, but what do I do with it?! And I honestly have a ton of printables on a hard drive sitting there, never used, because theyre basically purpose-less.

That is not the case for this awesome free printable Chinese zodiac placemat.

Im calling it a placemat, but honestly, theres so much more fun to be had.

Look, I love eating out sometimes as a treat, but my least favorite part is that the kids whine constantly. ITs what inspired me to make this awesome placemat-give them something fun to color and were in business!

The boys and I were talking about making a set of laminated placemats to have on Chinese food night! We could use them over and over!

Activity for a Party

If youre having a Chinese New Years party, this is the perfect activity for the kids! Just hand them each a set of coloring pencils and a flat surface to color on.

These Chinese New Year Color By Number Pages from In The Playroom are sure to help your children understand the Chinese Zodiac just a tad bit more!