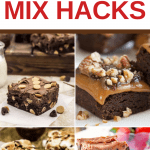 Do you have several brownie mixes that you want to use up? Gone are the days that you have to use brownie mix and make it boring or spend hours making brownies from scratch.

There are several boxed brownie mix hacks you can use to make your desserts more exciting than ever.

I’ve gathered the BEST brownie recipes out there for you. We’re talking everything from brownie cookies to brownie ice cream – they are fun, but even better, they taste great!

Your mouth may be watering already, but now you have to choose which brownie recipe you will make first.

Continue reading to discover some of the best brownie recipes out there. I don’t think you can go wrong with any of these recipe hacks.

Forget what you know about regular brownies and dive into these amazing recipes, you won’t regret it.

One of my ultimate favorite boxed brownie mix hacks are these Chocolate Reeses Peanut Butter Brownies from 3 Boys and a Dog.

If you love oatmeal and a chewy brownie batter mixture, then these Chewie Brownie Oatmeal Cookies from Oh my Sugar High are for you!

Have you ever had the most amazing brownies ever? I’m talking about these Millionaire Brownies from What a Girl Eats.

Ah, yes! Brownie Cookies are every mom’s dream come true. This recipe from New South Charm is worth making.

I love mixing recipes together and one of my favorite box brownie hacks is these NFL Snickers Brownies Snickerminis recipe from 3 Boys and a Dog. If Snickers are some of your favorite candy bars, you just can’t go wrong with it.

Box brownie hacks are something we can all do when we make these Cherry Cheesecake Brownies from Savvy Mama Lifestyle!

If you’re in the mood for some graham crackers and marshmallows with your brownies, then you’ll want to try this Brownie Smores recipe from 3 Boys and a Dog.

I’ve always been a frosting girl, but I also love brownies, so you know Who Need a Cape has already rocked this Triple Layer Frosted Brownies recipe.

Peanut Butter Pie with Brownie Crust from Smart Savvy Living is one of those boxed brownie mix hacks you don’t want to miss out on.

Have you ever had Nutter Butter Stuffed Brownie Bars from Persnickety Plates? If not, this recipe is about to make you a new fan.

Oh, like cream cheese? These Brownie Bottom Peanut Butter Cheesecake from Persnickety Plates are equally amazing. Make sure you take the time to make your own.

These next boxed brownie mix hacks are going to make you drool. Including this Chocolate Brownie Ice Cream recipe from Family Food and Travel.

What about when us brownie lovers are in the mood for a little ice cream? Pint Sized Baker has made the perfect treat with this Chocolate Brownie Ice Cream.

Check out these Potluck Picks Turtle Brownies from 3 Boys and a Dog. My mouth is watering just thinking about making this!

You just can’t go wrong with these Brownie Ice Cream Sandwiches from Pint Sized Baker either.

Now for you chocolate lovers that also dig brownies, these Ultimate Double Chocolate Brownies  from This Mama Cooks are amazing.  Chocolate chips in rich chocolate brownies? My favorite!  Oh man, if you slather on some chocolate icing after you bake brownie, even better!

This Mama Cooks has also created these awesome Gluten Free Chocolate Cupcakes! I think we all need to give this recipe a try.

Have you ever tried Brownie Cookies? Get ready because Sugar and Soul has given us this great recipe.

Billionaire Bars are from Sugar and Soul are a great twist on traditional brownie box mix hacks. Give it a try!

How to Store Brownies:

If you go on a brownie making kick, like I may or may not have… (ahem…), then you are going to need to store your brownies.

Once you have cut your brownies into squares and allowed them to cool completely, you can store them for up to about three days in an airtight container.

Can I freeze homemade brownies?

I suggest that you don’t try freezing a cheesecake layer as they ten to sweat in the defrosting process.

How do I defrost frozen brownies?

To thaw the brownies, unwrap them from the foil and plastic wrap. Then, let them stand at room temperature for 3-4 hours before cutting into squares or bars.

A large serrated knife, such as a bread knife, is useful for cutting brownies as you can use a sawing motion to break through the top crust then press down to cut through the softer brownie underneath.

Wipe the knife between each cut to get clean edges to the slices.  A thin wire or fishing line also works very well for uniform squares or bars of brownie.

You can't go wrong with brownies. Congrats you are being featured at Thursday Favorite Things. https://eclecticredbarn.blogspot.com/2019/04/thursday-favorite-things.html Hugs, Bev

These brownies are just amazing! Thanks so much for sharing with us at Full Plate Thursday and hope you are have a great week! Miz Helen

Great recipes! Each one looks better than the next and I love all your helpful hints!

All the chocolatey goodness is making me drool!